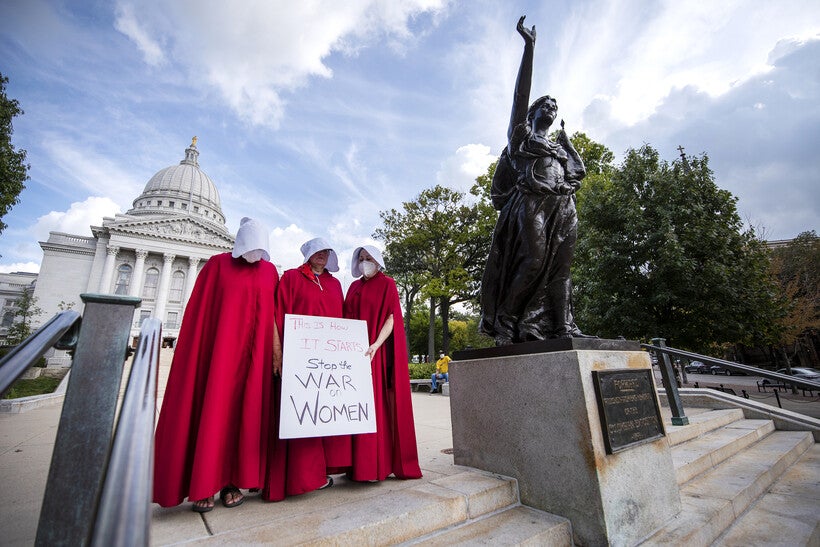 A 172-year-old state law that makes providing an abortion a felony in Wisconsin could go back into effect if the U.S. Supreme Court overturns Roe v. Wade — a prospect many say is possible within the next year.

The nation’s highest court is set to hear arguments Wednesday in an abortion rights case that challenges the constitutionality of a Mississippi law that bans most abortions after 15 weeks of gestation. It's unclear how broadly the court will choose to rule in the case, but many believe justices have a rare opportunity with their decision to strike down federal abortion protections guaranteed in 1973 by Roe v. Wade. After three appointments by former President Donald Trump, the court has a 6-3 conservative majority.

If the federal abortion protections are slashed, states would be left to govern restrictions. Some states, including Wisconsin, never repealed abortion bans that existed before and were made unenforceable by Roe v. Wade. Those bans would go back into effect if the 1973 ruling is overturned. Wisconsin’s law, written in 1849, makes providing an abortion a felony, with penalties of up to six years in prison and a fine of up to $10,000.

Tanya Atkinson, president and CEO of Planned Parenthood of Wisconsin, said Wednesday’s Supreme Court arguments "could have an indelible effect on abortion access in the state of Wisconsin."

"Abortion is at greater risk than it’s ever been in over 50 years," she said.

Democratic state lawmakers have introduced a bill that would repeal the nearly centuries-old abortion ban, but the plan hasn’t gotten anywhere in the Republican-controlled state Legislature.

"Our Republican-led Legislature has done everything in their power to restrict access to abortion in Wisconsin and continue allowing this criminal abortion ban to stay on our books," Atkinson said.

Current state restrictions on abortion, all of which are enforceable under Roe v. Wade, include a ban on abortions after 20 weeks, a 24-hour waiting period and an ultrasound prior to the procedure.

Gracie Skogman, legislative director at Wisconsin Right to Life, called Wednesday’s action before the Supreme Court "the biggest case within the pro-life movement in 30 years." She also acknowledged the court’s decision, which is expected sometime before the end of July 2022, could have major implications in Wisconsin.

"We have a very powerful framework already in the state if (Roe v. Wade) was either overturned or weakened," Skogman said.

However, Skogman also said the 1849 law could face obstacles if it were to go back into effect, including choices by some law enforcement officials across the state to not enforce it.

"We are concerned that there could be issues with enforcement," she said. "But that is a battle we are willing to fight."

Atkinson said Planned Parenthood, which is one of only two abortion providers in the state and the only provider that offers the procedure outside Milwaukee, would not continue to provide abortions if the criminal ban went into effect, regardless of enforcement.

Atkinson noted the law does not contain exceptions for rape or incest and said, if it were to go back into effect, Wisconsin women would likely begin to travel across state lines to get abortions. She likened the possible future environment in the state to current conditions in Texas, which recently enacted an abortion ban after six weeks.

Skogman also acknowledged that Democratic Gov. Tony Evers could be an obstacle to any attempts by the Republican-controlled state Legislature to pass new abortion restrictions or to update the 172-year-old law while maintaining limits and penalties. But she noted Evers is up for reelection in 2022, and said she expects abortion to be a major mobilizing issue for some Wisconsin voters next year.

"We know that if the Supreme Court either weakens or overturns (Roe v. Wade), that puts us in a very exciting position here in Wisconsin," she said.