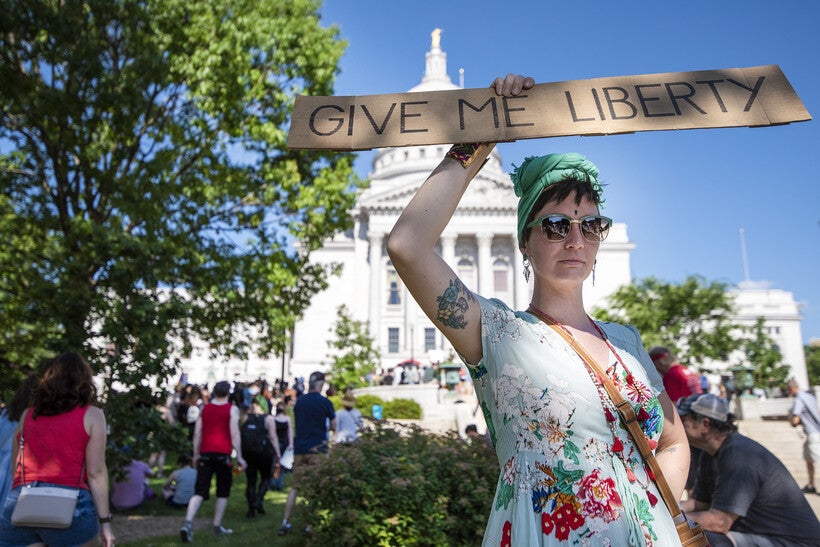 Caryn B. of DeForest holds a sign during a protest in opposition to the Supreme Court’s decision to overturn Roe vs. Wade on Friday, June 24, 2022, in Madison, Wis. Angela Major/WPR

At the direction of Gov. Tony Evers, Wisconsin Attorney General Josh Kaul has filed a lawsuit in Dane County Circuit Court seeking to block the state's 173-year-old ban on abortions that was triggered after the collapse of Roe v. Wade on Friday.

"I said last week I'd fight this every way we can with every power that we have, and that's what we're going to do," said Evers, announcing the lawsuit in Milwaukee on Tuesday. "If Republicans won't do their part — what's right — and help the people of the state, then we will."

Wisconsin adopted statutes in 1849 and 1858 banning doctors from performing abortions unless the pregnant person's life is in danger.

The U.S. Supreme Court's landmark Roe v. Wade decision in 1973 invalidated the ban. The court ruled pregnant people have a constitutional right to an abortion within the first two trimesters, when a fetus is unable to survive outside the womb, or about 23 or 24 weeks gestation.

The SCOTUS decision Friday to reverse Roe put Wisconsin's 19th century ban back into effect. Kaul has no plans of enforcing the ban, though local law enforcement officials could choose to do so. Evers said Tuesday he would grant clemency to those prosecuted under the ban. The statute of limitations is longer than Kaul’s and Evers' term.

Evers attempted to repeal the state's abortion ban prior to the SCOTUS decision. But Republican lawmakers rejected the special session, gaveling in and out within seconds.

"My office has begun receiving questions from sexual assault nurse examiners who are wondering whether they can still dispense emergency contraception, who are asking whether there's an exception under the 19th century abortion ban for rape and incest," Kaul said Tuesday. "The reality is, if that 19th century abortion ban remains in effect, sexual assault victims in Wisconsin will be required under Wisconsin law to carry their rapist's baby to term without medical intervention."

Kaul said he'll be making two arguments to overturn the ban in his lawsuit:

"I think we're right on the law," Kaul said. "Certainly, we have a 4-3 conservative majority on the court, but we've also won some very important cases before this court, and like I said, when the law's on your side, as it is in this case, I like our chances."

The Wisconsin Department of Safety and Professional Services, the Wisconsin Medical Examining Board and chair of the board, OB-GYN Sheldon Wasserman, are also plaintiffs in the lawsuit. They are suing state Sen. Chris Kapenga, R-Delafield, Senate Majority Leader Devin LeMahieu, R-Oostburg, and Assembly Speaker Robin Vos, R-Rochester.

Vos said he was confident the courts would uphold the state's abortion ban.

"Abortion isn’t health care and for the governor and attorney general to try and use the courts to enact law is just as wrong as the original Roe v. Wade decision over 50 years ago," he said in a statement.

Wisconsin Right to Life's Heather Weininger said she was disappointed a lawsuit had been filed.

"Rest assured, we’ll continue to work with the state Senate and Assembly to fight this lawsuit, and no matter what, we’ll continue our daily work of protecting mothers and babies throughout Wisconsin," she said in a press release.

Kristin Lyerly, an OB-GYN in Green Bay and a member of the liberal medical group Committee to Protect Health Care, said overturning the ban is essential to her work, and other doctors' work, in helping people deal with both wanted and unwanted pregnancies.

"Our culture revels in the joy of pregnancy — and we should — but we also have to keep in mind that every pregnancy is not joyful," she said. "Women commonly suffer from chronic health conditions that make pregnancy dangerous and even sometimes fatal ... these complications frequently threaten desired pregnancies — forcing women to make agonizing decisions when all they wanted was a healthy baby."

Kaul said he expects the suit will move through the courts fairly quickly. In the meantime, Evers said Wisconsin has been working to connect people seeking abortions to services in neighboring states, such as Illinois and Minnesota.

"We're hoping to have services available nearest to our borders as possible, but at the end of the day, that's not going to help all sorts of vulnerable women who can't cross our borders because they don't have the wherewithal to do that," he said. "This (lawsuit) on behalf of the attorney general and myself and all the women standing behind us, and men standing behind us, is a real, important one. We're going to continue to look at other avenues, we're going to continue to make sure that reproductive health services are available to women across the border, but that is an unacceptable status quo."

Editor's note: Jenny Peek and Andrea Anderson contributed to this report, and content from the Associated Press was used in this report.