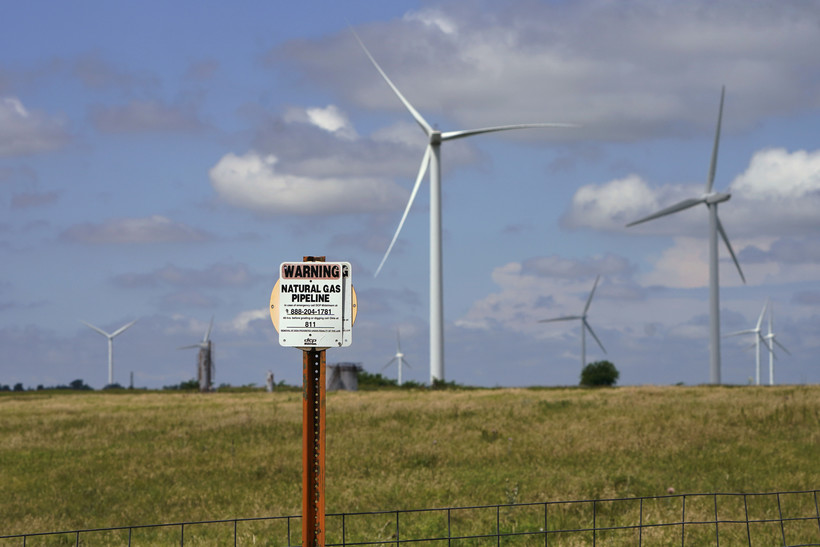 A sign for a natural gas pipeline is pictured with wind turbines behind it Wednesday, June 30, 2021, in Okarche, Okla. Sue Ogrocki/AP Photo

After the Biden administration announced plans last month to limit methane emissions, an official with the Sierra Club Wisconsin said it made "no sense" to tinker with gas regulations because much more dramatic changes are needed.

Laura Lane, chair of Sierra Club Wisconsin, said the idea that utilities need more investment in gas power as a bridge from coal to renewable energy was a "myth."

"It makes no sense to be dumping millions of dollars to build the infrastructure, to be dealing with more strict regulations," Lane said Thursday on WPR’s "The Morning Show." "We need to go with renewables and related technologies that are available."

She agreed that strict regulations can help keep people safer because, "every part of getting gas — extraction, the processing, the shipping — it’s harmful."

The Sierra Club Wisconsin with its Beyond Gas initiative lists why gas hurts the environment. The reasons include the high levels of carbon dioxide emissions that come from burning gas, air pollution and how gas plants disproportionately affect communities of color.

Bill Skewes is the executive director for the Wisconsin Utilities Association, a lobbying group for the state’s gas and electric utilities. He told "The Morning Show" there is a needed but "sometimes uncomfortable tension" between his industry and environmental activists.

"That’s not necessarily a bad thing," he said. "But it does tend to move the needle of public policy faster than all the stakeholders at the table may want to go sometimes."

The current debate often comes down to whether the investment Wisconsin utilities are making in natural gas is helpful or wasting valuable time in the fight against climate change.

Skewes said natural gas has about half of the greenhouse gas emissions than the coal units that utilities are trying to replace.

"That’s pretty big," he said, adding that utilities are "committed to a goal of being carbon neutral by 2050 — and some are even accelerating that."

In 2019, Gov. Tony Evers set a goal for Wisconsin to consume carbon-free electricity by 2050. His executive order created the Office of Sustainability and Clean Energy.

Last month, the state’s largest utility company — WEC Energy Group — announced its plans to move away from coal by 2035. The company that owns We Energies and Wisconsin Public Service also expects coal to be less than 5 percent of its power mix by the end of the decade.

Lane reiterated points Sierra Club Wisconsin has made previously, saying natural gas is too harmful for the environment on its own to only look at it as being better than coal.

"For utilities, reliability is job one," he said. "So, there has to be a power plant running for when the wind doesn't blow and the sun doesn't shine."

When asked what speed utilities should be moving at — given that there might only be about a decade left to prevent climate change catastrophe — Skewes said he would borrow a line from an industry executive. He said utilities must move at the speed of value for their customers.

"Utilities and regulators have to listen to all sides and try to strike that energy balance where economics and environmental concerns converge," Skewes said.

Customers have already been warned about seeing hikes in their utility bills this winter.

In October, We Energies estimated the cost of heating homes would go up by $25 per month for residential customers under a typical winter. That estimate was $40 more per month for Wisconsin Public Service customers.

Lower supply and higher demand worldwide for natural gas is part of the reason the natural gas prices, which had been relatively cheap in recent years, are going up.

Additionally, Xcel Energy and Alliant Energy customers will see higher electric and natural gas rates next year after state regulators approved settlements between the utilities, consumer advocates and business groups. The rate increases are supposed to recover costs associated with the transition to clean energy. 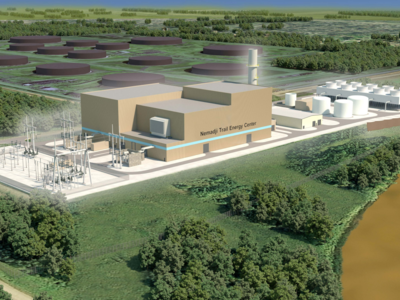 Lane also questioned the wisdom behind building the Nemadji Trail Energy Center, a proposed $700 million natural gas power plant in Superior. The project has faced and cleared legal challenges and is slated for construction in 2025.

She said it is "shortsighted" to make such a big investment when everyone should be moving further toward renewable energy, not natural gas.

"It’s absolutely the wrong way to go," she said.

Skewes said renewable energy sources are great and a growing part of their energy mix. But he stressed the importance of having a diverse mix of fuel, so utilities are not too reliant on any one source.

He doesn’t think utilities should ignore a "cheap (and) domestic" fuel supply in natural gas.

"Even if it doesn’t take us all the way to a zero-carbon future, it’s clearly a big step in the right direction," Skewes said. "In short, I guess you’d say you can’t let the perfect be the enemy of the good.”