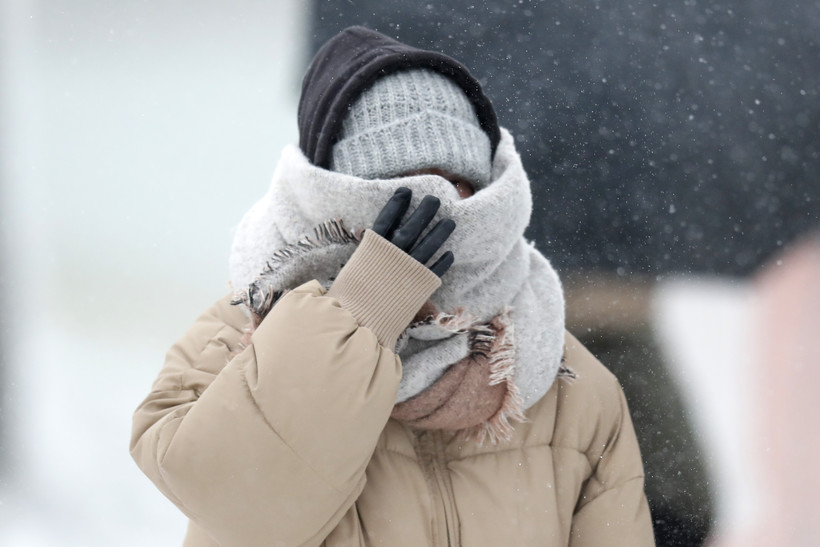 A woman walking the half mile from the Chicago Aquarium to the Adler Planetarium braces in a stiff wind and blowing snow off Lake Michigan, Monday, Nov. 11, 2019, in Chicago. Charles Rex Arbogast/AP Photo

We Energies and WPS customers will see higher heating bills amid rising demand and tight supplies
By Danielle Kaeding
Share:

Two of the state’s largest utilities are warning of higher heating bills this winter as natural gas prices have more than doubled since earlier this year. Natural gas has been relatively cheap for years, but prices have surged due to lower supplies and rising demand worldwide.

The price to buy natural gas has spiked from $2.62 per million British thermal unit earlier this year to between $5 and $6 since late September, according to the Energy Information Administration.

In the agency's winter fuels outlook, the EIA expects nearly half the nation's households that use natural gas will spend between 22 and 50 percent more on average, depending on whether the winter is colder or warmer than normal. Homes that use propane for heating could see costs rise between 29 and 94 percent depending on the severity of winter weather.

The state’s largest electric and natural gas utility, We Energies, warns the cost to heat homes could go up by $25 per month for residential customers based on a typical winter. Wisconsin Public Service customers could pay $40 more per month.

Several factors have lead to the increase, says Brendan Conway, spokesperson for the utilities and WEC Energy Group.

"There was some shutdowns due to COVID. There was some impacts from the hurricane this summer that impacted refineries, and then there's just that worldwide increase," Conway said. "As other economies start to come back, they have higher needs. All those things came together to create this price increase."

This summer, demand for power to keep air conditioners running also drove natural gas prices higher, meaning less was put in storage for winter months. The increase in natural gas consumption followed larger-than-average withdrawals this past winter due to extreme cold, which caused prices to spike and claimed hundreds of lives in Texas.

Tom Content, executive director of the Citizens Utility Board, said the surge in prices comes at a tough time for people who have been struggling to make ends meet during the COVID-19 pandemic. He added that many utility customers across the state are still seeing surcharges on their bill related to the February spike in gas prices.

"Those surcharges should be easing off as the winter season starts, but natural gas is pinching us in a number of ways," Content said.

He said customers could also see a bump on the electric side of their utility bills this winter due to the price hike. Utilities and consumer advocates are urging people to improve efficiency through updating insulation or heating equipment around the house to use less fuel this winter. They also encourage those who need it to seek energy assistance.

Democratic Gov. Tony Evers declared a state of emergency last year and in 2019, and former Republican Gov. Scott Walker declared a propane emergency in 2014 due to a shortage of supplies stemming from harsh winters.

Environmental groups have been pushing the Biden administration to make good on its climate commitments.

"So especially in situations like this, where there are really good alternatives like storage, weatherization, demand response, it just makes so much sense to pursue those," said Jadine Sonoda, campaign coordinator with the Sierra Club Wisconsin Chapter.

The utilities take steps to mitigate price hikes through buying natural gas in the summer when it’s generally cheaper. Conway noted utilities aren’t making a profit on the natural gas it provides, which is a pass-through expense. We Energies and WPS aren’t predicting any supply shortages this winter.

We Energies is currently proposing a $370 million project to build two liquefied natural gas plants in southeastern Wisconsin that would store natural gas for the coldest days when supplies shrink and prices spike. If approved by the Public Service Commission, the two facilities would store 12 million gallons of natural gas that each can hold about 10 days worth of supply.

"It's expected to save customers significant amount of money versus just, you know, buying it on the open market and paying those premium prices," Conway said.

We Energies anticipates the project could save customers $200 million over time. The Sierra Club has denounced the plan as an irresponsible, expensive move that foresees the use of fossil fuels for years to come. The group argues the utility should pursue energy efficiency and offer rates that reward large customers for reducing energy use during cold days to reduce carbon pollution and lower the energy burden in the region.

Natural gas is the largest source of energy consumed in Wisconsin, accounting for 35 percent of power generation among utilities. That share is four times larger than a decade ago, according to the Energy Information Administration.