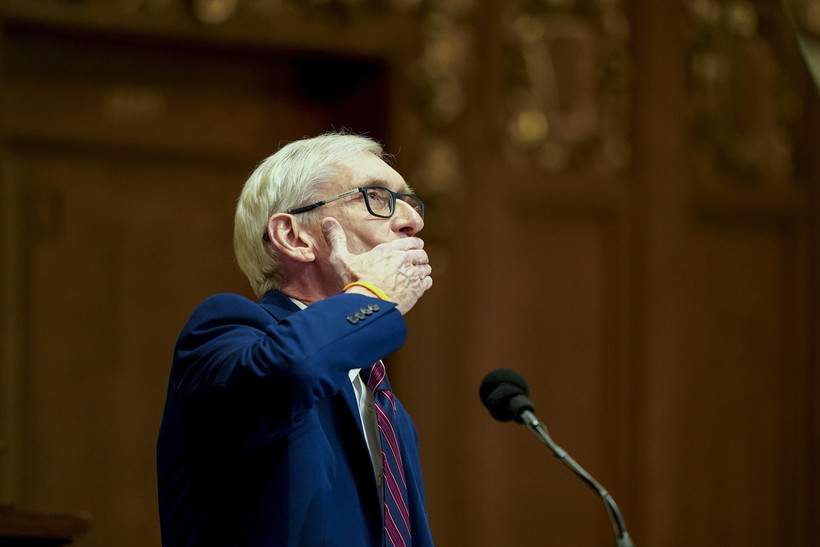 Wisconsin Gov. Tony Evers acknowledges his almost 50 years of his marriage to his wife, Kathy, in a joint session of the Legislature in the Assembly chambers during the governor's State of the State speech at the state Capitol Tuesday, Feb. 15, 2022, in Madison, Wis. Andy Manis/AP Photo

Gov. Tony Evers announced his intention Tuesday evening to call a special session of the state Legislature regarding his plans for a projected multi-billion dollar surplus in his last State of the State address of the current term.

The move comes weeks after Evers announced his plans for tax rebates and funding for public schools in response to a Legislative Fiscal Bureau report that indicated the state's budget fund was set to end June 2023 with a balance of more than $3.8 billion.

According to Evers' speech, his plans would include a $150 tax refund for every Wisconsin resident, along with $130 million for child and caregiver tax credits and $750 million for public education in the state.

"Let’s help address rising costs, let’s help make sure folks can afford to join our workforce, and let’s do what’s best for our kids," Evers said. "This is the people’s money. Let’s get it back to them."

"During times of crisis, we need strong leaders to act decisively, leaders who cast a bold vision, and most importantly, deliver on that vision to the benefit of everyone," LeMahieu said. "That is where Gov. Evers has failed Wisconsin, time and again."

It's the third year in a row Evers announced plans for a special session during the State of the State address. In 2020, the governor asked lawmakers to address the state's dairy crisis, and in 2021, he told legislators to offer solutions for the state's unemployment insurance system after it faced record levels of claims in the early months of the COVID-19 pandemic. Those and other calls for special sessions during his time in office have been met with limited success.

LeMahieu took credit on the Republican-controlled Legislature's behalf for the budget surplus.

"The Legislature has shielded our state from many of the damaging effects of both the current national climate and past state fiscal mismanagement," LeMahieu said. 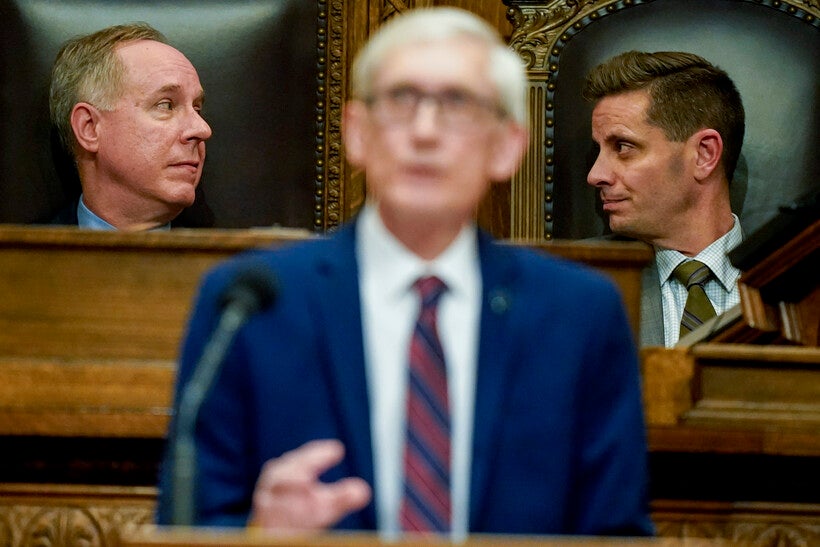 Assembly Speaker Robin Vos, left, R-Rochester, and Senate President Chris Kapenga, right, R-Delafield, look at one another while listening to Wisconsin Gov. Tony Evers address a joint session of the Legislature in the Assembly chambers during the governor's State of the State speech at the state Capitol Tuesday, Feb. 15, 2022, in Madison, Wis. Andy Manis/AP Photo

While Evers would need Republicans to approve his plan for the state surplus funding, the governor announced several projects Tuesday that would be paid for with federal pandemic relief funding. Evers has sole discretion over that funding, meaning lawmakers can't block those projects.

In addition to the education funding in his surplus proposal, Evers also announced plans to invest tens of millions of dollars to support mental health in the state's schools and universities.

The investments include a $15 million "Get Kids Ahead" initiative that Evers said would allow schools to provide mental health care and family assistance programs in the state's public schools.

"With this investment, kids in every corner of our state will have increased access to mental health support through their schools, on top of investments we’ve made in our budgets," Evers said.

Evers said $5 million in funding for the University of Wisconsin System would allow it to provide more telehealth counseling and mental health support on its campuses. He also announced a $25 million investment in the System, which he said would help keep a tuition freeze in place.

"With these additional funds, the UW System and Board of Regents can ensure that tuition prices for our in-state students will not go up for the next two years, giving our students and families one less thing to worry about," Evers said.

"We appreciate Gov. Evers’ commitment to public higher education and his recognition of the vital role the University of Wisconsin System plays in improving lives and communities across our state," the statement reads.

Another $30 million will go toward support of emergency medical providers and services, according to Evers, with $20 million of that funding going to rural areas. A Wisconsin Policy Forum report in October found increased calls and staff recruiting and retaining struggles have made it harder for providers to address the needs of the populations they serve.