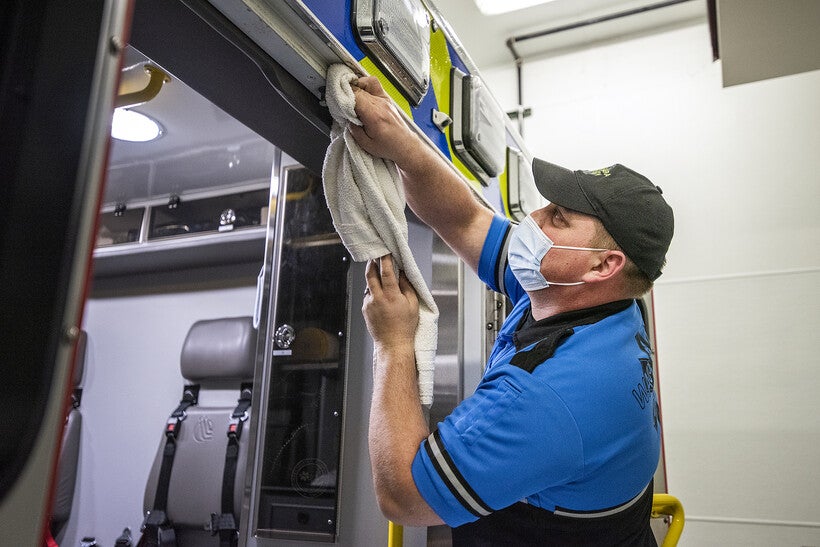 A report from the Wisconsin Policy Forum details the resource and staffing challenges that impact quality of emergency services, particularly in rural areas
By Diane Bezucha
Share:

You’re raking leaves on a fall afternoon and suddenly your heart seizes. You clutch your chest in panic and realize you might be having a heart attack. A neighbor notices and calls 911. Within four minutes, there is an ambulance on the scene and paramedics continue to provide care enroute to the hospital.

In more rural areas, that response time might have been 30 minutes or more, as a volunteer emergency medical responder had to be called away from their full-time job. The ride to the nearest hospital is another 30 minutes, but the roads are clear and you narrowly make it.

But what if you dialed 911 and nobody came?

A new report from the Wisconsin Policy Forum found that fire and emergency medical services, or EMS, providers across the state are struggling to meet service needs because of increased call volumes from an aging population and difficulties in recruiting and retaining staff.

"The combination of the staffing challenges and the growing call volumes means that departments are really under duress in terms of how they're going to continue to provide an appropriate level of response going forward," said Wisconsin Policy Forum President Rob Henken.

For decades, Wisconsin’s rural communities have relied on volunteer-run emergency services, but rising call volumes and shrinking volunteer pools are challenging the sustainability of this model. Without adequate resources, providers may be forced to sacrifice quality of care or, in some communities, not provide emergency services at all.

This creates a significant threat to public safety, especially during a pandemic.

"Unless they are appropriately addressed, fire and EMS financial and staffing challenges may soon have a real impact on public safety," the report said. "The ability of many communities to provide an appropriate level of fire and emergency medical services is in jeopardy and may soon necessitate an emergency response of its own."

Across the board, fire and EMS providers said the No. 1 challenge has been staffing. There are simply not enough people to respond to every call in a timely manner, particularly for EMS.

"It’s at a dire pace right now. Many people can’t take off at all, at any time. They’re working multiple jobs. They’re taking 36- and 48-hour shifts," said Alan DeYoung, executive director of the Wisconsin EMS Association.

The problem is most acute in rural communities and towns of less than 15,000 people.

In urban areas, fire and EMS providers typically hire full-time staff who are "career professionals," compensated with salaries and benefits. But that's an expensive model that doesn't always work for smaller towns where tax revenues and emergency calls are generally much lower.

Instead, these towns and villages rely on trained volunteers.

According to the report, 82 percent of the state’s fire and EMS responders are volunteers, who often work other full-time jobs.

Ron Hampton is the chief of the Cassville Volunteer Fire Department in Grant County. He's also an emergency medical responder, or EMR, who assists rescue squads in two neighboring towns.

And those are just his volunteer gigs. Hampton is also a farmer, part-time school bus driver and father of three. But when his pager goes off, he drops whatever he is doing to help someone in need.

"I've walked out of birthday parties, wedding parties, all of that, just because that's what we do," said Hampton.

But Henken said the volunteer staffing model is proving difficult to sustain.

"It is getting more and more difficult to maintain robust rosters of individuals who are able to have the flexibility to respond in that fashion," he said.

Part of the problem is shrinking populations in rural communities.

Cassville has lost two power plants, so Hampton said the people who do still live there often work in other towns, making their response time to an emergency that much longer.

The existing volunteers are starting to retire, "and nobody’s been replacing them," said DeYoung, of the Wisconsin EMS Association.

Many providers say younger generations aren't interested in volunteering, especially for something as time-intensive as emergency services.

Most EMS calls come in during the day, which is a challenging time to respond if someone has a full-time job and a family.

And volunteers are required to have the same basic training and certifications as career professionals. For an EMT, this is about 200 hours of training and studying for a national exam.

"It's very difficult on that new recruit to say, ‘Congratulations, you're going to give up six hours, two nights a week. And you’ve got to pass a national test in order to become an EMT.’ That scares a lot of people away," said Hampton.

As a result, both paid and volunteer-based providers are seeing a dip in the number of people getting trained in emergency services.

So why not just pay people?

According to the report, fire and EMS are among the most costly services that local governments provide, but they get very little federal or state support. Most of the money comes from local property taxes, as well as insurance companies, Medicare and Medicaid.

Hampton said he crunched the numbers one time to see what it would cost to create a full-time department of emergency responders for Cassville and two nearby towns. For 10 to 12 salaried staff, the cost came out to about $1 million, which would eat the majority of the $1.5 million in annual tax revenue the three towns bring in collectively.

Even if local officials could be persuaded to raise property taxes to fund these services, local municipalities are restricted by state-imposed property tax limits that require a referendum to increase taxes. Sales tax is off limits, too. Wisconsin counties can levy some sales tax, but cities and towns cannot.

And while Wisconsin has a shared revenue program that provides some aid to local municipalities, there are strict expenditure restraint limits that dictate how much they can spend.

This leaves many rural communities stuck — they can’t get enough volunteers, but they can’t pay full-time staff, either.

In search of solutions

"There really isn’t one solution to fixing this. It’s a multi-faceted problem," said DeYoung. "But the first step is funding it, so all of the positions are paid positions because you can’t always rely on volunteers when they’re trying to work a full-time job."

One solution raised in the report is consolidation of services — neighboring towns pooling their resources and sharing in administration and emergency response.

Because of how quickly fires can cause widespread damage, many fire departments already rely on mutual aid agreements with nearby towns.

The study found that these consolidated departments could provide an effective model for struggling rural communities.

"You're going to find with a consolidated department, a lot of times, staffing is easier to do, response times are going to be quicker. And then you don't need as much funding covering some of those areas. So it's even better on taxpayer money," said DeYoung.

Another recommendation from the report was to increase direct state aid, particularly to help potential recruits pay for training and certifications.

"If there's some more initiative from the state level, just to get people into it, that would take a little bit of the burden off of these departments," DeYoung said.

He added that partnership initiatives with the state’s technical colleges could also help bring more students into fire and rescue programs.

Daniel Litton is fire chief of the Green Bay Metro Fire Department. As the third-largest career fire department in the state, Litton’s has not faced the same challenges with staffing as other departments. But he knows smaller towns are struggling, so the department provides services to nearby Allouez and Bellevue.

"We are a big fan and a big proponent of the consolidation efforts," said Litton.

But what’s lacking, he said, is direct representation for these consolidated towns. They just sign an intergovernmental contract, pay their money and get what they get.

While the exact path forward may not be completely clear, advocates know one thing for sure.

"This is public safety. This is your backbone of society — 911, you need help," said DeYoung. "As staffing issues go on, we're going to see even higher amounts of burnout. And people will just get out of it completely. And then you just won't have EMS."