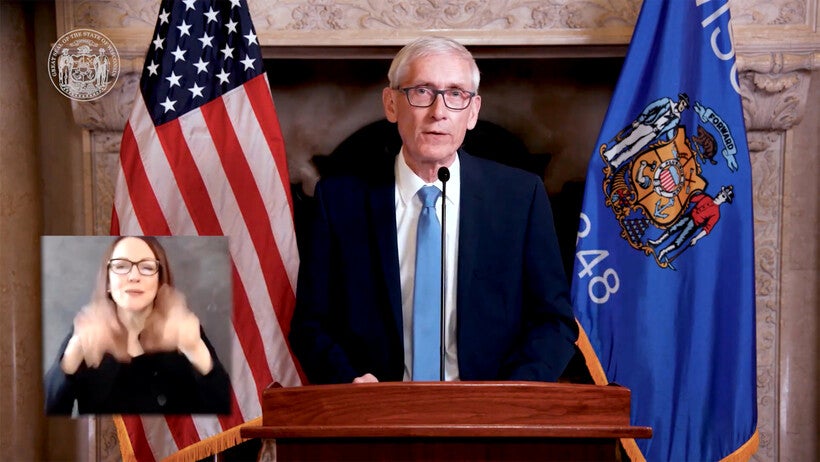 Gov. Tony Evers delivers his 2021 State of the State Address on Jan 12. It's the first time in the state the address has been given virtually. Screenshot from YouTube

Gov. Tony Evers will call a special session of the Legislature to overhaul the state’s dated and struggling unemployment insurance system, the governor said Tuesday evening during his annual State of the State address.

Since the outset of the pandemic, the state Department of Workforce Development (DWD) has struggled to keep pace with an unprecedented number of unemployment insurance claims, with some waiting months to receive checks.

According to the Workforce Department, the backlog was cleared as of Dec. 30, more than three months after the former head of the department resigned at Evers’ request.

During his address, which was delivered virtually, Evers laid blame on the state’s decades-old system for processing claims. Officials in his administration have previously criticized the technology, calling it "antiquated" and "inflexible." A 2014 report from DWD also called out flaws in the system.

"We know that replacing this system will take years — that’s why it should’ve been done sooner, but it’s also why we now have not another moment to waste," Evers said. "No politics, no posturing, send me the bill and let’s just get it done."

Wisconsin Republicans have consistently argued the Evers administration didn’t do enough to eliminate the backlog more quickly. Assembly Republicans proposed a loan program in July for workers awaiting benefits and have urged the governor to put more pressure on DWD to expand hours and staffing.

During the Republican response to the address, Assembly Speaker Robin Vos, R-Rochester, reiterated the GOP criticism.

"These failures weren’t brought on by ancient systems, they were brought on by a lack of leadership," Vos said. "The Evers administration owes these families answers and in some cases, an apology."

But Democrats have blamed Republicans for the delays. They argue GOP lawmakers who have controlled the state Legislature since 2011 haven't done enough to modernize the technology used at the office.

"Republicans and Democrats alike are to blame," Evers said in his speech. "The fact of the matter is that previous administrations and more than a decades’ worth of legislators have known this system was outdated and couldn’t handle an economic crisis like the one this pandemic presented, and they never took the time to fix it."

Earlier this week, the department blamed the outdated system for an uncertain timeline surrounding new unemployment benefits created under the second round of federal coronavirus relief.

The governor has previously called special sessions on policing, gun laws, elections and the state's dairy industry with little success. Lawmakers have gaveled in and out of several of those sessions without taking action.

Evers also used the address to announce a plan to dramatically increase funding for broadband infrastructure in Wisconsin, saying the COVID-19 pandemic has thrown the need for high-speed internet across the state in sharp relief.

Evers said his next two-year state budget proposal, which will be unveiled in February, will include roughly $200 million for expanding broadband access. The last biennial budget included $54 million for broadband.

The funding would have to be approved by the Republican-controlled Legislature.

The governor also pledged he would require GOP state lawmakers to hold public meetings as they draw the state's next set of legislative district maps, a process that takes place every 10 years and is set to happen this session. Evers said he would also prevent the Legislature from destroying records from the map-drawing process and require lawmakers to take up maps drawn by a commission he created.

However, the governor would need GOP support to enact those requirements. 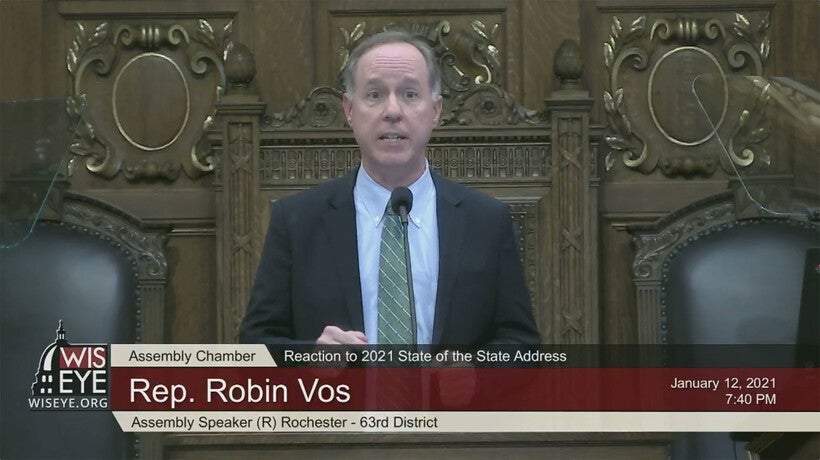 Vos also used the GOP response to the governor's address to criticize Wisconsin’s COVID-19 vaccine rollout, saying it is happening too slowly and prioritizing the wrong people.

"There is no sense of urgency with the Evers administration," Vos said. "They’ve had months to develop a plan and a subcommittee is still deciding who should get the vaccine next."

Vos called Wisconsin’s rollout "an embarrassment compared to other states" and criticized prioritizing vaccinations for inmates.

According to the state Department of Health Services, 163,371 people have been vaccinated so far in Wisconsin. The state has been allocated about 600,000 doses and shipped roughly 373,000.

Vos said the Assembly will hold a public hearing on Thursday to examine the state’s vaccine distribution process.

The speaker also weighed in on a COVID-19 response bill that passed the state Senate on Tuesday.

"It seems the only way to find common ground is to cave into the governor’s demands," he said, referencing the Senate's scaled-back version of the Assembly's initial response plan. "We will continue to work to reach a consensus as equals, but never compromise our conservative ideals."