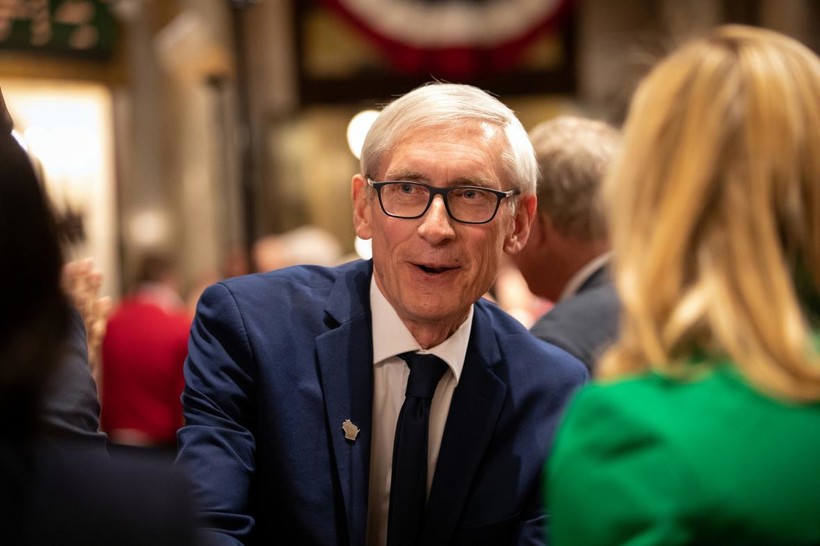 GOP lawmakers passed tax cuts for Walker in 2014 and 2018, but say Evers' plan is a 'reelection gimmick'
By Shawn Johnson
Share:

Now, with Democratic Gov. Tony Evers calling for a tax cut ahead of his own reelection, it's been an about-face from Republicans, with GOP leaders declaring Evers' proposed tax rebate dead on arrival.

It likely won't stop Evers from promoting his plan at Tuesday's State of the State address, the same annual forum where Walker promoted his tax cut proposals in 2014 and 2018.

But political scientist Mordecai Lee, a professor-emeritus at the University of Wisconsin-Milwaukee, says it's an example of the "disorienting" nature of today's politics, where positions change year-to-year based almost entirely on political circumstances.

While it might be hard to compare the circumstances of this year with pre-pandemic politics, there are glaring similarities in the events that led to Walker's tax cuts and those that led to Evers.

Less than a week later, Walker used his 2014 State of the State Address to unveil a roughly $500 million income and property tax cut.

"What do you do with a surplus?" Walker said in his speech. "Give it back to the people who earned it. It's your money."

While GOP lawmakers debated the size and shape of the 2014 tax cut, they passed it less than two months later, and Walker signed it into law.

In January 2018, the Legislature's budget office released another set of estimates predicting tax revenue would grow, only this time, the projected windfall was more modest at about $140 million.

A week later, Walker used his State of the State speech to call for spending most of the revenue on a new child tax credit, to which lawmakers added a one-time sales tax holiday.

"As I promised, when we have a surplus, we will give it back to you," Walker said.

While Republicans haggled over the details, by April Walker had signed the tax package, promoting it heavily during campaign stops that year ahead of his eventual loss to Evers.

Like Walker, Evers proposed his tax cut after the Legislature's budget office projected tax revenues would grow, although the projected windfall this time was far greater than anything experienced under Walker.

This time around, the Legislative Fiscal Bureau projected revenue would grow by $2.9 billion more than just a year earlier, leaving the state's general fund with a balance of roughly $3.8 billion.

Two days later, Evers called for spending $1.7 billion of the surplus on a combination of tax relief and education spending, with the centerpiece of his plan a $150 per person tax rebate for every Wisconsin resident. According to the governor's office, the rebate would return about $816 million to taxpayers.

"I've heard Republicans talk about this in the past," Evers said during a Capitol news conference. "This is the people's money."

But unlike Walker's proposed election year tax cuts, Evers' proposal went nowhere fast. It was alive, in theory, for about two hours before Republicans rejected it.

Vos issued a statement saying Republicans wouldn’t use the current surplus to cut taxes because it’s so big compared to the surplus they dealt with in 2018 under Walker.

"When Republicans proposed a one-time tax credit, we realized it wouldn’t provide the long-term impact the people of Wisconsin needed," Vos said. "With a surplus this size, we are committed to permanent, generational tax reform."

To Lee, who served as a Democrat in the Wisconsin Senate decades ago, today’s situational politics are disorienting and depressing.

"There's almost an amnesia in the political culture," Lee said. "Nothing is anchored in substance. It's all based on the timing and what's to the advantage of my team."

The swift and unequivocal rejection of Evers’ plan came less than a year after Evers signed a state budget passed by Republicans that cut state income taxes by roughly $2 billion. Part of the reason Evers and Republicans agreed to that plan is that, practically speaking, they had to pass a two-year state budget. But the tax cut Evers proposed this year is optional, just like the ones Republicans sent to Walker’s desk in 2014 and 2018.