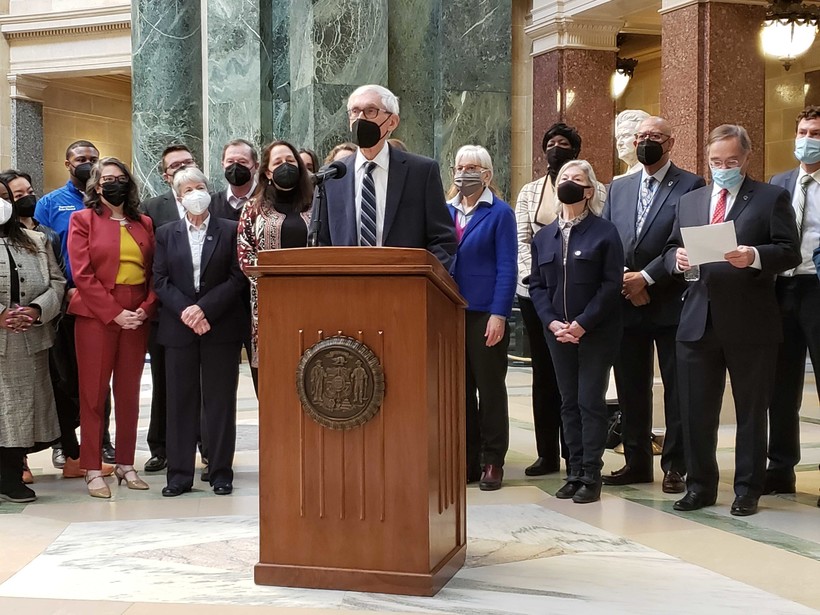 Gov. Tony Evers unveils a proposal for a new $150 per person tax rebate at the Wisconsin Capitol on Jan. 27, 2022. Shawn Johnson/WPR

The plan is unlikely to pass the Legislature where GOP leaders called it an election year gimmick
By Shawn Johnson
Share:

Days after state revenue estimates came in billions of dollars higher than expected, Gov. Tony Evers called on GOP lawmakers to pass a new tax rebate that would pay every Wisconsin resident $150.

But just hours after Evers unveiled the plan, GOP leaders flatly rejected it, setting up a standoff ahead of Evers' reelection campaign.

The governor's plan would also set aside about $103 million for an income tax credit for caregivers, $139 million for higher education and $610 million for K-12 education.

While the plan faces an uphill climb politically, it's financially possible thanks to new revenue projections released this week that were $2.9 billion larger than predicted just last year. Should those estimates hold, it would leave Wisconsin's general fund with a surplus of $3.8 billion by the end of the two-year state budget, on top of another $1.7 billion in Wisconsin's rainy day fund.

Republicans said earlier this week that they wanted to wait to spend that surplus until the next budget is introduced in 2023. Evers said Wisconsin residents couldn't wait that long for help given the strains many of them are feeling with inflation and the pandemic.

"That surplus won't do us any good just sitting here in Madison until the summer of 2023," Evers said at a state Capitol news conference Thursday. "We have the resources to make sure that every family and every community is doing just as well as our state's economy."

Just four years ago, GOP lawmakers passed and former Gov. Scott Walker signed a tax credit that paid parents $100 for every child. The same plan included a sales tax holiday for school supplies among other goods.

At the time, Democrats described the tax credit as an "election year bribe" for Walker. Asked about those criticisms, Evers said it was a different time.

"We weren't in a pandemic back then," Evers said. "And we didn't have people that were struggling mightily at home, especially with some inflationary costs."

The size of Wisconsin's budget balance in 2018, and the size of its rainy day fund, were also smaller compared to the latest projections.

Evers also dismissed the idea that the Legislature wouldn't pass his tax credit, calling the plan a Republican issue.

But in multiple written statements following the release of the governor's plan, top GOP lawmakers rejected it.

"With a surplus this size, we are committed to permanent, generational tax reform, as also seen in every Republican budget over the last decade," said Assembly Speaker Robin Vos, R-Rochester.

LeMahieu, Vos, Marklein and Born all voted for Walker's child tax credit in 2018.

"Any proposal that does not include substantial tax reform, putting more officers on the streets, and a real plan to fix our education system should be a non-starter for Republicans," Kleefisch said. "No more band aids."

The Democratic Party issued its own statement Thursday, accusing Republicans of trying to "hold taxpayers hostage" by opposing the governor.