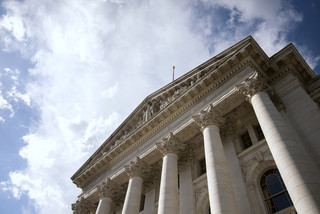 The state of Wisconsin's financial picture got even brighter Tuesday when the Legislature's nonpartisan budget office projected state tax revenue would grow by billions more than expected.

The nonpartisan Legislative Fiscal Bureau told lawmakers that the two-year budget's general fund was now projected to end with a balance of more than $3.8 billion. That's nearly $2.9 billion more than the office estimated last year.

Fiscal Bureau Director Bob Lang told lawmakers $2.5 billion of that increase was due to higher-than-expected revenue from Wisconsin's income, sales and corporate taxes.

The $3.8 billion balance is projected for the final day of the state's current two-year budget on Jun. 30, 2023. Notably, it does not include an additional $1.7 billion in Wisconsin's rainy-day fund.

Wisconsin's budget was already projected to be in relatively strong shape even before the latest budget numbers, all but ensuring that the surplus would fuel ideas for increased spending or tax cuts during the upcoming campaign for governor.

In a written statement, Gov. Tony Evers celebrated the latest news, saying he was "proud of our efforts to make smart decisions with taxpayer dollars." While he did not offer specifics, Evers also said he wanted to spend at least some of the funds this year.

"At the end of the day, I know folks and families are facing rising costs at the checkout line and businesses are facing challenges getting resources and supplies," Evers said. "Wisconsinites need help making ends meet and can’t wait until the next biennial budget — they need relief now."

But Senate Majority Leader Devin LeMahieu, R-Oostburg, issued his own statement declaring that Republicans would leave the projected surplus untouched this year.

"We will not be foolish with these tax dollars by spending them into the future," LeMahieu said. "Rather, we will focus on further tax relief in the next budget."

In previous years, when Republicans controlled the Legislature and the governor's office, they used budget projections to call for and quickly pass tax cuts. Sen. Chris Larson, D-Milwaukee, suggested the politics of Evers' reelection campaign was behind the GOP decision to sit on the money.

"Republicans are signaling they won't use this surplus to cut taxes, because they're worried it might help Governor Evers in an election year," Larson said in a tweet.

Evers signed a Republican-authored $2 billion tax cut as part of the current budget.

Outside groups were quick to offer their own ideas for the funds. The group Main Street Wisconsin, an ally of the governor's, said the money should be used to help small businesses and families with child care expenses. The group also called for using the funds to expand BadgerCare.

"The time to use a 'rainy day fund' is when it is raining," read a statement from Main Street Wisconsin. "It is pouring and these steps could help Wisconsin bounce back and set a firmer footing for the future."

The conservative Institute for Reforming Government put out its own statement moments later calling on using the funds to eliminate Wisconsin's income tax entirely.

"The state's massive surplus is further reasoning to eliminate the state's income tax," said group president CJ Szafir. "This would be a massive tax cut for the middle class and small businesses and make Wisconsin the best in the Midwest for job growth and to raise a family."

If GOP lawmakers and Evers don't agree on any ideas for spending the budget balance now, whoever wins the 2022 governor's race will likely steer the decision.

"Wisconsinites created this surplus," Kleefisch said. "Time to give this money back to the people who overpaid government."

Kleefisch faces a likely GOP primary for governor against former U.S. Senate candidate Kevin Nicholson. The winner will take on Evers in November.