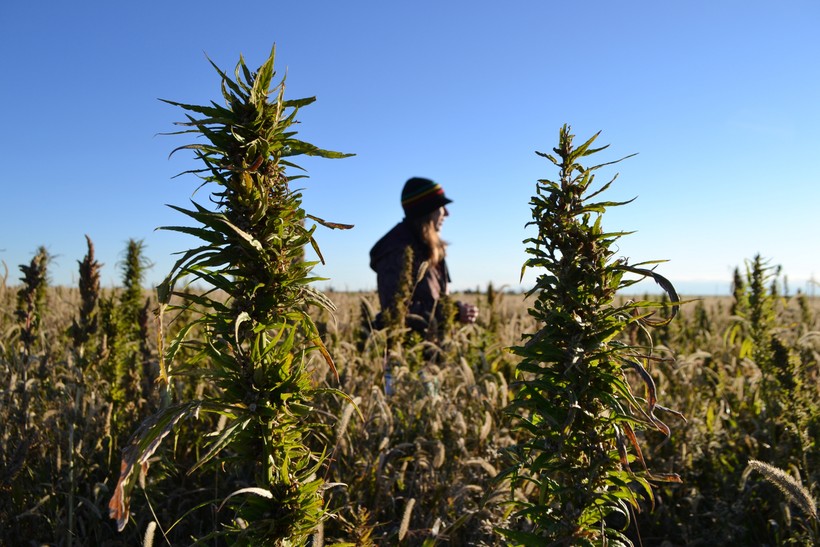 A volunteer walks through a hemp field at a farm in Springfield, Colo. on Oct. 5, 2013, during the first known harvest of industrial hemp in the U.S. since the 1950s. P. Solomon Banda/AP Photo

Hemp growers in Wisconsin have 10 new options to combat pests after a new round of pesticide approvals from the U.S. Environmental Protection Agency.

Nine out of the 10 are bio-pesticides, or pesticides derived from natural materials, for use in hemp farming.

Hemp is a variety of cannabis plant that is used in products ranging from rope to shampoo to CBD, which is sometimes used to treat epilepsy or chronic pain.

Shelby Ellison, a hemp researcher at the University of Wisconsin-Madison, said the new approvals will add another helpful tool to farmers’ toolboxes.

"The more things you can pull from for treating different types of pests, the better chance you have at knocking down the population and having a successful crop," she said.

One bug causing problems in the young industry is the Eurasian hemp borer, Ellison said. It lays its larvae on hemp plants, which then burrow into the stem, killing part of the plant and leaving it vulnerable to fungi and other insects. Some of the pesticides the EPA approved are derived from bacillus species, a type of bacteria that has been effective against Eurasian hemp borers, she said.

Bryan Parr, an agronomist with Legacy Hemp, said pesticides could be an especially big help to farmers who grow hemp for CBD.

Even with those considerations, Parr and Ellison agreed there could be drawbacks to using the newly approved pesticides.

Farmers who grow hemp for human consumption should check with their processors before using them, Parr said.

"Everything that that plant was ever exposed to during the growing season becomes highly concentrated, and for most places that are processing or purchasing CBD hemp, they require a zero-tolerance for pesticide residues," he said.

And farmers looking to keep their crops organic need to be careful even with bio-pesticides, because they might be derived from genetically modified organisms, Ellison said.

"The organism is naturally deriving a product, but it was created through a genomic modification, which then is not allowable in most organic certifying agencies," she said.

Wisconsin was the country’s top hemp-producing state from 1920 to the 1950s. Hemp production was outlawed nationwide in 1970, when it got lumped into the same illegal-drug category as marijuana, according to the Wisconsin Legislative Reference Bureau. It was re-legalized in Wisconsin in 2017.