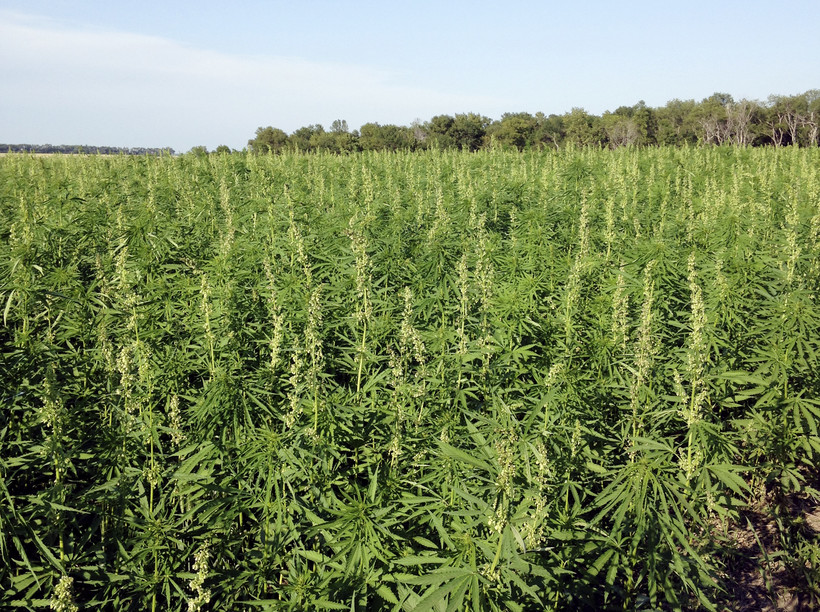 This July 2016 photo provided by the North Dakota Department of Agriculture shows industrial hemp growing in a field in North Dakota's Benson County.

Democrats Voice Concern About Some Elements Of Proposal
By Laurel White
Share:

A state Senate committee has approved a bill that would bring industrial hemp farming back to Wisconsin.

Farming hemp hasn't been legal in the state for decades, though it was once popular. The practice was outlawed due to the plant containing a small amount of THC, the chemical that gives marijuana users a high.

Under the Republican-backed proposal, Wisconsin farmers could apply for a state permit to grow the crop. The federal government now allows such permits, as long as farmers participate in research programs.

Supporters say Wisconsin land is good for hemp farming, and argue the crop would be very profitable.

Hemp is used to make rope and a variety of food products, including granola bars.

The bill passed a Senate committee unanimously on Wednesday, though some Democrats voiced concern with a few parts of the bill.

Under the proposal, tribes would be barred from partnering with tribal colleges or universities to grow and study hemp.

"To me it feels discriminatory and disrespectful to the benefits and the accreditation of these private colleges and universities," said Sen. Mark Miller, D-Monona.

Democrats also pushed for removing a provision requiring farmers to destroy crops that have a certain percentage of THC and a requirement that farmers pass a background check before they’re awarded a permit to grow the crop.

"It doesn’t make any sense to totally destroy the crop and all the farmer’s investment," said Sen. Kathleen Vinehout, D-Alma. "To me, this strikes up the prohibition-minded thinking that some folks in the history of our state have had for hemp."

Another Democratic amendment would have removed the requirement that tribal members can’t grow hemp without a license. Democrats argued tribes should be able to create their own regulations for hemp farming.

Sen. Patrick Testin, R-Stevens Point, said Wednesday that he will work with Democrats to address their concerns. He said he expects to introduce at least one amendment to the bill if it comes before the full Senate.

"We are going to be addressing some of the issues that were brought up," Testin said.

The bill has yet to be heard in the Assembly.