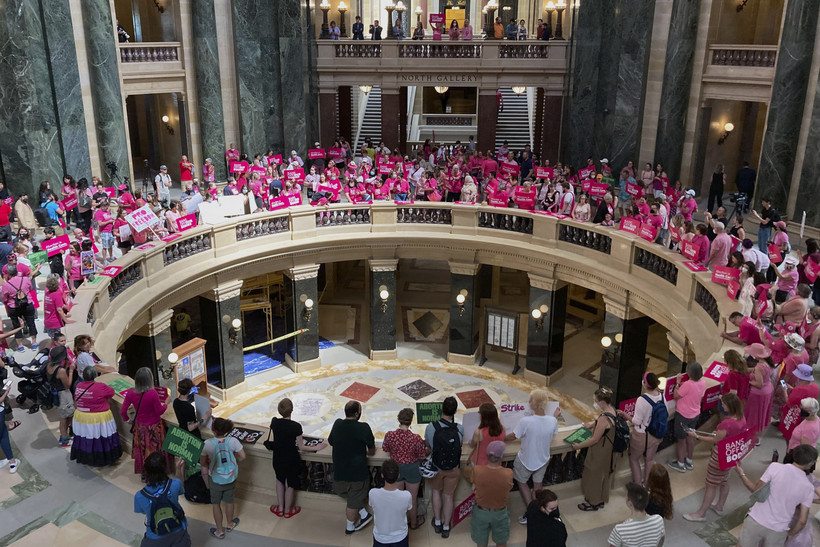 Gov. Tony Evers said he would offer clemency to doctors who are prosecuted for performing abortions in Wisconsin. The statement came during an abortion rights rally at the Wisconsin Democratic Party convention Saturday in which the first-term governor told attendees to hold the line this fall against Republicans "running a scorched earth campaign to divide our state."

Evers offered the keynote speech during the first in-person state Democratic convention since the start of the COVID-19 pandemic. He immediately pivoted to Friday's U.S. Supreme Court ruling striking down the landmark abortion rights case Roe v. Wade. Evers called it a step backward for America, allowing politicians to meddle in personal decisions about reproductive health.

"These decisions should be made between a woman and her doctor, family, and faith," Evers said during his speech. "Now, these decisions are being dictated by partisan politicians."

The convention was paused earlier Saturday for an impromptu abortion rights rally in which Evers became emotional as he described the impact of the high court's ruling on his seven granddaughters.

"Yesterday they were made second-class citizens," said Evers. "That's bulls---!"

A tweet from the rally posted by state Rep. Lee Snodgrass, D-Appleton, said Evers went on to tell the crowd at the rally that he would grant clemency to anyone charged and convicted of crimes for performing an abortion in Wisconsin.

With Roe v. Wade overturned, a 173-year-old state abortion ban, making it illegal to perform an abortion unless deemed medically necessary to save a patient's life, is once again in effect. Despite questions about whether the law is enforceable, clinics stopped providing abortion procedures Friday.

Wisconsin Attorney General Josh Kaul, who is also up for reelection in November, told attendees at the convention the repeal of federal abortion protections will make women less safe moving forward and that he will not use state Department of Justice resources to investigate or prosecute anyone for violating the state ban.

During his speech Saturday evening at the convention, Evers said he doesn't think a law "written before the Civil War, or before women secured the right to vote" should dictate reproductive health decisions.

Democratic U.S. Sen. Tammy Baldwin called the abortion ruling "the elephant in the room" during her convention speech.

"Republicans in Congress and in our state Legislature have taken Wisconsin back to 1849," said Baldwin. "And it is Republicans who want to keep us all there, where women now have fewer rights than our mothers and our grandmothers."

Baldwin said if Democrats were waiting for a sign to get angry, get active and get involved in reelecting Evers, Kaul, U.S. Reps. Mark Pocan and Gwen Moore and defeating Republican U.S. Sen. Ron Johnson in November: "This is your sign!"

During an interview with reporters prior to the start of the convention, Republican Party of Wisconsin Chairman Paul Farrow said Roe v. Wade being overturned changes the political landscape in Wisconsin.

"There is a standard that people have," said Farrow. "The Republicans know we're pro-life. The vast majority of people know that we stand for the sanctity of life from the beginning, and we'll continue to work on that."

Farrow said the abortion issue shouldn't have been decided at the federal level in the first place and it's possible the Republican-controlled state Legislature could address the state's abortion ban when the next legislative session starts in 2023.

After addressing abortion during his keynote speech, Evers then turned his attention to some of the Republican cadre of candidates running against him in his first reelection bid since narrowly defeating former Republican Gov. Scott Walker in 2018.

"My opponents are already running a scorched earth campaign to divide our state," said Evers. "We don’t have to imagine what they’ll do if they’re in office, because they’ve already told us."

"Rebecca Kleefisch has said she wants to 'hire mercenaries' to work for her campaign, and uses violent language threatening election officials," Evers continued. "The policies she supports are even more radical."

The governor also took a jab at Madison construction executive Tim Michels, who entered the Republican primary in April and was endorsed by former President Donald Trump in early June.

Michels was essentially tied with Kleefisch according to the latest Marquette University Law School poll of Wisconsin voters.

Evers nodded to criticism from some conservatives who have questioned the amount of time Michels has spent in New York City since losing a bid for U.S. Senate in 2004, "Meanwhile, it's pretty clear that Tim Michels hasn't spent much time in Wisconsin since he last ran for office," Evers said.

"He's sticking by the same radical positions he held then: he wants to get rid of marriage equality and take away a woman’s right to choose," Evers said. "But unlike 20 years ago, he’ll now tell Donald Trump whatever it takes to keep his endorsement."

Evers then leaned in on his laid back persona, stating he's "not the flashiest guy in the room" and is sometimes underestimated by political rivals.

"While Republicans want to divide us, I’m focused on delivering results that matter," he said.

"We’re also helping working families get ahead. People are keeping more of their paychecks to help with rising costs," Evers said. "We brought Republicans and Democrats together to cut income taxes by 15 percent for working families."

The tax cut was backed by Republican lawmakers and included in the 2021-2023 state budget signed by Evers in July 2021.

"But, I can’t do it alone," said Evers. "I’m counting on all of you in this room to stand with me. When we organize, bring people together, and talk about the future we want to build for our state — we win."