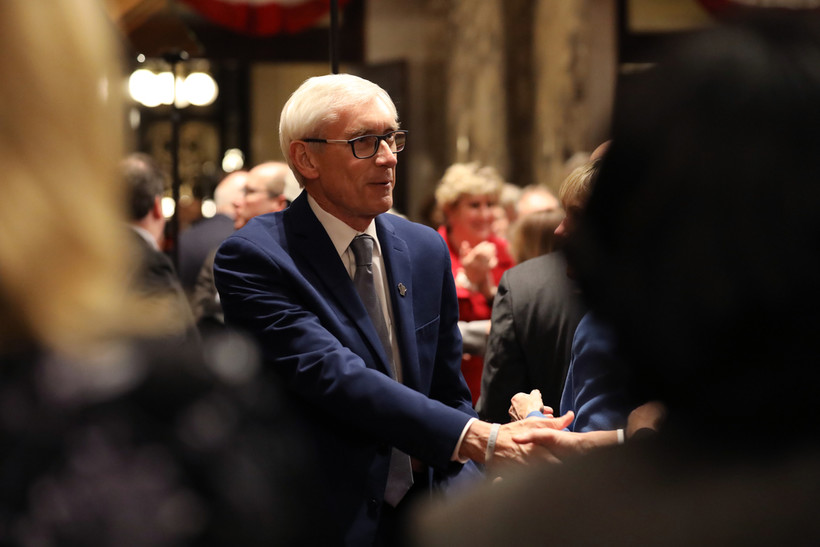 Wisconsin Governor Tony Evers greets members of the legislature before his second State of the State address on Wednesday, January 22, 2020, in the Wisconsin State Capitol in Madison, Wis. Coburn Dukehart/Wisconsin Watch

Gov. Tony Evers has signed the 2021-2023 state budget, which includes a more than $2 billion tax cut backed by Republicans.

The Democratic governor used his veto pen to make 50 changes to the budget, though most of the changes were minor. Evers has one of the most powerful veto authorities in the country, with the ability to delete words, numbers and punctuation from the spending plan.

Speaking at a Thursday morning press conference at an elementary school in Whitefish Bay, the governor framed his signing of the mostly Republican-backed budget as a bipartisan move.

"In many ways, this budget presents a false choice between the priorities the people of the state care about and deserve," Evers said. "But after eight long years of politicians making decisions for all the wrong reasons, I ran to be governor of this state and promised I would always put people before politics."

The governor said vetoing the entire budget was "not an option," because doing so would have compromised billions of dollars in federal coronavirus aid to the state. He also said a Wisconsin Supreme Court decision last year "made it more difficult to partial(ly) veto the budget, there’s no doubt about that."

The GOP-controlled Legislature approved the two-year spending plan last week on mostly party-line votes, with Republicans voting in favor and Democrats against. Several Democrats who voted for the budget expressed hope that Evers would use his veto power to make changes to state spending levels on things like education.

Overall, the budget approved by lawmakers spent billions less than Evers called for and omitted major proposals from the governor, including legalizing marijuana, expanding Medicaid and raising the minimum wage. It also included a $3.4 billion tax cut the governor didn't propose.

Evers said Thursday the budget was written in such a way that prevented him from using his veto pen to increase state school spending, as he did for the last budget. Republican leaders have said they intentionally kept this budget concise to limit the governor's editing power.

However, the governor used the budget-signing press conference to announce he will direct $100 million in additional federal pandemic stimulus money to schools. Schools are already set to receive $2.3 billion under the latest coronavirus aid packages.

"Other people playing politics hasn’t stopped me from doing what’s best for our kids before," Evers said. "Schools in districts across our state will be able to use these funds to support kids in the classroom, hire educators and staff, provide additional educational or mental health supports, buy art supplies, or computers, keep the lights on — whatever it takes to provide a great education."

Republican legislative leaders were quick to criticize the governor on Thursday for lauding the more than $2 billion tax cut included in the budget, arguing Evers shouldn't be able to claim any credit for the plan.

GOP lawmakers unveiled a $3.4 billion tax cut to be included in the budget last month. With his veto pen, Evers slightly scaled back the plan. However, it retains the biggest element of the GOP-backed cut: lowering income taxes for the largest tax bracket in Wisconsin from 6.27 percent to 5.3 percent. According to the Legislature's nonpartisan budget office, that change is expected to cost the state about $2.4 billion over two years. An individual or family that earns between $50,000 and $60,000 per year would save $172 on income taxes annually, the budget office said.

Evers framed the cut as keeping his 2018 campaign promise to cut taxes for middle-class families by 10 percent.

"Personally, I find it laughable and hypocritical that just six months ago Gov. Evers introduced his budget and proposed an over one billion dollar tax increase," said Rep. Mark Born, R-Beaver Dam, at a Thursday afternoon press conference. "He was given the opportunity to lead and propose tax cuts for the hard-working families of Wisconsin, and he failed."

According to the Legislature's nonpartisan budget office, Evers' proposal would have increased taxes by roughly $1 billion over the next two years. Those increases included limiting a tax credit for some manufacturers and increasing capital gains taxes on high-income individuals.

"This was not a bipartisan process of colleagues sharing ideas," Senate Majority Leader Devin LeMahieu, R-Oostburg, said in a prepared statement. "(Evers) got boxed into a corner and rather than fight for his unpopular budget and risk a political knockout, he and his team threw in the towel and signed our responsible budget."

The governor's 50 partial budget vetoes were mostly minor. The changes stand in contrast to the 78 vetoes Evers issued for the last budget, in which he was able to increase funding for schools by roughly $65 million.

Highlights of the governor's partial vetoes this time include: