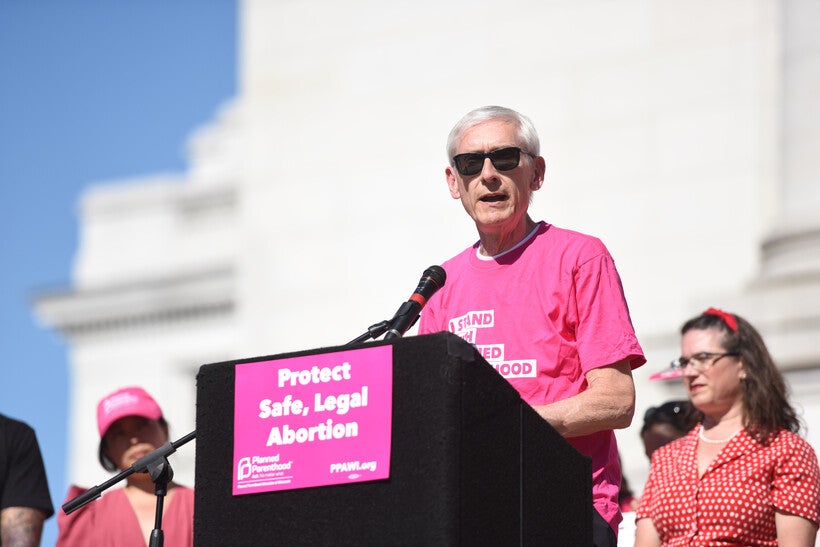 Gov. Tony Evers addresses a crowd of protesters who oppose the Supreme Court’s draft ruling on Roe vs. Wade on Saturday, May 14, 2022, at the Wisconsin state Capitol in Madison, Wis. Angela Major/WPR

Wisconsin Gov. Tony Evers asked lawmakers to overturn the state’s 173-year-old abortion ban as he called a special session of the state Legislature Wednesday. The announcement comes in the wake of a potential U.S. Supreme Court ruling that could overturn a decision that gives pregnant people a constitutional right to an abortion.

Speaking in Milwaukee, Evers said time was running out to protect reproductive health services in Wisconsin.

"There are so many people in each of our lives, our family members, our friends and our neighbors, who could see their ability to make their own reproductive health care decisions taken from them," Evers said.

Evers said his aim was to ensure abortions remain accessible, safe and legal in the state.

"I'll keep fighting every day to defend reproductive rights and access to abortion as long as I am governor," Evers said. "This isn't about politics. This is about the will of the people."

In a national Marquette Law School poll last month, two thirds of adults polled said abortion should be legal in at least most cases.

In 1973, the U.S. Supreme Court ruled in Roe v. Wade that pregnant people have a constitutional right to an abortion within the first two trimesters, when a fetus is unable to survive outside the womb, or about 23 or 24 weeks gestation. Reports last month on a leaked draft opinion from the court indicate that decision may be overturned this year. If that happens, a 173-year-old abortion ban in Wisconsin would go back into effect. Wisconsin Attorney General Josh Kaul has said he will not enforce the ban, though local law enforcement officials could choose to do so.

"Pregnant women may be confronted with serious dangers to their health if they continue with their pregnancy, but under Wisconsin's criminal abortion ban, that is not a legal basis for an abortion," Kaul said. "Doctors would be put in the impossible position of trying to determine whether the danger to a mother's health was so dangerous that they could lawfully provide an abortion, or if they might face criminal prosecution for providing the critical health care that a woman who is coming to them for medical services needs."

Dr. Allison Linton, an OB-GYN at Froedtert Hospital, said at the press conference the prospect of the 1849 abortion ban coming into effect scared her. 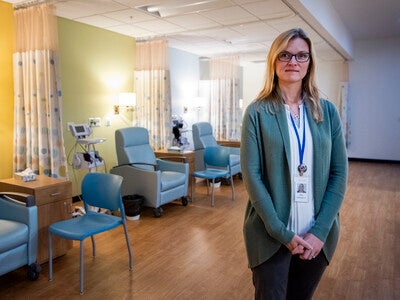 "I think about a prior 13-year-old patient who was pregnant after being raped by her uncle," Linton said. "I would have to turn her away."

Linton said the ban would force doctors to violate their Hippocratic oath to do no harm.

Evers has vetoed abortion bills sent to him by the Republican-controlled Legislature on multiple occasions, including provisions that would provide criminal penalties for doctors who don’t give medical care when a baby is born alive following an abortion attempt.

Republican Assembly Speaker Robin Vos has said he’d like to see exceptions for rape and incest if the 1849 ban goes into effect.

Senate Majority Leader Devin LeMahieu, in a statement, signaled his intention to "gavel out of another blatantly political special session call.”

Republican gubernatorial candidate Rebecca Kleefisch called on Republicans to reject the special session in a tweet.

Gracie Skogman, legislative director for Wisconsin Right to Life, said in a press release the organization was "disappointed but not surprised" by Evers’ call for a special session.

"Wisconsin Right to Life will continue to advocate for the right to life for all, to ensure that our children and grandchildren have the opportunity to be born and live in a state that defends life," Skogman said.

Calls for special sessions of the Legislature during Evers' time in office have met with limited success. In multiple cases, the Assembly and Senate have convened and adjourned special sessions without any debate or votes.