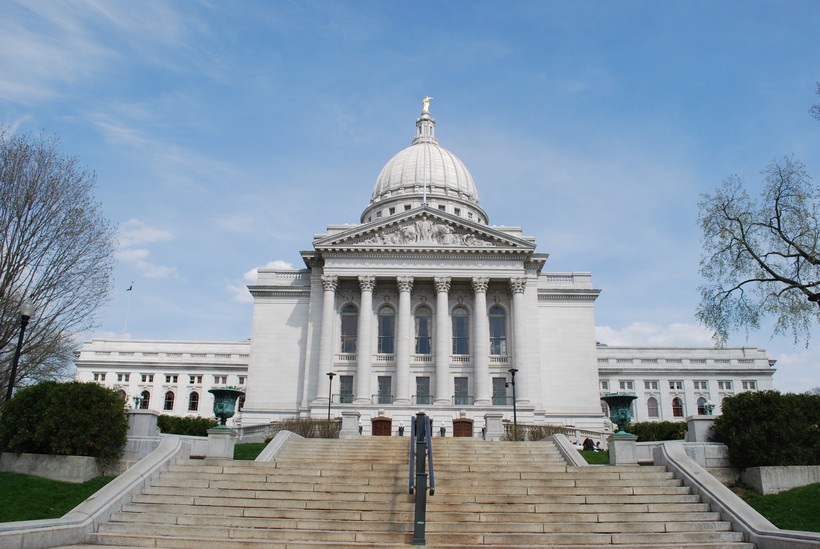 Wisconsin Republicans on Thursday began and ended a so-called "special session" on gun laws without any debate or votes despite a call from Gov. Tony Evers to act on plans to expand background checks and instate a "red flag" law in the state.

Evers called a special session on gun measures last month after several weeks of pushing GOP lawmakers, who control both the Assembly and state Senate, to move forward with the gun bills.

Under the first bill backed by the governor, background checks would be expanded to private gun sales in Wisconsin, including sales at gun shows. The second bill would instate a red flag law that would allow law enforcement to temporarily revoke someone’s gun ownership rights if they’re deemed to be a threat to themselves or others.

Republicans have argued the bills violate Second Amendment and due process rights. They also declined to advance their own gun-related bills for the special session.

Both the Assembly and Senate convened and immediately adjourned the special session without debating the bills or any others related to gun policy.

"I don't think these bills solve the issue of gun violence, there are many other things that play into that, including mental illness," Senate Majority Leader Scott Fitzgerald, R-Juneau, told reporters shortly after convening the session in the Senate around 8 p.m. and adjourning it roughly 30 seconds later.

"I think if we could come up with a solution to the issue of gun violence or these mass shootings, then I think we — not only the Wisconsin Legislature, but every legislature — would be calling themselves into session to fix this issue," Fitzgerald said.

A similar action took place in the state Assembly, which convened and adjourned after about 15 seconds around 9:30 p.m.

Earlier in the day, the Vos told reporters, "We've already had these debates, we know where people stand."

Vos added the Assembly's action on a number of bills related to suicide prevention on Thursday — as well a trio of veto overrides related to state mental health care funding — better address the root of gun violence than the governor's plans.

"I don't necessarily want to spend a bunch of time playing politics with this, which is what it seems my Democratic colleagues really want," he said.

"We want to focus on where the vast majority of the issue really lies," Vos added. "I wish Gov. Evers would stop playing politics with this topic. It’s all about polls and politics, not policy and progress."

Shortly after the Assembly adjourned, Evers released a statement denouncing the action.

"Republicans essentially just told 80 percent of Wisconsinites and a majority of gun owners, 'go jump in a lake,' because they didn’t have the courage to take a vote — much less have a dialogue — on two bills about universal background checks and extreme risk protection orders that we know can save lives," the governor said.

The governor has cited strong public support for both expanding background checks and the red-flag law. According to recent polls from Marquette University Law School, both measures have at least 80 percent approval from Wisconsin residents.

"You are only two of 132 members of the Legislature. The people of the state expect more of their elected officials and they deserve to know where each of those 132 members stand on these common sense proposals," Evers wrote. "If you refuse the people of this state a vote on these proposals, you are once again denying the will of the people, circumventing the democratic process, and refusing to do your jobs as elected officials."

"The issue is not going away," said Assembly Minority Leader Gordon Hintz, D-Oshkosh. "We shouldn't have to wait until the next mass shooting to get more urgent attention on it."

Democratic members of the state Senate convened in the Senate chamber at 2 p.m. to mark when the governor called for the session to begin. They held a moment of silence for victims of gun violence. Democratic state senators join hands during a moment of silence for victims of gun violence in the state Senate chambers on Nov. 7, 2019. Laurel White/WPR

"The public is demanding action on these issues ... we are answering the call of the special session from Gov. Evers," said Senate Minority Leader Jennifer Shilling, D-La Crosse. "We are here, we are ready to vote."

Sen. Lena Taylor, D-Milwaukee, called on Republican lawmakers to "do their jobs."

The senators were joined by a number of gun control advocacy groups and Attorney General Josh Kaul, a Democrat, for a press conference after they gathered in the Senate chamber.

"We're going to continue calling for action and drawing attention to this issue," Kaul said. "The truth is on our side. These bills will make communities safer."