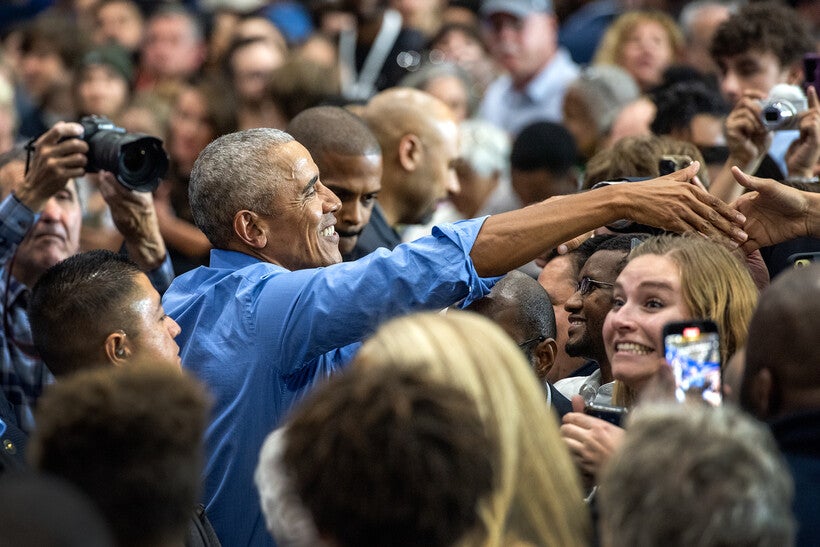 During Wisconsin stop, Obama says Evers, Barnes will 'fight for you'

The former president warns the future of democracy hinges on the 2022 races for governor and US Senate
By Shawn Johnson
Share:

Former President Barack Obama told a crowd of supporters packed into a Milwaukee high school gymnasium Saturday that they should vote for Democratic Gov. Tony Evers and U.S. Senate candidate Mandela Barnes because they'll fight for them on everything from improving the economy to protecting democracy.

"What you should be asking yourself right now is who will fight for you?" Obama said. "Who cares about you? That's the choice in this election, all the other stuff is surface stuff is distraction."

In a speech that lasted roughly 50 minutes, Obama drew parallels between himself and Barnes, who would be Wisconsin's first ever Black U.S. senator.

"I know that there's some folks — maybe not in this auditorium, but elsewhere in Wisconsin — who think that just because Mandela's named Mandela, he must not be like you. He must not share your values," Obama said. "It sounds pretty familiar, doesn't it?"

Obama described Barnes as the son of a third-shift worker and a public school teacher who had grown up in one of Milwaukee's poorest neighborhoods to become Wisconsin's lieutenant governor.

"He's fought every step of the way to make sure Wisconsinites have opportunity to get ahead just like he did," Obama said. "He believes in the American dream. If that's not a true blooded Wisconsin American, I don't know what is." 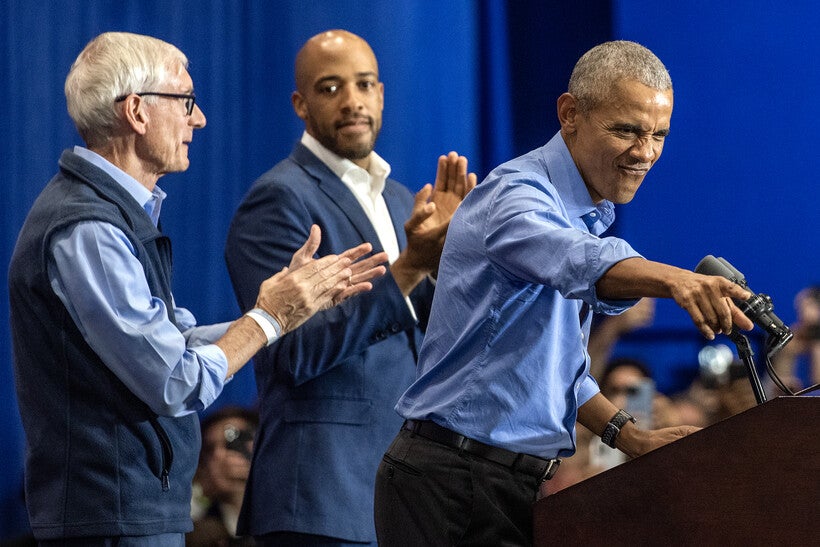 Obama described Evers as the one person keeping Republicans from forcing through "unpopular" laws, praising Evers for vetoing bills on issues ranging from guns to education to abortion.

"Right now, the only thing standing in their way is Tony Evers," Obama said. "I know Tony is low-key. Self-deprecating. He's got a little more of a Clark Kent vibe than a Superman."

"But don't let the glasses and the necktie fool you," Obama continued. "Because Tony is tough. He's single-handedly keeping Republicans from driving the car off the road."

Obama also attacked Evers' opponent, Republican construction executive Tim Michels, over his long opposition to abortion and his reluctance to increasing public school funding in the next budget. He attacked Republican U.S. Sen. Ron Johnson as someone who was out of touch, echoing the theme pushed for months by the Barnes campaign.

Obama also urged Democrats to vote in races for the state Legislature, saying they would be critical to preventing Republicans from winning a veto-proof majority that could override Evers.

Obama spoke from the North Division High School Field House, a place he said he had visited a total of three times, most recently in 2018. Democrats in swing states like Wisconsin have increasingly turned to Obama as their closer in the 2022 election season as Democratic President Joe Biden continues to suffer from low approval ratings.

In a statement released before Obama spoke, Republicans connected him to Biden.

"After a third failed term of the Obama-Biden agenda, Barack Obama isn’t the golden ticket Wisconsin Democrats think he is," said Rachel Reisner, a spokesperson for the Republican National Committee. "All Wisconsin families will see is more crime, more economic uncertainty, and more financial pain if they elect rubber stamps like Tony Evers and Mandela Barnes." 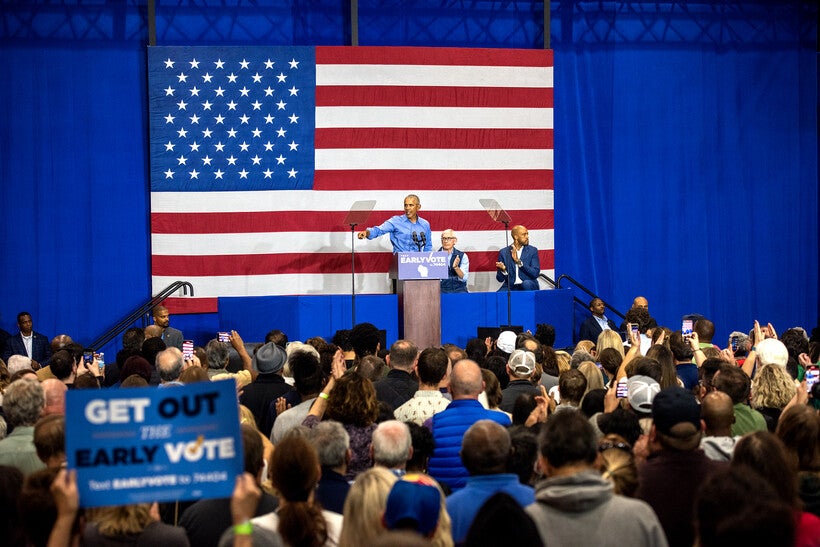 A warning about democracy

Obama spoke at length during his remarks about what he described as the threat to democracy if Republicans gain control of government in Wisconsin and Washington D.C. He made allusions to former Republican President Donald Trump, who has spent the past two years falsely asserting that he won the 2020 election.

"These days, just about every Republican politician seems obsessed with just two things: 'Own the libs' ... and getting Donald Trump's approval," Obama said.

In 2008, Obama said opponent, former U.S. Sen. John McCain, gave a concession speech that wished him luck for the good of the country. In 2016, Obama said he wasn't feeling good when he realized Trump had won.

"But I stayed up till three in the morning until it was finally decided, and then I had to call him and say congratulations because that's how democracy is supposed to work," Obama said. "And we ensured a peaceful transition of power."

Obama accused Republicans of "making stuff up," citing comments Johnson made when he referred to the Jan. 6, 2022 insurrection of the U.S. Capitol as "by and large ... a peaceful protest."

"Now, if that's the lesson you take away from a violent insurrection storming the U.S. Capitol, I don’t know what to tell you," Obama said. "But I do know you probably shouldn't be serving as Wisconsin's representative to the U.S. Senate. Because that's not how our democracy is supposed to work."

Obama noted that Michels has pledged that if elected he'll dissolve the Wisconsin Elections Commission and has said that he'd be open to signing a bill overturning the results of the 2020 election.

"And to say the obvious, if somebody's openly obsessed with changing the last election, he probably should not be in charge of overseeing this one coming up," Obama said.

Obama said he understood that people had other issues on their mind, like buying groceries, paying the bills and taking care of their kids.

But Obama said that throughout history, and during his time as president, he had seen what happens to countries where democracy is lost.

"Once self-government goes away, it's hard to get it back," Obama said. "It's dangerous. And people get hurt."

While Saturday's event was focused on Evers and Barnes, a large group of Democrats spoke before Obama at the rally and watched him from the crowd. 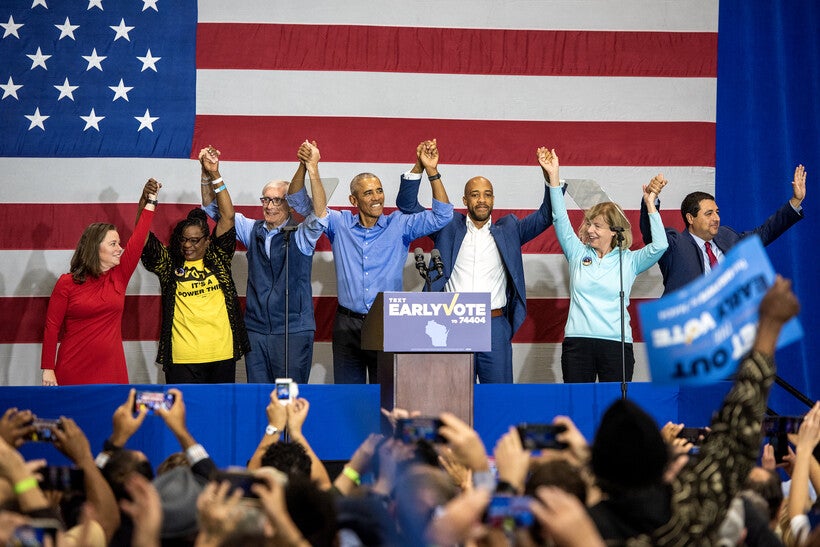 In remarks before Obama spoke, Barnes recalled the former president's speech to the 2004 Democratic National Convention when he was still a state senator from Illinois. Barnes said the speech changed his life and inspired him to get into politics.

"There was someone whose story sounded a little bit like mine. Someone who talked about the same issues that I saw day in day out," Barnes said. "And seeing Barack Obama on that stage — it inspired me and made me realize that maybe if I worked hard enough that I could have the power to make a difference, too."

Like other Democrats who spoke, Barnes attacked Johnson for his opposition to abortion, including his suggestion that if someone doesn't like their state's abortion laws, they can move.

"It is careless. It is callous," Barnes said. "But I do believe that the women of this state will band together and move Ron Johnson out of the U.S. Senate."

In September, Barnes did not attend a Milwaukee visit by Biden.

Biden has not been a rallying cry for Democrats this election cycle. The most recent poll from Marquette University found 42 percent approved of the way he's handling his job compared to 55 percent who disapprove.

Similarly, Republicans have also minimized their mentions of Trump in the general election. The same Marquette survey found only 37 percent have a favorable view of Trump compared to 55 percent who have an unfavorable view. Trump was far more active ahead of Wisconsin's primary election when he endorsed Michels and campaigned on his behalf, attacking Republicans like Assembly Speaker Robin Vos in the process.

Several polls have showed Evers and Michels in a dead heat, and while Johnson has trended ahead of Barnes, Democratic Party of Wisconsin Chair Ben Wikler said Wisconsin's history of close elections would play out again this year. 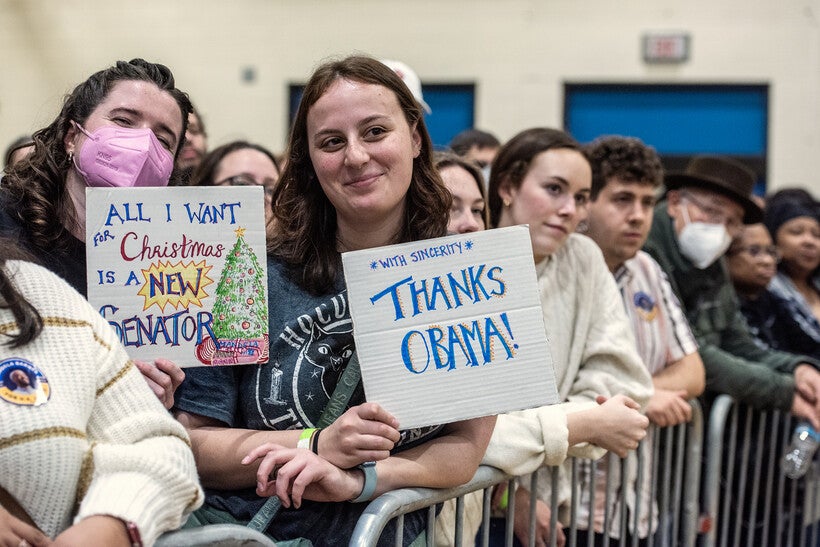