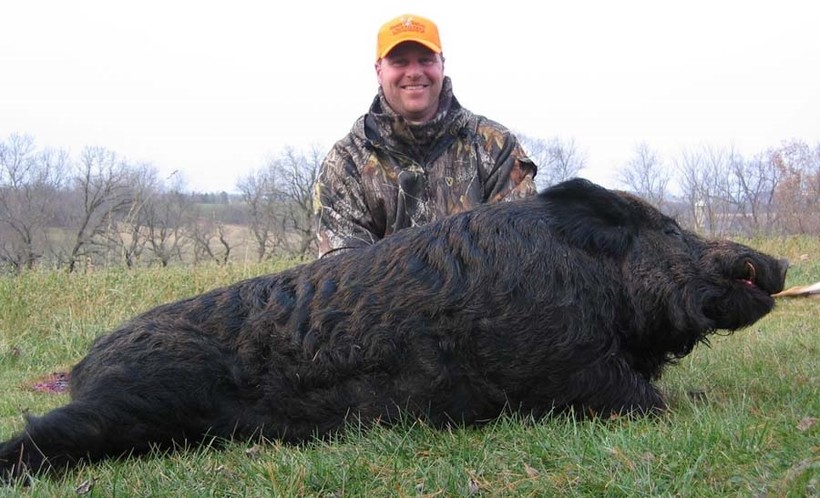 Some species of feral pig can weigh as much as 450 pounds. Courtesy of Wisconsin Department of Natural Resources

DNR To Hunters: Look Out For Feral Pigs

Hunters heading out for the opening weekend of Wisconsin's gun deer season should keep an eye out for feral pigs — and shoot if they see one. That's the message of the state Department of Natural Resources in a recent release.

The state doesn't have a confirmed, free-ranging feral pig population. DNR biologist Liz Tanner said the state wants to keep it that way.

"If they become established in an area, they can be incredibly difficult to remove and just cause a ton of damage," Tanner said. "And so everyone's pretty vigilant about keeping them off the landscape."

Wild herds of feral pigs have become a huge problem in Texas and many southeastern states, including Mississippi and Alabama. The U.S. Department of Agriculture, which recently launched a $75 million eradication program, estimates the damage they do at $2 billion per year, mostly to farmers' crops but also to property.

In Wisconsin, biologists in 2005 tracked a herd of some 130 feral pigs in Crawford County, which is in the southwestern part of the state. But hunters hit the area hard, and Tanner said scientists consider that population likely eradicated, with no confirmed sightings in more than five years.

Still, because of the potential damage the creatures can do, the state encourages their removal whenever they are spotted. There is no limit on the number of feral pigs hunters can kill, and there's no special hunting license required beyond a sports or small game license. Landowners can shoot them on their property without a hunting license.

"The department does promote aggressive removal anywhere they are reported," Tanner said.

What's a feral pig? One of the most troublesome species in other states, the Russian wild boar, can weigh up to 450 pounds. But Wisconsin defines as feral any pig living in an unconfined environment outside of an enclosure for more than seven days. Note that it's not legal to kill an escaped domestic pig within that seven-day window. But Tanner said the DNR has had reports of some escaped domestic pigs outside that window that hunters could encounter.

Though they are massively destructive in Texas and other states, hunting feral pigs has also become a big business in many places. That's what led to their introduction in Wisconsin. In 2008, authorities charged Robert Scott Johnson with illegally importing and releasing 31 feral pigs on land near the Kickapoo River. Johnson ran the Hard Rock Elk Farm near Gays Mills. Authorities attributed the spread of the now-eradicated herd in that area to his actions. Johnson was ultimately acquitted of the charges.

Any hunter who does kill a feral pig should report it to the state using the feral pig reporting form. More information is available at the DNR's feral pig hunting page.