Cranberries, Wisconsin's Most Profitable Fruit, Face An Uncertain Future
Cranberries Have Resilience As Native, Perennial Crop, But Remain Vulnerable In A Changing Climate
Home
/
On The Table
Monday, March 2, 2020, 6:00am
By
Mary Kate McCoy
Share:

More than half of the world’s supply of cranberries comes from Wisconsin. One of only three native crops to be commercially cultivated in the United States, cranberries have adapted alongside Wisconsin’s climate. But warming winters and increasing extreme weather events are leaving the cold-hardy crop vulnerable. In this series, WPR is exploring how the state can adapt to and mitigate the affect climate change is having on some of Wisconsin’s most iconic foods.

There are cranberry vines in Wisconsin that have been producing the vibrant, tart fruit for more than 100 years.

A perennial, native plant to Wisconsin, cranberries are well adapted to the state’s climate and landscapes. And the cranberry growers here have gotten very good at engineering production to make Wisconsin the No. 1 producer of cranberries in the world.

Bringing in nearly $1 billion in annual revenue to Wisconsin, according to the state Cranberry Growers Association, Wisconsin’s cranberry industry makes an enormous mark on the state’s economy. About 250 farms produce more than half the world’s supply on 21,000 acres, the majority running along Highway 173 between Tomah and Wisconsin Rapids in central Wisconsin.

Able to withstand Wisconsin’s often low temperatures, cranberries are a hardy crop that have thrived alongside the region’s ample supply of water, cold winters and sandy, acidic soil.

But experts are worried about the long-term effects of climate change on the fruit.

Intense rainfall events can increase the fruit’s odds of experiencing rot; an extreme hailstorm can take out an entire crop; an early thaw can trick a bud into flowering too soon; and warming winters can increase pest pressure.

Farmers like Nicole Hansen, of Cranberry Creek Cranberries in Necedah, have spent decades managing cranberry beds. She says weather has always been unpredictable.

"From my standpoint ... we're going to analyze things, we're going to try to be proactive," she said. "But that's agriculture and that's our job ... we work right along with Mother Nature and watch what happens from a weather standpoint." 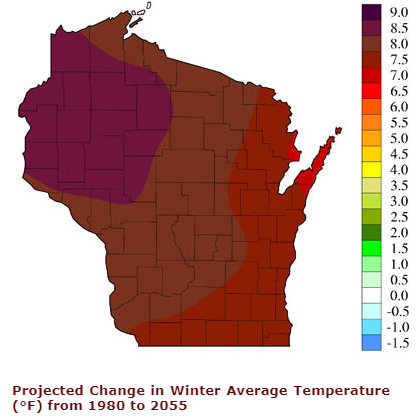 Wisconsin has already warmed by about 2 degrees Fahrenheit, but winter has experienced the greatest increase in temperature. By mid-century, Wisconsin winters are expected to be 5 to 11 degrees warmer than they were in 1980, according to the Wisconsin Initiative on Climate Change Impacts.

Cranberries need both ice cover protection and dormant chill hours to produce fruit in the summer. Repeated freeze-thaw disruptions, caused by erratic winter temperatures, and events like 2019's polar vortex are asking a lot of the plant.

"When you change the conditions and those winters become more extreme, the plant is disoriented," said Amaya Atucha, fruit crop specialist at the University of Wisconsin-Madison.

"Going from really, really cold to sometimes getting warm in the winter ... they have to adapt to both of them," she continued.

For cranberries, the risk is greater.

Unlike with annual plants that start fresh every growing season, cranberry growers have to keep the plant healthy year after year — as a perennial plant, it takes three to four years before a new plant will produce fruit.

Cranberries have built in resilience as a native plant, but those strengths can also be limitations amid a changing climate, said Jed Colquhoun, professor in the UW-Madison Department of Horticulture, who specializes in commercial fruit and vegetable production.

"That variety was improved and selected for, let's say, 100 years ago," he said. "That doesn't mean that's necessarily right for a changing climate. So, can it tolerate more stress? Maybe ... but the risk is also much higher because it's so expensive to change."

Atucha said at this point, issues related to climate change are mostly impacting the fruit quality and what it takes to have a good production year.

Fruit quality and moisture levels are deeply connected. And as a crop highly dependent on exterior quality, too much water isn’t good for any aspect of cranberry growing.

Graph courtesy of Dan Vimont, director of the Center for Climatic Research

"It's wet all the time, we don't get that drying cycle," Colquhoun said. "So not only do cranberries not grow well, but some of the pests that will reduce cranberry vine growth and yield are more prolific in wet environments."

While the classic Wisconsin cranberry image features the tiny red fruit floating in water — perhaps contrary to popular belief — cranberries aren’t actually grown in water. Farmers flood the beds to ease harvest and the cranberries float because they contain a tiny pocket of air.

Cranberry growers protect the fruit buds in the winter by covering the beds with a thick layer of ice, which acts as insulation for the plant.

"We’re like ice engineers," Hansen said. "We're probably the only people in Wisconsin who like it to get below zero."

"We’re like ice engineers," said cranberry farmer Nicole Hansen. "We’re probably the only people in Wisconsin who like it to get below zero."

But rising winter temperatures have researchers worried about how growers will be able to handle ice management.

"We're talking about having to do more to get the same," she said. "That means they have to run their pumps, they need to use fuel to move water, they need to coordinate all of the ways ... to protect them."

2019 was an especially difficult year for Wisconsin cranberry growers.

Tom Lochner, executive director of the Wisconsin Cranberry Association, said in his 30 years in the business he hasn’t seen a normal growing season. Weather brings different challenges every year, but 2019 stood out.

Hansen called 2019’s weather an adventure. Late January’s polar vortex led into a late spring and too many cool and rainy summer days for the fruit to size up to the quality consumers expect.

"This year we had a lot of dips and not much to level that out," she said. "We raise our families here, right where we raise our cranberries. We’re kind of all stuck together ... But ultimately 85 percent of it is controlled by the weather."

Southern Edge Of Their Range

Wisconsin is a diverse state in agriculture production. Many crops that thrive in the state are near the southern edge of their range and if the climate were to change to the point they’re not conducive anymore, it’s not as simple as moving them farther north, said Chris Kucharik, chair of the UW-Madison Agronomy Department.

Travel north of where cranberries are grown and you quickly run into different soil types and forested land.

"The diversity also leads to a lot of complexity in how climate change will affect these different crops because it isn't going to affect everyone the same," he said.

"Some of the more traditional row crops ... we’ll probably be OK with some of those," Kucharik continued. "But the other more specialty crops are the ones that are going to suffer the most."

Plant ranges are already shifting northward, he said, as are pests and insects.

"There's various agricultural pests and pathogens that are often winter-limited ... because they can't handle the Wisconsin winters," he said. "And so one of the expected impacts of rising temperatures is that those kinds of crop pests we haven't had to deal with traditionally, we may see more frequently in the coming decades."

But Williams said we should expect surprises — lessons from past climate change also show that while general predictions can be made, species respond individually.

While cranberries may be native to Wisconsin, the way they are grown today is closer to an engineering feat. The cranberries are grown in artificial bogs that mimic natural landscapes to maximize production and efficiency.

Look out at a cranberry farm in Wisconsin and you’ll see rows of sunken beds set up like a grid. In winter, they appear like a series of frozen pools lined up side by side.

Hansen said that layout is characteristic of Wisconsin cranberry growing and maximizes efficiencies.

For a crop that requires a lot of time and energy to manage, efficiencies matter.

"Cranberries are by far, of the maybe four dozen crops I’ve worked with in my career ... the most intensively managed and monitored," UW's Colquhoun said.

"Cranberries are by far, of the maybe four dozen crops I’ve worked with in my career ... the most intensively managed and monitored," said UW-Madison Horticulture Professor Jed Colquhoun.

The beds are flooded multiple times a year with water typically kept in reservoirs near the marshes — in the winter for ice protection, in the spring to control for early pests and to protect the flower bud from frost and during the fall to facilitate harvest.

After flooding, the water is recycled back into the reservoir.

There are critiques that the fertilizers and pesticides used during the growing season can pollute neighboring waterways, and concerns that climate change could increase the pressure from invasive species, pests and disease and require heavier pesticide use.

But Atucha says cranberry growers are mindful of pesticide and fertilizer use, in part because of tight regulations in the international market. They also must develop a nutrient management plan that confirms their fertilizer use lines up with the fruit’s need. 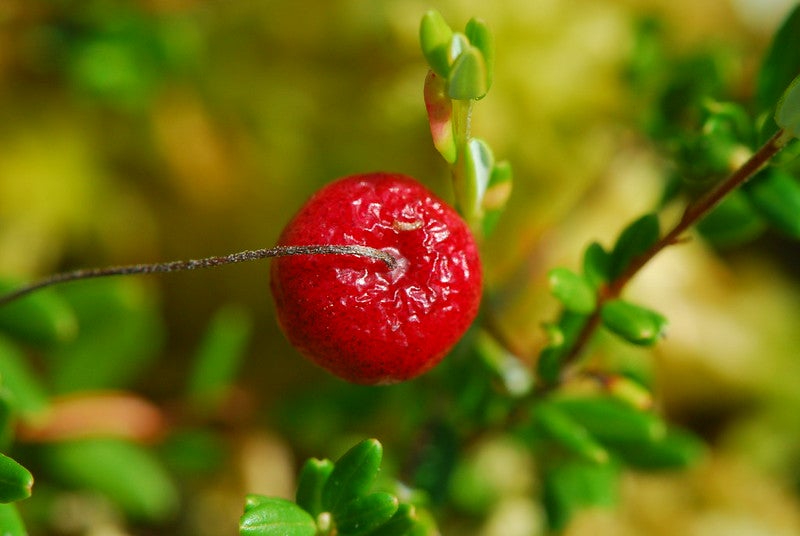 One of only three native plants — blueberry and Concord grape are the others — in the United States to be commercially cultivated, they do offer benefits to the ecosystem and environment, Atucha said.

As a perennial plant, cranberries capture and store carbon that would otherwise be lost to the atmosphere if it were an annual crop.

And for every acre of cranberry production, there are an average of six acres of support land, typically wetlands and forests which sequester carbon and can help lessen the impact of intense rainfall events, Colquhoun said.

Running a cranberry farm is a long-term commitment — the average cranberry farm in Wisconsin has been operated for generations, and very few people without connections come into the business.

Lochner, of the cranberry association, said looking to the future, growers are concerned about being able to pass an economically viable cranberry farm on to the next generation.

"There's been a heritage of the family farms and passing that on down to the families," he said. "And one of the keys to that is that it has to be sustainable and provide a good living and a good life for the people that are out there on farms."

The question with agriculture is how to build more resilience, Colquhoun said.

Many forms of agriculture are looking toward plant breeding and genetics as a way to withstand weather variability in the future. But as a perennial crop, cranberries are at somewhat of a disadvantage.

Researchers are still figuring out what plant traits could be more resilient to changing weather patterns, Colquhoun said. And, farmers are running a business that needs to be economically viable.

"Keep in mind how expensive it is to change varieties," he said. "It's a long-term commitment — you're looking at three or four years with no income from that production area to get it back up to speed."

Colquhoun doesn’t expect cranberry production to end in Wisconsin, but it will likely look different in years to come, he said.

Like potatoes and other crops grown in Wisconsin, diversifying farms and growing regions will help build in that resilience, Colquhoun said. One alternative crop he’s working on: hazelnuts.

"What happens if we have a frost in July and lose a crop? Or what if we have a hail storm roll up Highway 171 in Wisconsin?" he said. "We need a backup plan."