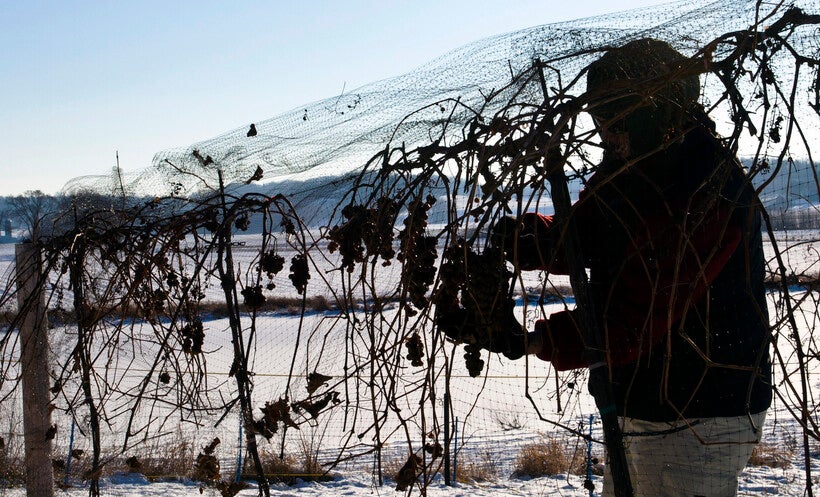 In this Dec. 8, 2010, photo, a worker picks frozen grapes that will be used to make ice wine from the vines at the Wollersheim Winery in Prairie du Sac, Wis. Ice wines originated in Germany but are now made in Canada, New York, Michigan and Wisconsin — places where the weather gets cold enough to properly freeze the grapes. Morry Gash/AP Photo

Wisconsin specialists say last week's extreme cold could cause more winter kill of fruits, alfalfa and other perennial crops in the state.

Amaya Atucha, fruit crop specialist at the University of Wisconsin-Madison, said grapes, apples and other fruits grown in the state aren't used to the frigid temperatures brought by last week’s polar vortex.

"We're really stressing the trees and the vines here with these temperatures, even when most of the cultivars that we grow here are quite cold hardy," Atucha said.

Atucha said some areas of the state did have the advantage of a thick snow cover before temperatures dropped, which can help insulate root systems.

"When you don't have snow, the entire soil freezes and the root system doesn't have a way to cope with these extreme cold weather temperatures so that would have been really devastating," Atucha said.

Ryan Prellwitz, president of the Wisconsin Winery Association, said many vineyard owners are worried about the buds that will produce this year's grapes.

"There's nothing we can do about it and we won't know the extent of the damage, if there is any, you never know. But I'm sure there will be in pockets of the state," said Prellwitz, who also owns Vines & Rushes Winery in Ripon.

Prellwitz said grape vines do have secondary and tertiary buds that can keep the plant alive if the primary bud is damaged, but they don't produce as much fruit.

He said producers can check buds during the winter, but they likely won't know the extent of the damage until spring.

That's also the case for apple orchards like Ecker’s Apple Farm in Trempealeau. Jess Ecker, one of the owners, said they won't know if their orchard has any winter damage until the trees become active in the spring.

She said one advantage of the frigid temperatures could be fewer pests this season.

"Best case scenario, your management is a lot easier. You can use a lot less chemical (pesticide), you're not going to find the damage on the crops. So in a lot of ways, that's extremely helpful for growers," Ecker said.

Ecker said apple trees are generally cold hardy, but a lot can depend on the health of the tree going into winter.

"Was there enough rain? Were they well-watered and healthy going into winter? If everything was great in October and November, they're going to be stronger when they wake up," Ecker said.

Fruit trees and vines that have experienced cold temperatures before are also better equipped to withstand the freeze. Atucha said the process is called acclimation.

But she said many of the fruit varieties in Wisconsin haven't experienced temperatures as cold as the state saw last week.

"It's going to be a test to see how hardy some of the new varieties are that might not have experienced the polar vortex that we had in 2014," Atucha said.

Farmers with perennial forages like alfalfa can also expect to see more winter kill this spring.

"It's like a soda bottle or a beer bottle that you have in the freezer. When the liquid freezes, what happens is that liquid breaks the container," Newman said.

Newman said any fields without snow cover will likely see substantial winter kill, but she said some fields might be more resilient if farmers didn't harvest the last cutting in the fall.

"In the fall, the alfalfa plant is kind of putting into the roots all the reserves," Newman said. "Those producers that took a last cutting and did not allow the reserves to build up, in a year like this where we have this extreme (cold), those will be hurting more."

Newman said farmers won't know the extent of the winter injury until spring.