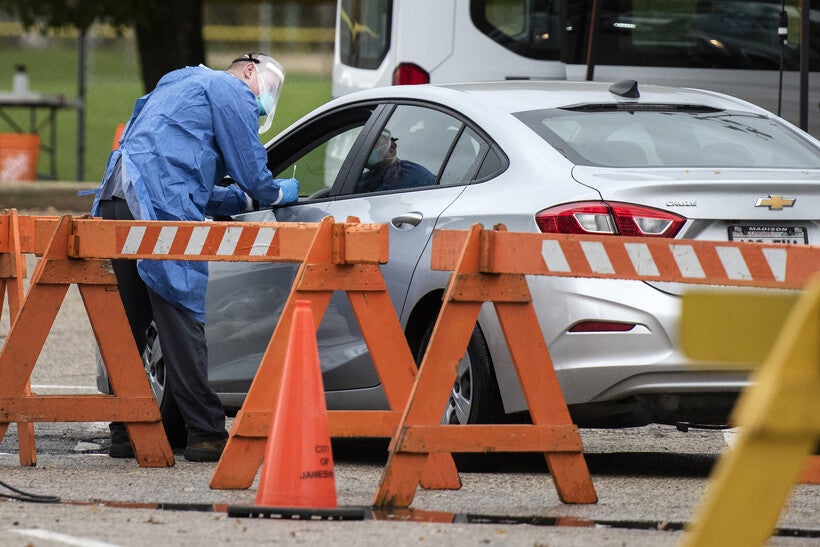 Number Of Cases Has Tripled Since Beginning Of September
By Danielle Kaeding
Share:

Coronavirus cases have tripled since the beginning of September among American Indians across Wisconsin as the state has witnessed a surge in new cases of COVID-19.

The Wisconsin Department of Health Services reported 2,374 cases of the virus among Native Americans on Thursday — that's up from 775 cases on Sept. 1.

The spike in cases among American Indians was first reported by the Milwaukee Journal Sentinel.

The surge in cases means deaths are occurring in tribal communities that could have been prevented, said German Gonzalez, medical epidemiologist and director of the Great Lakes Inter-Tribal Epidemiology Center.

"We are just getting exactly the same thing that is just happening around us," said Gonzalez. "It seems that every single effort that tribal communities are doing seems to be challenged by the overwhelming amount of cases surrounding our communities."

Many tribes enacted their own stay-at-home orders at the beginning of the pandemic and kept them in place after the Wisconsin Supreme Court struck down the state's "Safer at Home" order. Since then, several reissued orders or enacted new restrictions as the virus has surged statewide.

Wisconsin is now averaging around 3,400 daily new cases of COVID-19, which has claimed more than 1,700 lives.

State data shows the Fox Valley, northeastern Wisconsin and north central Wisconsin are hotspots for the virus, said Dr. Lyle Ignace, CEO of the Gerald L. Ignace Indian Health Center in Milwaukee. Menominee, Oconto, Shawano and Brown counties have the highest infection rates in Wisconsin and are home to or surround tribes like the Oneida Nation, Forest County Potawatomi and Menominee Indian Tribe.

"These are counties that really have significant numbers," said Ignace. "So, it's going to be impacting, not just Native numbers, but also non-Native as well."

Tribal communities in northern Wisconsin saw few cases of the virus during the state's stay-at-home order. The Lac du Flambeau Band of Lake Superior Chippewa extended its stay-at-home order until mid-June, limiting movement and access on tribal lands. The order wasn't re-issued, but a mask mandate and quarantine order remain in place.

Daniel Thompson, the tribe's incident commander for COVID-19 response, said they hadn't documented any cases of the virus until July. Now, he said cases have "skyrocketed" since September. The tribe had recorded 19 cases as of Sept. 17.

The changing weather and opening of universities and schools in the fall appears to be a catalyst that contributed to the rise in cases among American Indians, said Matthew Dellinger, associate professor in the Division of Epidemiology at the Institute for Health and Equity at the Medical College of Wisconsin.

The spread of the virus disproportionately affects Native Americans, who are at higher risk of complications from the virus. But Dellinger said the virus is not the only threat to tribes.

"I'm very concerned about low socio-economic populations, such as the tribes, and how they are going to suffer from the policies and the restrictions long term from this," said Dellinger.

Many tribes were forced to shut down their casinos earlier this year and some also closed their doors this fall. Gaming revenues often support essential government services and programs for tribes, including health care, education and law enforcement.

The National Indian Gaming Association projected earlier this year that 241 tribes nationwide, including Wisconsin's 11 tribes, could see a loss of $22.4 billion in gaming revenues due to the pandemic, according to the Wisconsin State Journal.

Thompson said Lac du Flambeau, which had closed its casino this spring, kept its doors open when cases began to rise this fall.

"The biggest reason we didn't close down again, like some other tribes have, is because we needed that revenue," said Thompson.

Thompson emphasized the tribe's incident command team is enforcing public health guidelines and safety measures at all tribal entities and buildings, including the casino.

Gonzalez said they're working with tribes to provide technology and assistance to help them monitor the virus and control infections.

"We continue fighting," said Gonzalez. "And we are hopeful because tribal communities and Native Americans are resilient."