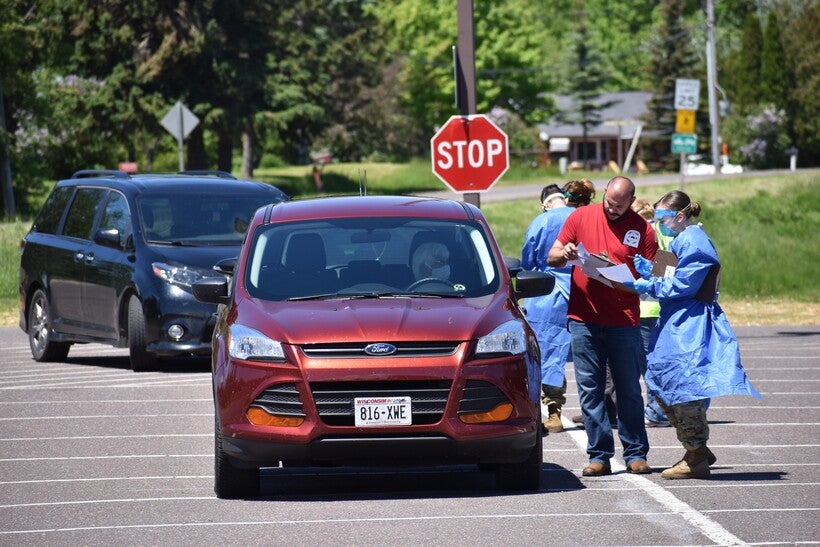 More than 350 people showed up to get tested for COVID-19 as part of a Wisconsin National Guard testing event in Red Cliff on June 12, 2020. Danielle Kaeding/WPR

State health data shows over 40 percent of all COVID-19 cases among Native Americans in Wisconsin have been reported in September, as the state continues to see the highest level of new cases since the beginning of the pandemic.

The Wisconsin Department of Health Services has recorded 571 cases among American Indian residents in September as of Tuesday, which accounts for 42 percent of the overall 1,346 cases confirmed since March. The state has now recorded more cases among Native Americans this month than it did in the first four months of the pandemic.

Native Americans make up about 1 percent of Wisconsin's population and COVID-19 cases statewide.

The recent surge in cases has prompted some tribes to reinstate stay-at-home or emergency orders, as well as urge people to avoid large gatherings and take precautions. Many tribes enacted their own stay-at-home orders at the beginning of the pandemic and kept them in place after the Wisconsin Supreme Court struck down the state's "Safer at Home" order.

The Oneida Nation extended its public health emergency declaration earlier this month, and the tribe has been under a less restrictive stay-at-home order. Public relations director Bobbi Webster said in a Facebook Live forum that COVID-19 cases have been steadily increasing on the reservation, with 176 cases as of Monday.

"It's not just because the kids went back to school, because the college kids are in school or because of the bars," said Webster. "It's because people are letting their guard down."

COVID-19 fatigue is among a "perfect storm "of factors that have led to a rise in cases both on and off the Menominee Indian Tribe's reservation in northeastern Wisconsin, according to Dr. Amy Slagle, medical director at the Menominee Tribal Clinic. Since Sept. 2, the number of COVID-19 cases on the reservation has grown from 19 to 75 cases as of Tuesday morning. The tribe has also recorded 76 cases among members living outside the reservation.

"Most of our cases have come from small gatherings where folks just let up on the distancing and the masking. We've had some cases related to Packer game parties or sharing rides without masks," said Slagle. "We've had some instances where one case appeared in the house in which there was overcrowding and limited ability for that person to isolate."

The tribe issued an emergency order on Sept. 16 to shut down tribal buildings, bars and restaurants on the reservation to slow the spread of the virus.

In northwestern Wisconsin, the Red Cliff and Bad River Bands of Lake Superior Chippewa both passed stay-at-home orders earlier this month due to an off-reservation gathering. Red Cliff Tribal Chairman Rick Peterson said a wedding in the nearby city of Washburn contributed to an uptick in cases on the tribe's reservation.

The tribe now has 28 confirmed COVID-19 cases, after months in which Red Cliff had recorded just four cases, said Peterson. Red Cliff's chair doesn't blame those who attended the wedding, but he feels the spread of the virus could've been prevented if people had taken precautions.

"In Native American communities, a lot of families live with elders, and some of the most vulnerable people in the community live together," said Peterson. "So, we don't want to expose them that way if at all possible."

The Red Cliff Tribal Council amended its stay-at-home order to an advisory on Monday after new cases began to decline. The tribe, which had more than 100 people under quarantine two weeks ago, has purchased isolation units to limit the spread of the virus.

Slagle said the Menominee tribe bought houses in the past couple months to convert into isolation housing, and construction is wrapping up on a facility that will be able to house 13 people.

Slagle said the rise in cases has been difficult for staff who are working longer days, since they recently extended hours at the clinic to increase access to COVID-19 testing. She said they've also experienced difficulty with contact tracing because many tribal members are difficult to reach by phone.

In those instances, nurses will try to locate people in person.

Dean Seneca would like to see more contact tracing conducted in person. Seneca has previously worked as a scientist for the U.S. Centers for Disease Control and Prevention and served as director of the Great Lakes Inter-Tribal Epidemiology Center. He now works with tribes on COVID-19 response as CEO of his consulting agency Seneca Scientific Solutions Plus.

"Face-to-face should be the primary method in all of rural America and in Indian country. And that's why we have cases that are rising very fast in rural America, because of many of these deficiencies," said Seneca.

He advises tribal communities nationwide to transition from over-the-phone contact tracing and train contact tracers who understand the tribal community, history, language and culture. Seneca said in-person tracing helps health officials understand the extent of the exposure among families, and better detect when people may be lying about their potential exposure to the virus, especially when those people show visible signs of illness.

Slagle said they haven't had any issues with people refusing to name contacts on the Menominee reservation, adding that they often know how to reach people because they're a small, close-knit community.

Still, tribes are remaining vigilant and are well-aware that members are often at higher risk of contracting the virus due to multiple families living under one roof, and underlying medical conditions that make them more vulnerable to the virus.

Indian Health Services reported 1,724 confirmed COVID-19 cases as of late Sunday in the Bemidji region, which encompasses tribes in Wisconsin, Minnesota and Michigan. The data doesn't likely reflect the full extent of exposure since reporting by tribes and affiliated programs is voluntary.

Red Cliff's Peterson said they're grounding whatever next steps they take to protect residents in science.

"We're going to look at what our medical professionals tell us, not politics or any other outside influence," said Peterson.

Seneca said many tribal communities have taken steps like checkpoints to monitor traffic in and out of their communities to prevent the spread of the virus, including the Chippewa Cree and Northern Cheyenne tribes in Montana. The Bad River tribe in northern Wisconsin restricted non-tribal residents' access to the reservation earlier this year to limit exposure.

Seneca said people need to embrace basic prevention practices that aren't widely followed right now, as well as tracing and isolating those who are sick or may have been exposed.

"Stick to it, and stick to your guns, and that's how that's how you really stop the spread of COVID-19," said Seneca.