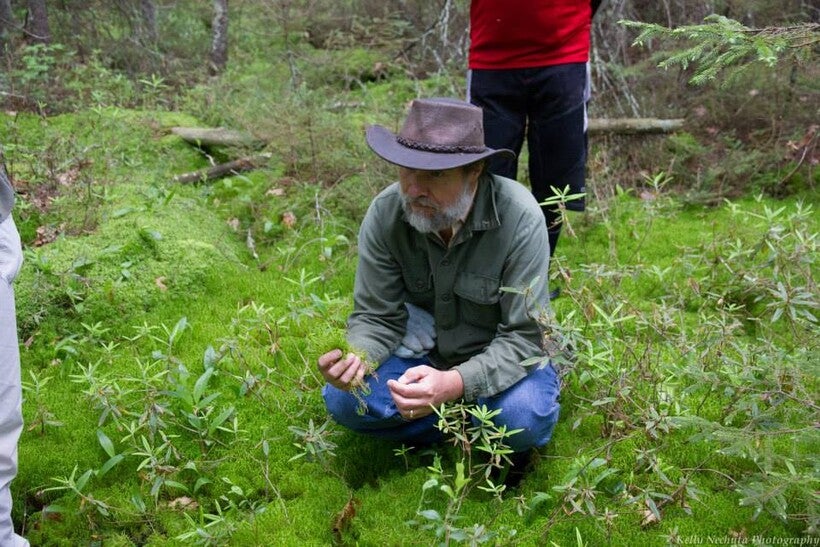 Mike Heim, a natural sciences professor, brought his Earth Science class at the Lac Courte Oreilles Ojibwe University to visit geologic formations in October. Heim said they discovered a trace fossil for a type of mollusk dating back to the Cambrian Period more than 500 million years ago. Photo courtesy of Mike Heim

A class at Lac Courte Oreilles Ojibwe University recently discovered evidence of creatures that once thrived along an ancient seashore half a billion years ago in northern Wisconsin.

Mike Heim, the university’s natural sciences professor, takes students in his Earth Science class on field trips every fall to visit geological formations. They range from 1.7 billion years old to glacial deposits left behind about 12,500 years ago. In October, the class visited the Mount Simon sandstone formation which extends along the Upper Mississippi Valley and southern Great Lakes area and dates back more than 500 million years to the Cambrian Period.

Heim said his students were looking along an area a couple miles from the university in Hayward where the town had blasted bedrock apart to widen a road when they came across impressions in a rock. At first, Heim thought the scrapes might be from a backhoe or earthmoving equipment.

"But then when I looked closer, I realized that, no, this was not caused by humans," Heim said. "I realized that it was some sort of trace fossil of some animal that had crossed the sand of this shallow beach area that long ago. That was really exciting. My students, they were all enthused about it, too."

A class taught by Mike Heim at Lac Courte Oreilles Ojibwe University in Hayward discovered a trace fossil that appears to be some type of mollusk from the Cambrian Period more than 500 million years ago. At that time, tropical seas covered much of Wisconsin. Photo courtesy of Mike Heim

After some online research, Heim said his best guess is that it’s a trace fossil — fossil of a trail or footprint — known as Climactichnites that was likely produced by some type of mollusk or mollusk-like animal. Researchers have found it’s one of the largest known Cambrian trace fossils, and the animals could have reached up to more than 2 feet in size. Similar trace fossils have been found in the Elk Mound Group sandstone formation in central Wisconsin.

In the past, Heim said he had taken his class on field trips to another location that had sandstone boulders with tiny fossils of seashells or brachiopods.

"But this is by far the biggest fossil that we found in that area, so it was really, really exciting," he said.

Such fossils are not typically found in northern Wisconsin due to glaciers and erosion that have worn down bedrock over millions and millions of years, Heim said. The Cambrian period marked the beginning of an explosion of life where animals dramatically diversified. Heim said it’s rare to find fossils of animals any time before that period. 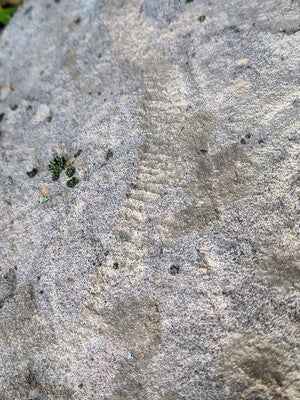 A class taught by Mike Heim at Lac Courte Oreilles Ojibwe University in Hayward discovered a trace fossil that appears to be some type of mollusk from the Cambrian Period more than 500 million years ago. At that time, tropical seas covered much of Wisconsin. Photo courtesy of Mike Heim

"During Cambrian time, Wisconsin and most of North America was located just below the equator, so nice tropical seas just to the west of the LCO reservation," Heim said. "And, the shoreline fluctuated between Hayward and St. Croix (County), and that was due to ice ages coming and going in the Southern Hemisphere."

At the time, the shallow sea was bordered by higher ground known as the Wisconsin Dome. Heim said a large river that followed where the Namekagon River flows today carried eroding sands down to the sea, and currents spread that sand along the shoreline. Heim compared the area then to that of Wisconsin Point, which is a large freshwater sandbar on Lake Superior.

During another visit, Heim said he and a reporter with the Sawyer County Record spotted trace fossils for jellyfish in the sandstone.

"We found the jellyfish impressions in one of the large blocks that they had bulldozed off to the side," Heim said. 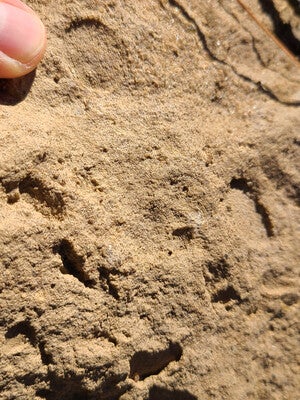 A class taught by Mike Heim at Lac Courte Oreilles Ojibwe University in Hayward discovered a trace fossil for jellyfish from the Cambrian Period more than 500 million years ago. At that time, tropical seas covered much of Wisconsin. Photo courtesy of Mike Heim

It's not the first time remnants of jellyfish have been spotted in Wisconsin. More than 20 years ago, fossilized impressions of jellyfish ranging up to 3 feet wide were unearthed at a quarry near Mosinee, which is about 15 miles south of Wausau. Thousands became stranded in a small lagoon more than 500 million years ago only to be buried by sand.

Jellyfish imprints spotted on the LCO reservation are about an inch wide. Heim said he hasn’t reached out to any geologists about the finding, but he welcomes anyone who may be able to shed light on the trace fossils and animals who left them behind.

He said the discovery shows how geological changes have shaped the world over time.

"Dinosaurs come and go. Seas come and go. So, it just is another wonderful piece of proof as to how interesting the history of the Earth really is," Heim said. "How amazing the whole story of northern Wisconsin is."