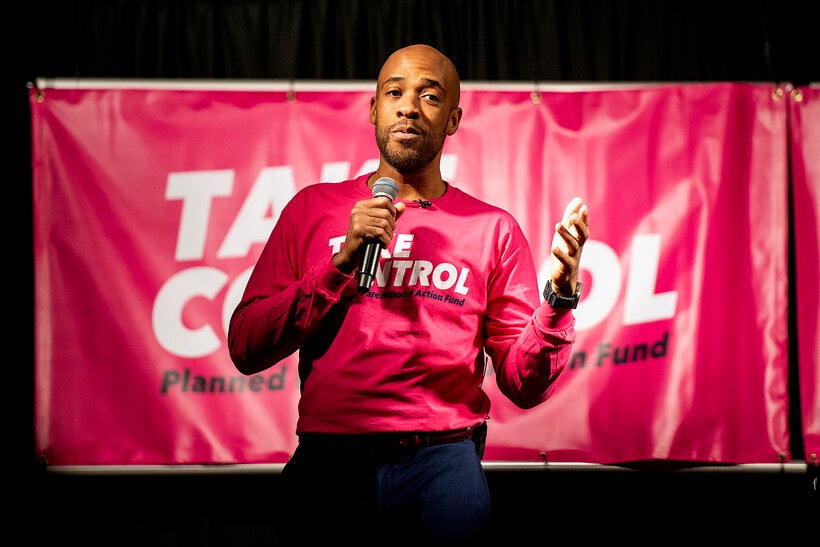 Republican groups have spent more than $29M on the race. With a month to go, the lieutenant governor wants to take back the initiative.
By Rich Kremer
Share:

Almost everything went right for Lt. Gov. Mandela Barnes in his Democratic primary for U.S. Senate. The general election campaign has been a different story.

Candidate after candidate dropped out of the primary to endorse Barnes, who had established himself as the progressive standard-bearer. Throughout his political career, Barnes had supported policies like Medicare-for-all universal health care and a rapid transition to renewable energy. His progressive endorsements — including U.S. Sens. Bernie Sanders of Vermont and Elizabeth Warren of Connecticut along with U.S. Rep. Alexandria Ocasio-Cortez of New York — were second to none.

But in the months since the primary, Republican U.S. Sen. Ron Johnson and his GOP allies have painted Barnes' record — and those endorsements — as liabilities. And Barnes has struggled to frame the Senate race on his own terms.

At a mid-September campaign rally at a farm in rural St. Croix County, Barnes was promoting a new endorsement from U.S. Sen. Amy Klobuchar of Minnesota, who ran as a moderate during her campaign for president two years ago. As she stood by Barnes, Klobuchar praised Wisconsin's other U.S Senator, Democrat Tammy Baldwin.

"In my mind, you shouldn't have one incredible, awesome, respected U.S. senator out of the state of Wisconsin," Klobuchar said. "You should have two."

Klobuchar spent much of her speech attacking Johnson, criticizing him for calling the Jan. 6, 2021 insurrection a mostly "peaceful protest." She recalled seeing police officers in the U.S. Capitol that day with cuts on their faces, bleeding. 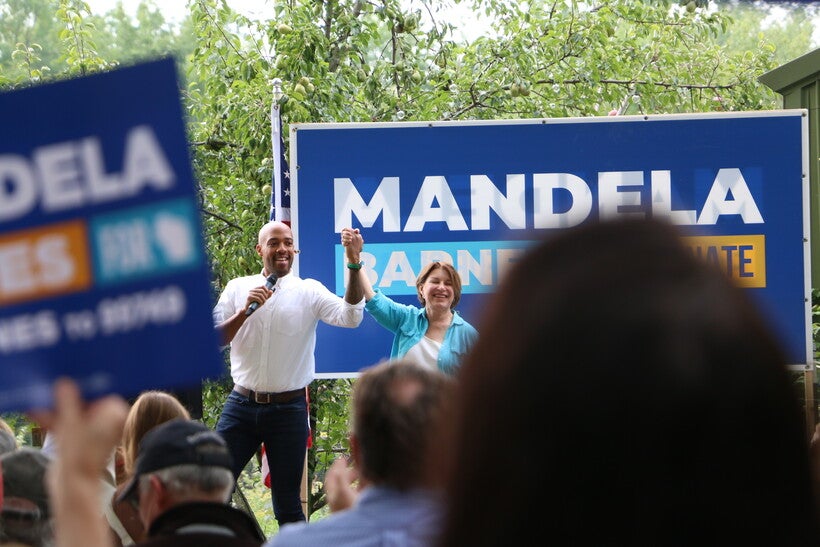 Lt. Gov. Mandela Barnes and U.S. Senator Amy Klobuchar rallied Democrats in September at a farm in Rural St. Croix County. Klobuchar spent much of her speech attacking Republican U.S. Senator Ron Johnson and encouraged attendees to tell their friends that "democracy is on the line" in Wisconsin's Senate race. Rich Kremer/WPR

"You tell your friends whether they are independents (or) moderate Republicans," Klobuchar said, "You tell them our very democracy is on the line."

Klobuchar's message hits home with Barnes' supporters at this event, like Katherine Rhoades of Menominee.

"I believe he leans left in all the right ways, but I do not think he is radical left," Rhoades said. "I think he does have the means of seeing the moderate position and the incredibly important task of uniting moderates with liberals."

Voters statewide may be a different story after Johnson and Republican groups have spent tens of millions in a TV ad blitz attacking Barnes as soft on crime.

"Lots of voters are really now just learning about Mandela Barnes for the first time," Chergosky said. "And overwhelmingly, these perceptions are being shaped by millions and millions of dollars of attack ads focused on crime, policing and public safety. And that is not how the Barnes team wants this thing to play out."

An onslaught of outside spending puts Barnes on defensive

"Mandela has been able to grow his lead over Johnson from the primary to the general election," said a campaign press release on Aug. 17. "As Wisconsinites begin to engage with the upcoming midterms, it’s clear that voters are swinging Mandela’s way."

"I think some of the early post-primary polling was too friendly to Barnes," said Jessica Taylor, who follows U.S. Senate races around the country for the Cook Political Report. "This was never going to be a seven point race or something. Wisconsin is just too close for that."

By mid-September, Barnes' lead was gone. A new Marquette survey found Johnson narrowly leading Barnes, among all voters and among independents. And in seven out of eight polls that followed, Johnson either tied or led Barnes.

Outside Republican groups have helped drive the anti-Barnes message, spending more than $29 million to attack the lieutenant governor, according to data compiled by the watchdog group Open Secrets. The largest share of that money — roughly $20 million — has come from Wisconsin Truth PAC, a pro-Johnson super PAC funded by billionaire businesswoman Diane Hendricks and GOP mega donors Richard and Elizabeth Uihlein. The National Republican Senate Committee, or NRSC, has spent another $14 million.

One of the NRSC's anti-Barnes ads used footage of the Waukesha Christmas parade tragedy, concluding with an image of Barnes next to the words "different" and "dangerous." One of the ads used a darkened image of Barnes, who would be Wisconsin's first ever African American U.S. Senator. Supporters of Barnes called the ads racist and demanded they be taken down. Johnson's campaign called the accusation "absurd." 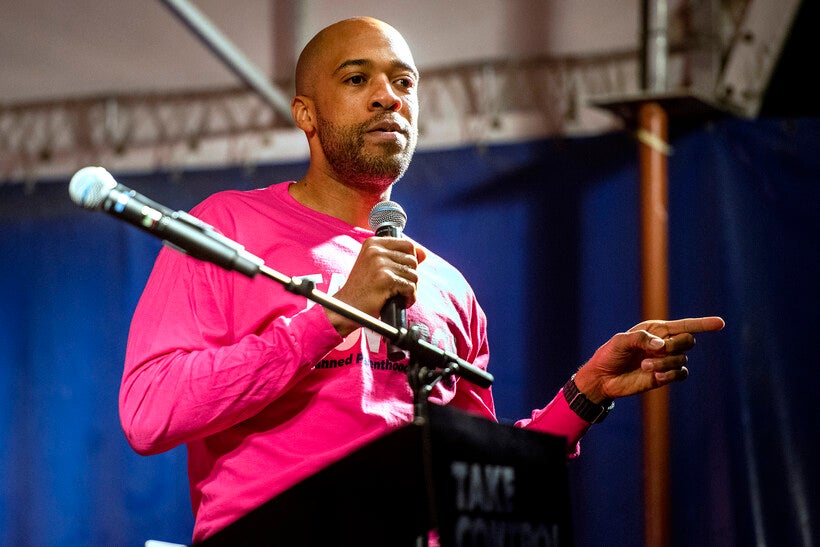 When accounting for all spending in the campaign — both positive and negative — Johnson and Republican groups have outspent Barnes and Democratic groups by roughly $20 million, according to Open Secrets data. In an interview with Wisconsin Public Radio, Democratic strategist Joe Zepecki said national Democratic donors need to take notice.

"I would urge Democrats nationally to keep their eye on the ball, focus on Wisconsin," Zepecki said. "This is a state where Democrats know how to win, and we do win fair fights. In the 11 elections statewide since Donald Trump won in 2016, the Democratic candidate or the Democratic-backed candidate has won ten of them. Ten of 11! We know how to win here, but we need the resources to do it."

Barnes' campaign has focused much of its advertising on introducing him as an average Wisconsinite from a blue-collar household who understands financial struggles, while painting Johnson as an out-of-touch millionaire favoring wealthy donors over constituents.

Barnes has pushed back against the soft-on-crime attacks with an ad of his own calling the defund the police claim "a lie."

"Look, we knew the other side would make up lies to scare you," says Barnes in the ad as he unpacks a bag of groceries. "Now, they're claiming I want to defund the police and abolish ICE. That's a lie."

Barnes has never explicitly said he wanted to defund the police, a point Johnson acknowledged when the two held their first debate. But Barnes has suggested reallocating money from "bloated" police budgets to boost social services aimed at preventing crime. Barnes also held an "Abolish ICE" shirt in a 2018 photograph, but has stressed that he was not a part of that movement.

Barnes also faced a setback when his campaign had to remove the name of a sheriff's deputy from his endorsements after he told a conservative website he'd never endorsed Barnes. The campaign also removed an endorsement from a second officer "out of an abundance of caution."

A focus on abortion rights as the campaign winds down

With less than a month to go before Election Day, Barnes and Democrats are looking to reframe the campaign against Johnson on their terms.

"I don't like being treated like a second class citizen," said Heather Heimbuch as television cameras rolled. "I don't think anybody does. And if we're seeing a particular side take rights away, it's not going to stop with this one." 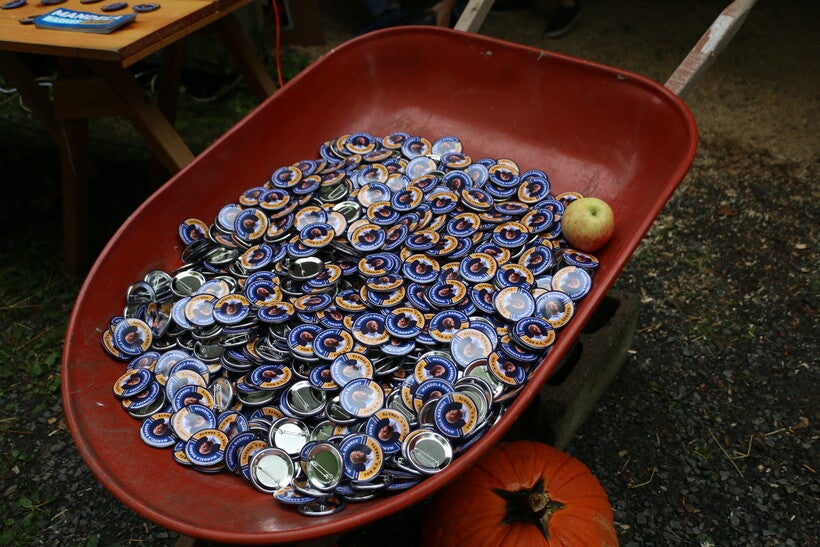 Victoria Follett gave birth to her second child three months ago. She told the group that she and her husband have good jobs and still barely get by with around $12,000 per year going to childcare.

"So, from my perspective, our society is not set up to force people to have children," Follett said. "If there's not a plan in place for how we're going to take care of these children and these families when they have their children, we are going to see more poverty, more issues, more overwhelmed foster care."

Barnes' support for restoring abortion protections isn't new, but the statewide tour, a new attack ad from his campaign and a six-figure digital ad campaign launched by Planned Parenthood Votes mark a new chapter in the race aimed at shifting focus to Johnson's record in hopes of stopping his ascent in the polls.

"The reality is Ron Johnson's position on abortion is too extreme," Barnes told reporters after the roundtable. "The reality is, Ron Johnson is just not there for us, and he is not the person to be trusted when it comes to women's health."

While polling has shown that other issues like inflation are a top concern for voters this election cycle, 63 percent of respondents to the latest Marquette survey said they opposed the Supreme Court's decision to strike down Roe.

The UW-La Crosse's Chergosky said it could provide an opening for Barnes.

"When the late deciders are making up their minds, do they look at Mandela Barnes and see someone who is weak on crime and someone who has said things in the past about public safety that make them uncomfortable?" asked Chergosky. "Or do they see Ron Johnson, someone who might be out of step with public opinion on abortion and someone who they think has just gotten off track in Washington?"

Editor's note: This story is part of WPR's series on the election. Read our profile of Republican U.S. Sen. Ron Johnson here.

Related Links:
Wisconsinites have a negative view of Sen. Ron Johnson. It may not hurt his reelection chances.