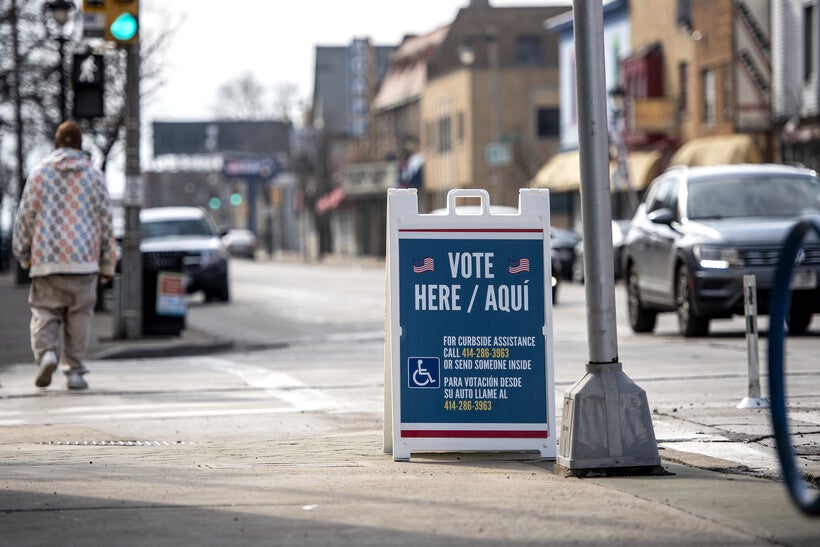 A pedestrian walks by a sign in front of a polling location on Tuesday, April 5, 2022, in Milwaukee, Wis. Angela Major/WPR

On Sunday, the Trafalgar Group released the results of a survey of Wisconsin voters conducted between Aug. 22 and Aug. 25. Barnes led Johnson 49.4 percent to 47.1 percent. Just more than 3 percent of those surveyed were undecided. Barnes' lead was within the polls' 2.9 percent margin of error.

A Fox News poll released Aug. 18 had Barnes with 50 percent of the support of likely voters and Johnson trailing with 46 percent. The Democrat's lead was just outside the survey's 3 percent margin of error.

Those results weren't far off from a Marquette University Law School poll on Aug. 17, showing Barnes beating Johnson 51 percent to 44 percent among likely midterm voters. Marquette's August survey had a margin of error of plus or minus 4.2 percent.

What it boils down to, according to University of Wisconsin-Milwaukee emeritus professor Mordecai Lee, is "we should all just agree that this is an even race."

"And if anybody wants predictions, my advice would be just flip a coin and you've got a 50/50 chance of being right," Lee said. "That's how close we should assume the race will be, regardless of the specificity of those numbers."

Lee said the value of political polling in Wisconsin has become less predictable as the state has become more "deep purple."

While Barnes quickly became a favorite among Democrats before winning the August primary, Lee said the lieutenant governor is still relatively unknown to the state as a whole.

"Now, that's what Democrats have been doing to Ron Johnson for nearly two years," said Lee.

He said residents should also expect "a new low" in terms of how negative campaign ads will be this election cycle.

In response to the August polls, a spokesperson for Barnes' campaign said the results show that "Wisconsin voters know how Ron Johnson has spent his decade-plus in office enriching himself and his wealthy donors on the backs of their hard work."

Anthony Chergosky is an associate professor of political science at UW-La Crosse. He said the August polling results from multiple sources show him "this is a very competitive race and Democrats have a compelling opportunity to unseat Ron Johnson."

"Of course, we've said that before," Chergosky said.

"In 2016, they were almost all wrong and Ron Johnson pulled off the biggest surprise in Wisconsin Political History," said the statement.

It continued, labeling Barnes as a "socialist who wants to fundamentally transform America."

In response to the August polls, a spokesperson for Barnes' campaign said in a statement that the results show that "Wisconsin voters know how Ron Johnson has spent his decade-plus in office enriching himself and his wealthy donors on the backs of their hard work."

But there are key differences this year, said Chergosky. When Johnson first ran for public office in 2010 and even during his first reelection bid, Chergosky said many voters hadn't yet formed an opinion.

"He's not in a place, in terms of his favorability and unfavorability numbers, where an incumbent senator would want to be," Chergosky said.

Now, it's Barnes who is relatively unknown among Wisconsin voters. The Marquette poll found that more voters had a favorable opinion of him than not, but 30 percent said they haven't heard enough about Barnes.

"Barnes is really going to have to execute a strong strategy of defining himself positively and pushing back against an enormous amount of negative campaigning that is already coming his way and will surely only escalate between now and Election Day," Chergosky said. "So, I think that's what I'm watching most."