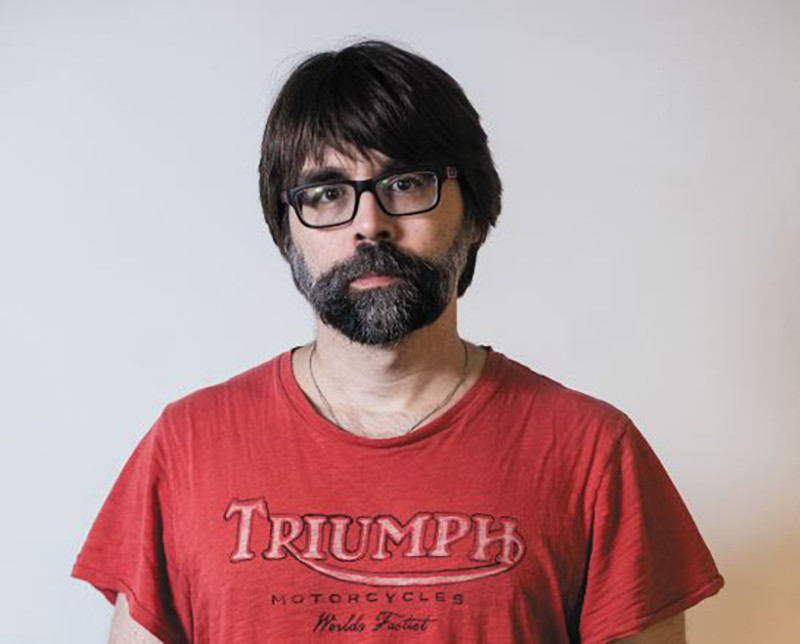 Today, Hill is the New York Times best-selling author of "The Fireman" and "NOS4A2" and the comic book series, "Locke and Key." He also has the same knack as his famous father, novelist Stephen King, for having his works adapted for television or film. AMC has turned "NOS4A2" into a series and "Locke and Key" will be featured on Netflix.

Hill's short-story collection, "Full Throttle," is no exception. Two of the stories were co-written with King and one, "In the Tall Grass," is already a Netflix horror movie.

The works of others have always been an important inspiration for Hill.

He said that one of his earliest movie memories is watching the 1971 made-for-TV movie, "Duel." It's about Charles Mann (played by Dennis Weaver) who is driving on a business trip. At a certain point, he encounters a Peterbilt 281 truck. The mysterious truck driver terrorizes Mann, repeatedly trying to destroy him and his car. The noted fantasy and science-fiction author Richard Matheson wrote the screenplay based on his short story of the same name. The film version was directed by a young Steven Spielberg.

"I loved it," Hill told WPR's "BETA." "You know, it inserted itself into my fantasy life. My dad and I would go for drives and when we were out for drives, we'd pretend the truck was after us. We'd talk it through, you know, about what we'd do and where we'd go. And, you know, imagine the truck rearing up to slam the back end of our car. And I did a lot of screaming and stuff, you know, acting my part.”

The opening story in Hill's new book is called "Throttle." And it's one of the stories he wrote with King.

Hill said he agrees with the idea that while in "Duel," the audience never learns why the truck driver is trying to destroy Mann and his car. In "Throttle," he and King have included some motivation for the truck driver's homicidal tendencies.

"Yeah, ultimately, there is a revelation. There is a reveal. We find out why the trucker is after them. That sort of goes back a little bit to (legendary horror writer) H.P. Lovecraft. He had this idea that it was important to keep the horror offscreen. You know, that what we didn't see was scarier than anything the artist could show. And I think there is some truth to that. I mean, like, certainly Spielberg in 'Jaws.' His happy discovery in the making of 'Jaws' was that the longer we went without seeing the shark, the more frightened of it we were."

"But I do think — and this is something I sort of picked up from my dad — I do think at a certain point, it's worth risking it," he said. "That the reader does deserve some revelation, some understanding of what it was all about and that maybe the monster does have to come out from under the bed. You do have to shine a light into the back of the closet to see what’s hiding there."

Hill explained what it was like to collaborate with his father, sometimes hailed as "king of horror."

"You ever see any of those ‘Roadrunner’ cartoons? So, basically, imagine Wile E. Coyote getting a box that says 'Acme' on the side. And then he pulls apart the crate and inside, there’s a rocket. And he lights the fuse and climbs on top. And the rocket blasts off after the roadrunner. And Wile E. Coyote is hanging on top, barely clinging on for dear life. I've written with my dad on two short stories and both times, I felt like Wile E. Coyote hanging on to the rocket," he said.

Since a book of short stories can't have the same kind of flow as a novel, many might be curious as to how Hill decided the running order of the stories.

"I don't how much strategy went into it, but you do look for some kind of coherent flow. You know, in a way, it's sort of like trying to put together an LP. You want one song to flow naturally into the next. I know that the first story in the book is 'Throttle' and that the second story in the book is called 'Dark Carousel.' It's set in the early 1990s. And it's about four teenagers who deface a carousel, a big, 19th century carousel. And then there are supernatural consequences. 'Dark Carousel' is almost like a cover of a Stephen King story. It's like the most Stephen King thing I've ever written."

The second story that Hill co-wrote with King is called "In the Tall Grass." This story might strike many readers as Lovecraftian cosmic horror crossed with a bit of a "Children of the Corn" vibe in terms of setting.

"I don't know what we were going for exactly. We were both in Florida. He had just finished working on something and I had just finished working on something. And we went out to the Colonial House of Pancakes at like 10 p.m. in the evening. And we're eating flapjacks or something and we both agreed we should write a story. And so we came up with something on the spot and wrote the whole thing in about six, seven days. You know, here we are a few years later and it's going to be this big Netflix film. I think the drop date is Oct. 4. And it's really scary, you know. I mean, what a great film. It was directed by Vincenzo Natali. This is horror for horror fans. It has a kind of relentlessly scary feel like 'Hereditary' or 'It Follows.' So it'll be interesting to see what people make of it."

Hill describes the story's plot as one that should be chilling.

"'In the Tall Grass' is about a brother and sister, two people traveling across country from New England to California — Becky and Cal DeMuth. They're somewhere in the heartland and they pull over at the side of the road because Becky isn't feeling too well. She's nine months pregnant. They get out and there’s this giant field at the side of the road. You know, the grass is like eight feet high. It's up over their heads. And they hear a child screaming in the field. He's screaming that he's lost and he can't find his way out. And so they both step into the grass to try to find him. And once they enter the field, they can't find their way out either," he said.

Hill said that while the movie draws from the short story, there are important differences.

"In some ways, the movie is actually a little bit more hopeful. It finds some hopeful notes that are unique to the film. And I think that that’s a good thing," he said.

He added that he keeps his readers in mind when crafting his stories.

"Not every short story can deliver hope, though. I always feel like with a novel, you know, a novel takes anywhere between 12 and 24 hours to read a whole novel. And I kind of feel like anyone who slogs along that long, deserves something at the end, some kind of uplift, some reason to feel like the world is not all terrible," he said. "I mean, they stuck with me that long, I want them to have something good at the ending. The short story works by different rules. That only takes one sitting to read. And a lot of the best short stories end with a final twist of the knife. And I do like that, I do like the ugly jolt of that final twist."