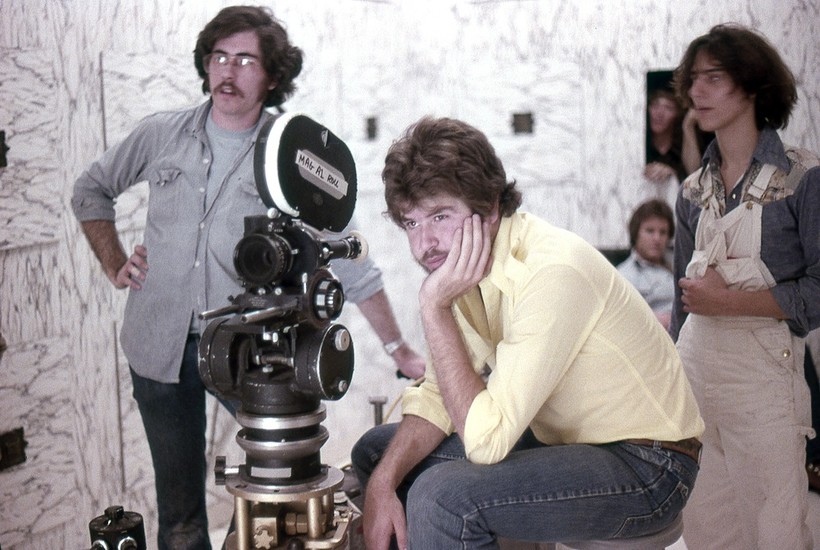 Don Coscarelli on the set of "Phantasm." Photo courtesy of Silver Sphere Corporation

The Cult Classic Is Still Scaring Film Fanatics 40 Years After Its Release
By Doug Gordon
Share:

Don Coscarelli is the youngest filmmaker ever to have a feature film distributed by a major studio. He was only 19 years old when he sold his independently-produced and critically-acclaimed drama, "Jim, the World’s Greatest," to Universal Pictures.

But it was Coscarelli's third film that put him on the map — an indie horror movie called "Phantasm." He wrote it, photographed it, directed it and edited it.

"Phantasm" was released in 1979 and has since spawned four sequels. The film is now considered a cult classic and has appeared on many critics’ lists of best horror films. Coscarelli writes in great detail about making "Phantasm" and other films like "The Beastmaster" and "Bubba Ho-Tep" in his memoir, "True Indie: Life and Death in Filmmaking."

"Somebody once told me that horror films make money," Coscarelli told WPR's "BETA." "It’s funny because today that’s absolutely the truth because some of the most successful films are the horror and genre films. But at any rate, I got this bug in my mind that maybe my next film, I needed to do something a little bit more commercial. And so I decided to try doing horror."

"Phantasm" is about a 12-year-old boy named Mike (played by Michael Baldwin), who lives with his older brother, Jody (played by Bill Thornbury). The two brothers are recent orphans. Mike is trying to come to grips with the loss of his parents and the potential loss of Jody who wants to leave.

"(Mike) has an active imagination but he just might be the sharpest knife in the drawer in that town," Coscarelli said. "And he starts to notice some strange things going on. There’s a series of murders, one of their friends is killed. There’s a funeral up at this odd mortuary cemetery complex called Morningside. And our hero, Mike, witnesses some strange things and notices this strange, very enigmatic and sinister mortician (played by Angus Scrimm). And he and his brother and their neighborhood friend Reggie who’s the ice cream vendor (played by Reggie Bannister) get involved in trying to learn what is going on up here and pretty soon, it takes some really strange, frightening turns."

Coscarelli explained that the inspiration for the story came from the way our society deals with death.

"There’s this strange practice of men dressed in dark suits and they’re in these mausoleums. And you give them the dead body of your deceased relative and it goes away into sort of a, I don’t know, experimentation or scientific operating lab. And then the corpse comes back looking kind of like your relative but not exactly ... And I thought this would be a great setting for a horror film."

Coscarelli was also inspired by a 1953 indie science-fiction movie called "Invaders from Mars." The story revolves around a boy who witnesses a flying saucer disappear into the large sand pit behind his house. Nobody believes the boy when he tells them what he saw. Coscarelli was intrigued by the idea of having a kid who saw strange things but was left on his own to try to figure out what was going on.

"And not really knowing it, but I ended up making a mashup of horror, fantasy and science fiction," Coscarelli said.

Coscarelli got the idea for the silver sphere that flies down the corridors of the Morningside funeral home from a dream he had when he was 15 years old.

"It’s maybe one of the only dreams I’ve remembered vividly enough to put into a film," he recalled. While writing the film, Coscarelli decided the orb in his dream would make an interesting storytelling device.

"That image of the sphere and the way that this sphere, you know without giving away too much, it becomes a deadly killing device ... the impact of that sequence really woke audiences up," he said. "And a lot of people never forgot it. I will be introduced to people and they go 'Oh, you did 'Phantasm,' ... I don’t know if I know that movie.' And then all I have to do is just put my hand with a couple of fingers out and go 'You know, the one with the ball like that.' And they immediately remember."

The fact that the silver sphere was inspired by a dream is very appropriate because "Phantasm" plays out like one of the weirdest nightmares you've ever had. It's surreal and dream-like. One could say it's very similar to David Lynch's first feature film, "Eraserhead," in that way.

Coscarelli said when he made the film, he was willing to take risks in telling a "story in a different kind of style."

"I was a little younger, a little more confident possibly like the young are ... and as I was making the movie, I started to not worry so much about whether the audience was comprehending what I was doing exactly. And that’s a risky thing to do," he said. "Thank God, it worked out. But I do think that by having it grounded with some real elemental scares throughout, it kept audiences’ attention."

Forty years after its original release, "Phantasm" continues to have a devoted following. Coscarelli thinks there are a few reasons why the movie has struck a chord with so many people. One is the passion of horror fans and another is that the basic theme of what happens when you die is a universal question we all think about. Another is the strong family bond between the orphaned brothers.

Coscarelli says there's one other element to "Phantasm's" staying power that he's discovered in recent years while meeting men in their 30s, 40s and 50s.

"They always tell me 'You know, when I saw that movie, I just never forgot it because there was that kid and he was shooting a shotgun, he was driving his brother’s car, he was fighting the undead.' In a weird way, and not by any design, I created this teen male empowerment movie.'"