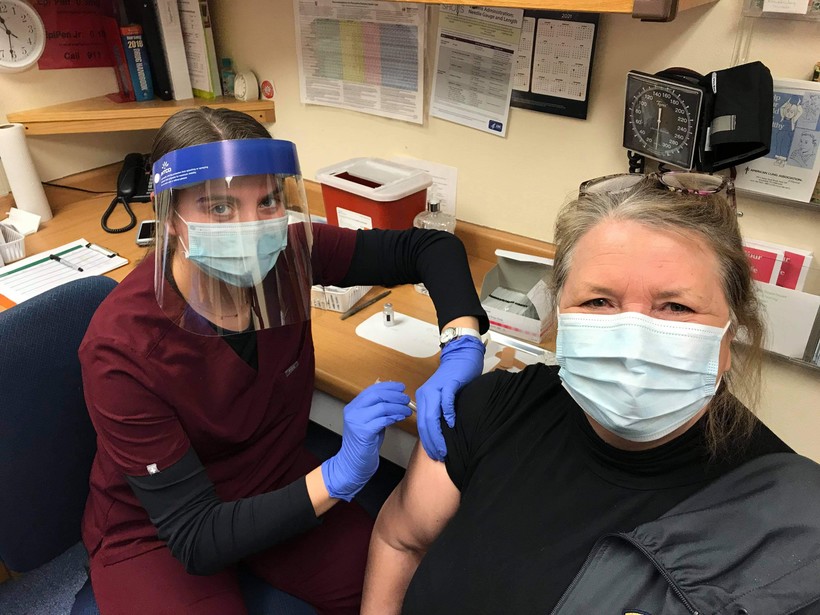 Rural Areas Faced Shortage Of Health Care Resources Prior To The Pandemic
By Danielle Kaeding
Share:

Nurse practitioner Rebecca Fleming didn’t feel the shot when she received the COVID-19 vaccine on Jan. 14 at the NorthLakes Community Clinic in downtown Ashland.

"That was definitely better than a flu shot," said Fleming.

Fleming is one of around 200 health care workers for NorthLakes who has received the Moderna vaccine across 14 clinics in rural northern Wisconsin. NorthLakes has been lucky to get all the doses it has requested so far, according to CEO Reba Rice. But she acknowledged the rollout has been anything but smooth for health officials and providers in Wisconsin.

"Everybody is very anxious to work together to make sure that people stay safe throughout this whole thing, get testing and get treatment and get vaccines," said Rice. "But the lack of coordination has really been a problem, and we did have a summer to think about it. But I just think this gobsmacked everybody." 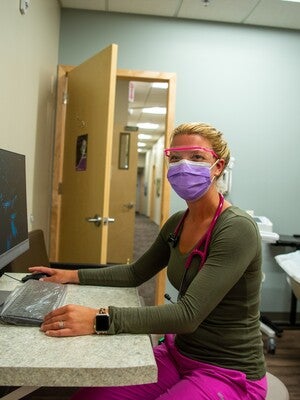 The vaccine rollout has been challenging everywhere. But rural Wisconsin faces additional complications. Rural public health officials and providers have limited resources, staffing and storage compared to large urban health systems. And sparse populations in rural areas can make transportation to and from vaccination sites challenging for older populations with limited public transit options or those who live far from the nearest provider.

Rural public health officials say receiving the vaccine is like a light at the end of the tunnel. Even so, Bayfield County Health Director Sara Wartman is worried about burnout among her 13 staff. She and her nurses have put in long hours to administer doses of the Pfizer vaccine, which requires ultra-cold storage, to health care workers and first responders while the vaccine is still effective.

"While we have a lot of hope and inspiration right now, it kind of was like this when COVID first happened," Wartman said. "My staff were really resilient and gung-ho — lots of energy. But, when we realized it wasn’t going to be over in two months, it was really hard to keep going, to keep that energy level up."

One benefit of vaccinating in rural areas is that some health departments and providers have been able to vaccinate all eligible health care workers, seeking more flexibility in administering doses to avoid wasting the vaccine. The state recently expanded vaccination to those 65 and older after some providers reported they had more capacity.

Rural areas were already facing a shortage of resources and primary care physicians before the pandemic. A 2018 report found nearly one-fifth of the state’s population resides in rural communities, but less than 10 percent of physicians practice in rural areas. While state health spending has increased in recent years, Wisconsin ranks near the bottom among states in terms of state support for public health.

In rural Menominee and Shawano counties, the health department hasn’t ordered any doses of the vaccine, according to health officer Terri Harmala. With just two nurses, Harmala said they don’t have the staff or resources to oversee vaccination since they’ve already been overwhelmed with contact tracing and testing for COVID-19.

"I don't want to overpromise and not be able to deliver that, so I'm cautious in saying that we will have it right now," said Harmala.

Harmala is looking to hire another nurse and partnering with larger health care systems like ThedaCare to connect people to the vaccine in the area. The Menominee Tribal Clinic has received doses to vaccinate tribal health workers and elders, but Harmala said she needs more support to administer the vaccine.

The state has been distributing vaccine to hospitals, providers, pharmacies and health departments who have signed up to administer doses. But some rural health officials like Harmala don’t have the resources to coordinate vaccination.

Sawyer County Public Health put out a request last week for more staff and volunteers to help scale up vaccination in the county of roughly 16,000 when more doses become available. Julie Lyons, health officer for Sawyer County, said they’re looking for nurses, doctors and people to assist with registration.

"We need everyone in our community to come together to get this done," said Lyons in a statement. 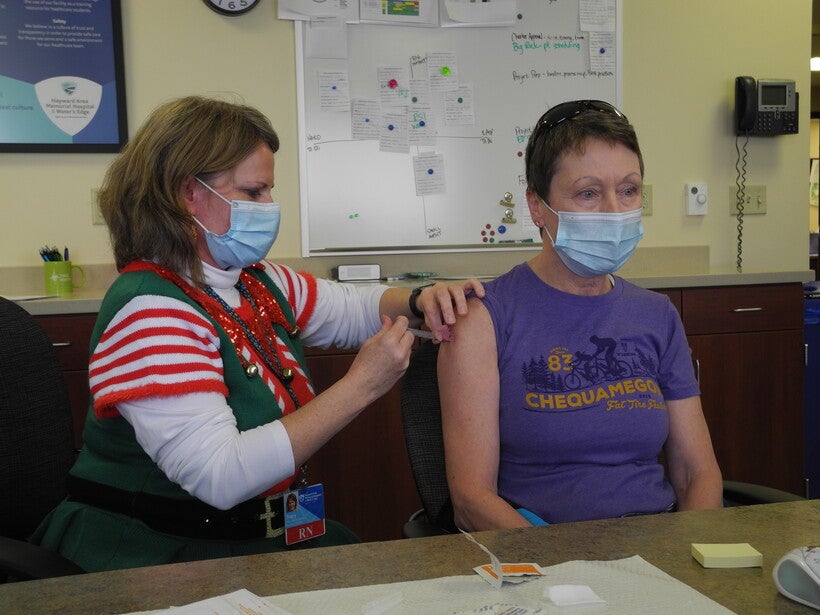 Hayward Area Memorial Hospital has around 110 staff who work directly with COVID-19 patients at its 25-bed facility. CEO Luke Beirl said the vaccine should alleviate staffing shortages they’ve experienced from exposure to the virus. But they’ve been careful to avoid vaccinating all who have direct contact with patients at the same time. The Centers for Disease Control and Prevention has advised providers to consider staggering doses among health care workers or planning for staff to take time away from work due to common side effects like fever, chills and fatigue.

"If half of those folks become ill from the vaccine, or don't feel good, we created our own staffing shortage," said Beirl.

Some rural health advocates feel rural hospitals, providers and health departments have been asked to take on too much. John Eich, director of the Wisconsin Office of Rural Health, said departments have already spent nearly a year under intense public pressure.

"They’re stressed after nine months of this," said Eich. "They’re stretched really thin with contact tracing ... It felt like an unfair burden to add on top of the tremendous work that those health care providers are already doing."

Eich added that rural health officials are also contending with transportation barriers to get the vaccine to those who need it. People in large stretches of rural northern Wisconsin often live long distances from the closest hospital or have limited options for public transit. Wartman has identified a dozen sites in Bayfield County where they plan to administer the vaccine to residents to overcome those obstacles.

"Most people have to travel between 30 minutes and an hour to go to a medical appointment outside of the NorthLakes (service) area," said Wartman. 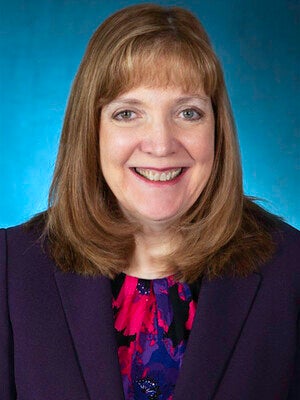 "We'll be providing resources to them for their own vaccination, and also our mobile vaccination teams to provide increased access, just as we've done with community testing for the pandemic," said Willems Van Dijk.

On Jan. 15, the state announced it would deploy nine mobile vaccination teams to help local and tribal health departments who are unable to provide those services. State health officials have also announced $86 million in funding for tribal and local health departments to support immunization, including hiring additional staff. Willems Van Dijk said they’re also looking at which pharmacies may be most helpful for distributing the vaccine.

But some rural Wisconsin counties, including Bayfield County, lack pharmacy chains like CVS and Walgreens that have helped vaccinate nursing home residents as part of a federal partnership with the CDC. Wisconsin has 15 counties with retail pharmacies that aren’t part of the federal partnership, according to a review by the RUPRI Center for Health Policy Analysis at the University of Iowa. The analysis also found five counties in the state have just one retail pharmacy and four counties lack a pharmacy capable of vaccinating the public. Florence County is one of 110 rural counties nationwide that has no pharmacy.

"They hope to get vaccine down the road and be able to vaccinate the public," said Wick.

Wisconsin has more than 1,200 vaccinators that have been enrolled to administer doses across Wisconsin. In a Jan. 14 hearing before lawmakers, Danielle Womack with the Pharmacy Society of Wisconsin said hundreds of pharmacies that aren't a large chain like Walgreens had yet to receive the vaccine from the state.

Willems Van Dijk said they’re working to ensure they have as many outlets as possible to help vaccinate the public.

Since mid-December, the state has administered about 347,961 doses of the vaccine. Wisconsin’s vaccination rate has lagged behind neighboring states like Minnesota, Michigan and Illinois, prompting criticism from Republican lawmakers and concerns among health care groups.

State health officials have said the supply of the vaccine from the federal government hasn’t kept pace with demand. Gov. Tony Evers and his administration have called on federal officials to increase the amount of doses the state receives and provide better forecasts of allocations for planning.

Tim Size, executive director for the Wisconsin Rural Health Cooperative, recognizes the state is working hard to address challenges with the rollout due to short supply and confusion from the federal government.

"What you'll hear frequently is people will say that we're designing the plane as we’re flying it," Size said. "That's what sometimes happens in emergencies, but it's not ideal."

Rice with NorthLakes said it'll be interesting to pinpoint problems that impacted the vaccine’s rollout, but she said now is not the time for blame.

"Now is the time to just roll up your sleeves and get people healthy," said Rice.

Correction: This story initially reported a number of vaccines administered in Wisconsin that was out of date. The number was corrected to 347,961 as of Monday, Jan. 25. WPR regrets this error.