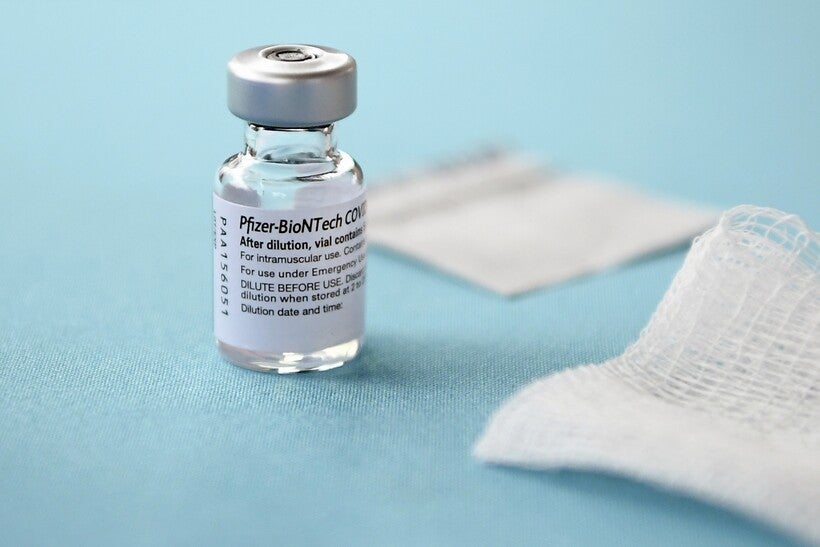 This Monday, Dec. 14, 2020 photo, shows a vial of the Pfizer-BioNTech vaccine for COVID-19 at Hartford Hospital in Hartford, Conn. New research suggests that Pfizer's COVID-19 vaccine can protect against a mutation found in two contagious variants of the coronavirus that erupted in Britain and South Africa. Jessica Hill/AP Photos

Adults age 65 and older will be eligible for the coronavirus vaccine beginning Monday, the state Department of Health Services announced Tuesday.

But state officials warn it will likely take two months before everyone in the age group is able to receive the vaccine.

There are about 700,000 Wisconsin residents who are 65 and older, according to DHS. That's 10 times the number of first-dose vaccines the state receives each week.

"It is going to take some time," said Julie Willems Van Dijk, DHS deputy secretary. "Not because the people aren’t there to vaccinate, it’s because there isn’t going to be vaccine in everybody's hands right away."

Willems Van Dijk said people can expect to receive the vaccine wherever they would get a flu shot, either from a health care provider, a pharmacy or a local health department clinic. But she said people should not overwhelm these places with phone calls to sign up. She suggested checking the provider's website for sign up information or waiting to be contacted.

"We know a number of health systems are reaching out to their patients over age 65 and saying, 'We've got a system in place. We've only got so much vaccine. We're going to reach out to people and say it’s available for you,'" Willems Van Dijk said.

Since the vaccine became available in Wisconsin, inoculation has been prioritized for frontline health care workers, staff and residents in nursing homes and assisted living facilities, and more recently, police and firefighters.

Last week, the Trump administration urged states to expand vaccine eligibility to adults 65 and older. Meanwhile, the State Disaster Medical Advisory Committee (SDMAC) has been discussing who will be eligible for the vaccine in the next phase, 1b, in Wisconsin.

Willems Van Dijk said DHS decided to move forward with the new age group ahead of that announcement because health care providers were reporting they had capacity to start the next phase.

"I don't think there was any question that older adults were going to be included in phase 1b ... This is the population that has suffered the most from this disease, that has been disproportionately affected by death from this disease," Willems Van Dijk said. "We know providers have some vaccine on the shelves. We want to get that vaccine into arms, and we want to be protecting this population."

Sarah Sorum, CEO of the Pharmacy Society of Wisconsin, applauded the announcement in the DHS press release.

"Pharmacies are ready to vaccinate this population and other eligible populations, and we look forward to continuing our collaboration with DHS and local public health to ensure our most vulnerable Wisconsinites receive the vaccine," Sorum wrote.

Those currently giving vaccinations will be able to begin giving shots to older adults prior to Monday if they've finished vaccinating those in phase 1a, DHS said in Tuesday's announcement.

Beyond those 65 and older, a draft of recommendations for the phase 1b vaccinations in Wisconsin includes prisoners, police, firefighters, teachers, child care professionals and mink farmers.

Wisconsin Grocers Association President and CEO Brandon Scholz told WPR that differs from federal recommendations put out by the U.S. Centers for Disease Control and Prevention.

The CDC recommends the next phase of vaccinations go to "frontline essential workers," which include grocery store workers, employees in manufacturing and public transit workers. Those categories are not included in Wisconsin's recommendations.

"We were caught completely, 100 percent off guard that they even went to this place," said Scholz. "I mean, when I first heard about it, I was incredulous. It was like, 'What? No, that's a mistake.' And then it was like, 'No, it's not a mistake. And nobody called us.'"

Scholz said grocery store owners had already told employees they would be eligible to get vaccines after frontline health care workers, based on CDC recommendations. He said grocery store employees interact with tens of thousands of people each week and not immunizing them will slow the state's response to COVID-19.

Willems Van Dijk was asked Tuesday why grocers aren't included in phase 1b recommendations. She responded by saying the state's recommendations are not yet final.

"The state has not made a decision about phase 1b, that decision is still before our State Disaster Medical Advisory Committee," said Willems Van Dijk. "And they are reviewing public comment that has been made and will be making final recommendations to us later this week."

A meeting of the vaccine advisory committee is scheduled for 7 a.m., Wednesday.