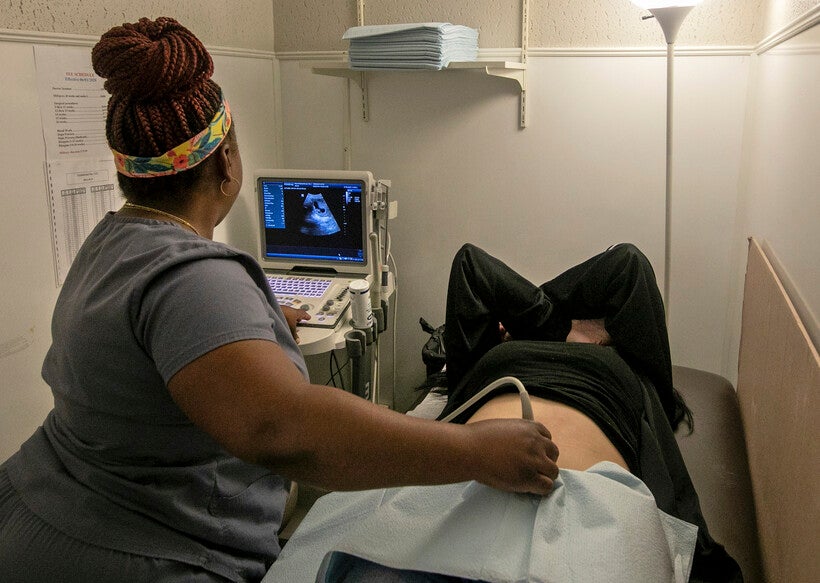 An operating room technician performs an ultrasound on a patient at Hope Medical Group for Women in Shreveport, La., Wednesday, July 6, 2022. Abortion clinics in Louisiana can continue operating until a lawsuit challenging the state’s near total ban on abortions is resolved, a state judge ruled Thursday, July 21, 2022. Ted Jackson/AP Photo

In Wisconsin, what are my options if genetic testing shows the fetus isn't viable?

State abortion ban means abortions can only be performed when the patient's life is at risk
By Andrea Anderson
Share:

In the wake of the U.S. Supreme Court overturning federal protections for abortion and Wisconsin’s ban on nearly all abortions going into effect, some people have wondered what implications that has on genetic testing.

Specifically, people reached out to Wisconsin Public Radio’s WHYsconsin asking what options pregnant people now have when genetic testing shows abnormalities in a fetus, including those that would not allow a child to survive outside the womb.

One Wisconsin woman was nine weeks pregnant when she reached out and asked about this. WHYsconsin is not using her name because she is afraid she will be shamed or criminalized for asking these questions.

"I am currently 9 weeks pregnant with a very-much wanted child," she wrote. "Because I’ll be 35 at the time I give birth, at the advice of my physician I’ll be undergoing genetic testing to make sure the baby is healthy and viable. If I find out it isn’t, what are my options? Would I be forced to wait until my life is at risk before abortion would be considered an option?"

In the United States, it is common for providers to offer and discuss genetic testing as part of prenatal care, according to medical professionals interviewed by WPR. Some screening can be done pre-conception, when people are considering having a child. During a pregnancy, tests done during the first and second trimester provide information about the fetus, including if the fetus could be born with certain genetic disorders and if the fetus is incompatible with life, meaning the baby will not survive outside the womb.

The Wisconsin mother, who also has a 2-year-old, and her husband are thrilled to be having another child, but not knowing how the recent legal changes impact her pregnancy is causing her concern.

"I'm so excited to have another baby," she said in a follow-up interview. "But I'm just scared that if something were to happen to our baby, what our options would be. If it's not viable, if there's just crazy birth defects or things that would make it incompatible with life, would I be forced to carry the baby to term? Or if something happened, maybe not necessarily a miscarriage, but if there's no heartbeat, would I be forced, again, to wait until my life is at risk before there would be any medical intervention available for me here now?"

"These tests aren't really affected," said Dr. James Linn, an OB-GYN with Ascension Wisconsin in Milwaukee and member of American Association of Pro-Life OB-GYNs. He said he has not heard of anyone questioning the legality of genetic testing and said he does not think providers have stopped offering or discussing genetic testing since the state ban took place.

The law's "intent is to not allow abortion of any unborn child," he said.

The 1849 ban makes abortion illegal in Wisconsin unless a pregnant person’s life is in danger. That means any genetic disorders found in a fetus through genetic testing aren’t legal cause for an abortion in Wisconsin. If someone wants to terminate a pregnancy, they have to go to a state where it’s legal or wait until a medical emergency requires the procedure to save a patient's life, said Dr. Wendy Molaska, president of the Wisconsin Medical Society.

That is UW Health's understanding as well.

"In the absence of any maternal illness, genetic abnormalities in the fetus — including those that would not allow the fetus to survive outside the womb — do not constitute a life-threatening condition for the mother," Dr. Lisa Barroilhet, interim chair of the Department of Obstetrics and Gynecology, University of Wisconsin School of Medicine and Public Health, said in a written statement. "Because the abortion is not being performed to save of the life of the mother, it would not be legal in Wisconsin per the 1849 statute."

Across the country, providers are trying to make sense of laws that have exceptions like this, exceptions that some feel aren't well defined.

Molaska has been practicing family medicine for more than 20 years in Wisconsin. She runs her own practice, Dedicated Family Care, in Fitchburg.

As a physician who has worked as an OB-GYN in rural areas, Molaska has seen patients grapple with the news that their child will be born with serious birth defects, such as anencephaly, when a baby is born without parts of the brain or skull, or trisomy 18, when a baby faces heart defects and infections that can lead to death.

"I think what this really comes down to is the conversation should be a conversation between a (patient) and her provider," Molaska said. "…I believe that the physician should be able to talk to their patient about what all of the options are ... all of the evidence that we have available and then the patient and her family get to make that decision as to what their values are and what they see as what they want to do."

Since reaching out, the mother from Wisconsin has completed first trimester genetic testing. Her husband is adopted, and they don’t know much about the medical history of his birth parents, so they decided to do genetic testing during both pregnancies.

Family history and wanting to know if the child could have any genetic abnormalities are common reasons for the testing and can help in making decisions, said Dr. Kara Goldman, a professor of obstetrics and gynecology at Northwestern University.

"I think it's important to know that a lot of people screen because they want to be able to prepare for whatever it is that's going to happen to their family," Goldman said. "And so if it is going to be a chromosomally abnormal pregnancy, patients may decide, 'This is important for me to know so that I can prepare our family members, so we can have resources, so we can go to the right doctors.' So it's really not just about using the information to terminate, but it's really important to have that information, so patients have that choice."

Another reason genetic testing is done is to help determine what resources and help parents and families may need for the birth, the child and the family unit, said Linn and Goldman.

"These are optional tests that some parents want so that they can have an opportunity to prepare for the birth of a child who may have some abnormality," Linn said. "Sometimes they have had a previous child with a problem and they just want to know how to prepare for the next baby. Or they want to have their mind put at ease that there's nothing to suspect another abnormality. So it's sometimes just to prepare for getting everything ready, getting their household ready and making plans for the new baby. Another reason is just to alleviate anxiety."

If a provider performs an illegal abortion in Wisconsin, they could face a felony. Patients do not face prosecution. Wisconsin Attorney General Josh Kaul has said he does not plan to enforce the 1849 ban, though local law enforcement could. Gov. Tony Evers said he would grant clemency to those prosecuted under the ban. The statute of limitations is longer than Kaul's and Evers' term.