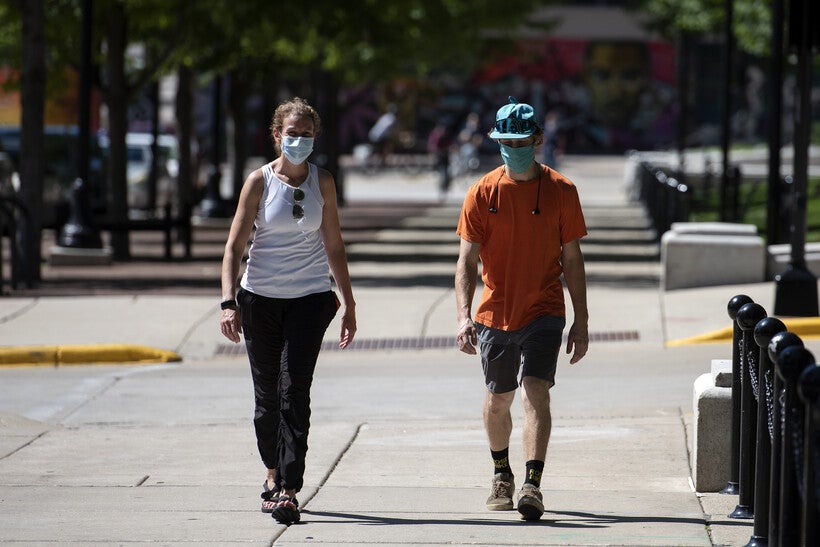 Gov. Tony Evers has issued a new statewide mask mandate in Wisconsin, citing an increase in COVID-19 cases across the state.

"We continue to learn more about this virus, but what we do know is that we are facing a new and dangerous phase of the COVID-19 pandemic here in Wisconsin," Evers said in a prepared statement. "We are seeing an alarming increase in cases across our state, especially on campus."

Wisconsin set two new records for daily confirmed cases of COVID-19 last week, on Thursday and Friday. The state has now surpassed 100,000 cases. According to state Department of Health Services data, there has been a sharp increase in the number of 18-to-24 year-olds diagnosed with the virus since mid-August. Clusters of cases on college campuses have spurred several University of Wisconsin System schools to shift to virtual learning and impose dorm quarantines.

UW System interim President Tommy Thompson argued on Tuesday, after Evers' new order was issued, that high case numbers on campuses could be chalked up to large-scale testing.

"Because of our robust testing program, we expected to identify cases, and we are effectively managing situations as they arise," Thompson said in a prepared statement. "We have been working to create a culture of responsibility among our students, including a mandate to wear masks, while pursuing more aggressive actions as necessary."

Last week, Thompson told WPR the UW System was behind its goals for weekly testing on campuses, in part because of inconsistent supply shipments from the company that makes the tests and an attempted diversion of equipment away from the system by the federal government.

The governor's new mandate mirrors requirements in the previous mask order. It will require people 5 years old and older to wear masks in indoor or "enclosed" public places when people who don't live with them are present. There are exemptions for certain activities, like eating, drinking and swimming.

The new order has the same $200 penalty for noncompliance as the previous mandate.

The previous mask mandate, which was issued in July, highlighted political divisions across Wisconsin, with the GOP-controlled state Senate saying it was ready to override the order and a number of county law enforcement officials saying they would not enforce it.

On Tuesday, Senate Majority Leader Scott Fitzgerald, R-Juneau, called the new mandate "not valid" and "not worth the paper it’s printed on," but stopped short of saying an override vote was coming.

"Wisconsin’s lawless governor continues to rule by fiat and it must end," Vos said. "No one branch of government can rule outside the letter of the law and go unchecked, even during a pandemic."

The public health emergency declaration that made the previous mask order possible has been challenged in court.

After the new emergency declaration and mandate were announced Tuesday, the head of the conservative group that brought the lawsuit said "letting this gross abuse of power stand is not an option."

"Governor Evers and his team believe the presence of COVID-19 supersedes the rule of law and our state constitution," said Rick Esenberg, president of the Wisconsin Institute for Law and Liberty, in a tweet. "They are wrong."

A spokesperson for WILL said the group's attorneys "are reviewing the current order and need to discuss the matter with our clients before any decisions are made."

"As we see a surge in cases, continuing the mask mandate will help us get through the next two months," Hintz said in a tweet.