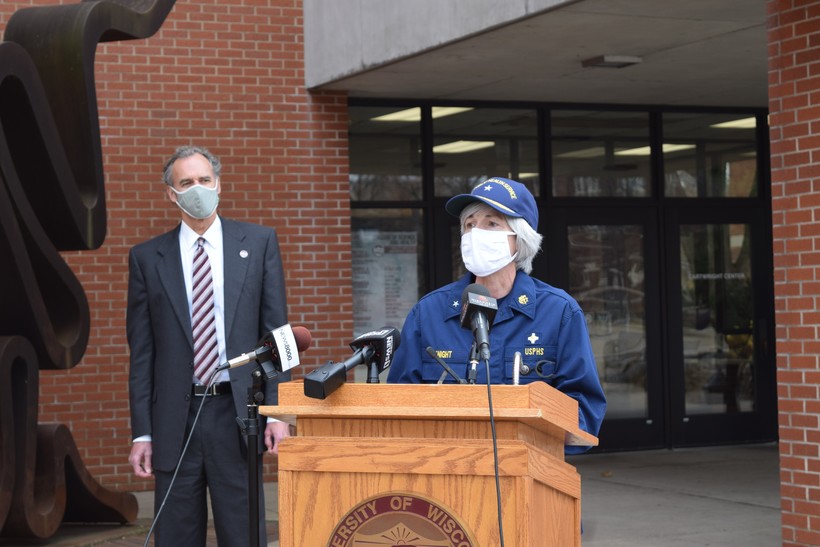 Rear Admiral Nancy Knight, director of the Global Health Protection at the U.S. Centers for Disease Control and Prevention, urged Wisconsin residents to use new "surge testing" sites at University of Wisconsin campuses during a visit to UW-La Crosse on Thursday, Nov. 12, 2020. Hope Kirwan/WPR

An official from the U.S. Centers for Disease Control and Prevention says Wisconsin is third in the nation for the number of COVID-19 cases by population.

Rear Admiral Nancy Knight is director of the CDC's Division of Global Health Protection and has been working with the University of Wisconsin System to set up new surge testing sites at campuses.

The project was announced last week as part of an effort by the U.S. Department of Health and Human Services to provide free community-wide testing.

During a Thursday visit to UW-La Crosse, Knight said cases and deaths are rising at a significant rate in Wisconsin.

Knight said the success of the new surge testing sites will depend on whether Wisconsin residents use them. She urged people to get a test whether or not they have symptoms and to continue to follow health precautions like wearing a mask, hand washing and social distancing.

"We need to be mindful of that in every situation," Knight said. "As you come into contact and you go back to getting comfortable without a mask with other individuals that aren't part of your normal household, that's when we see outbreaks occurring."

"We wanted to reach out and test the community as well as K-12, the vocational schools, the community at large, because we want to see if we can drive down the spike that’s going through our state right now," Thompson said.

After Gov. Tony Evers called on Wisconsin residents to stay at home during a statewide address this week, Thompson said leadership at each of the UW campuses are re-evaluating whether to continue in-person classes after Thanksgiving break.

"When you see the breakout of this insidious disease, over 7,000 (new cases per day)… the hospital system is really taxed, and then of course the health workers. And so we want to do our part," Thompson said.

Thompson said only campuses in Green Bay, La Crosse, Milwaukee and Oshkosh are currently planning to continue in-person classes after the break.

UW-La Crosse Chancellor Joe Gow said he would be discussing whether to transition to online classes with campus leadership this week.