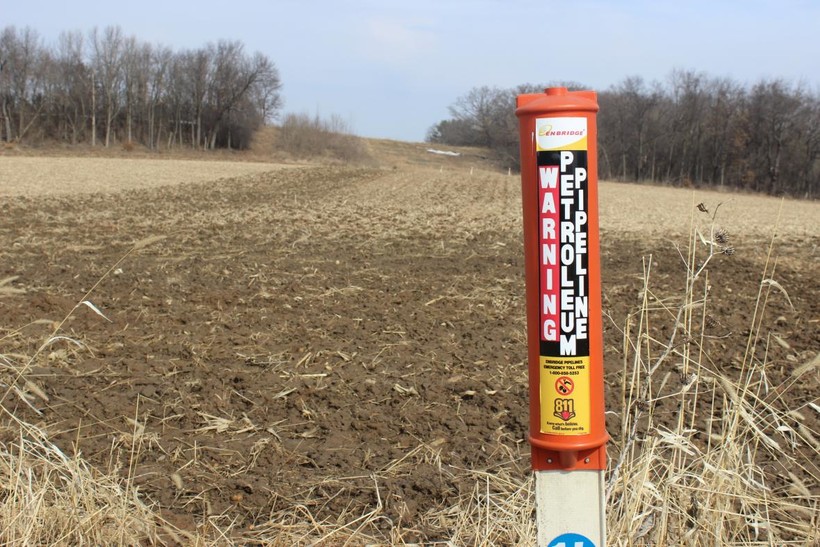 Canadian firm Enbridge Energy waited more than a year to notify state environmental regulators of a spill of a petroleum substance stemming from one of its pipelines in Fort Atkinson. Now, community members near the site of the release want answers, and the regulators are determining whether to take enforcement action against the company.

An alarm first alerted Enbridge Energy of a release on its Line 13 pipeline on April 26, 2019, near Blackhawk Island Road. Several weeks later, Enbridge staff identified the leak was coming from a valve fitting and made permanent repairs by June 2 of that year. But, it was on July 31, 2020 — more than a year later — that Enbridge reported the leak to the Wisconsin Department of Natural Resources.

Now, the DNR is investigating the matter and is working with the company to figure out why there was a reporting delay, said Steve Martin, south central region team supervisor for the DNR’s remediation and redevelopment program.

"Their initial notification to us indicated a release of less than two gallons, and they indicated they were under the impression there was a five-gallon threshold. That may be part of the problem," said Martin. "But, we’re exploring that further with them to figure out why there was such a delay in the reporting."

Under the state spills law, Martin said any release regardless of the amount must be reported immediately to the agency. He said DNR staff are discussing whether to pursue enforcement action against the company and what steps might be taken.

Federal law requires reporting of any discharge that's considered harmful to water quality rather than relying on an amount of oil discharged. However, nearby Minnesota does not require reporting petroleum discharges of five gallons or less.

An interim site investigation report filed with the DNR found up to 1,386 gallons of diluent liquids were released. Diluent is a light petroleum substance used to thin out oil that’s carried through Enbridge’s pipelines. Enbridge spokesperson Juli Kellner said in a statement Tuesday that the delay was initially due to winter weather conditions as they investigated the release and then COVID-19 shutdowns contributed as well.

"Based on the initial findings, Enbridge calculated the release volume to be 1.35 gallons. After completing several excavation attempts to remove impacted soil it became clear that soil impacts still remained in the ground beneath the release site," said Kellner. "It wasn’t until the first phase of site investigation activities were completed in 2020 that we had enough data to analyze and re-calculate the revised volume out estimate."

Enbridge conducted 27 soil borings and temporary monitoring wells as part of the investigation, which prompted the company to install eight permanent wells. Their findings showed benzene concentrations in groundwater samples near the site went beyond the state’s enforcement standard in an area extending from beneath the source to roughly 225 feet to the southeast.

The plume appears to still be moving slowly — less than a foot per day — toward the Rock River, which is roughly a half-mile away. Homes and farm buildings are also located within 1,200 feet of the site, but Martin said they're not in the path of the plume. He noted the company sampled the closest private well and found no evidence of volatile organic compounds. The agency is directing Enbridge to sample around 10 private wells within that 1,200-foot radius.

"At this point in time, it doesn't appear that anyone's drinking water wells have been impacted by this release, and, based on the preliminary information we have, we don't anticipate there will be impacts," said Martin. "But, we're taking the necessary steps to do testing to ensure that there is not going to be a problem."

The company has removed around 250 cubic yards of soil near the pipeline that were impacted by the spill. The DNR is asking Enbridge to install four more monitoring wells that would go deeper into the aquifer and evaluate whether the plume is moving downward. Martin said they’ve asked the company to prepare a work plan within the next 60 days to do that work and additional soil investigation.

The spill has prompted concerns from nearby landowners who only recently learned of the release, including Victoria Hachtel, who lives in the township of Koshkonong.

"Two years they had it — (we) didn’t know about it," said Hachtel of Enbridge’s knowledge of the spill.

She said Enbridge staff only recently came to her house to visit after news of the spill surfaced, but she declined to comment further.

Brandon White, a Jefferson County Board member, recently heard from Hachtel and other landowners at a committee meeting where Enbridge updated officials on the release.

"A lot of people were very understandably upset and concerned of the potential risks of harm this caused to their drinking water in the area, land quality, all of these things that they really should have been aware of when it happened, so they could have taken the measures to protect themselves against it," said White.

White said county officials will likely discuss what options may be available to them to require better communication by Enbridge with residents. He hopes the company is taking steps to guard against future spills.

Enbridge said groundwater monitoring is ongoing at the site, adding "the safety of local residents and the environment is our main focus."

This is not the first time the company has been called into question for failing to swiftly address issues on its pipelines.

In 2010, Enbridge didn’t respond to a release from its 6B pipeline in Michigan for 17 hours, sending at least 843,000 gallons of oil into Talmadge Creek and the Kalamazoo River. The spill cost the company at least $1.2 billion to clean up and resulted in a $177 million settlement with the U.S. Department of Justice and the Environmental Protection Agency.

The EPA also fined Enbridge $6.7 million last year for failing to swiftly address cracks and corrosion through digs on its pipelines as part of a 2017 consent decree stemming from oil spills in 2010.

The company is facing scrutiny of its pipeline projects which have drawn opposition from tribal and environmental groups in Minnesota and Wisconsin.

The company is currently seeking permits to reroute its Line 5 pipeline south of the Bad River Reservation after the tribe filed a federal lawsuit to shut down the pipeline on its lands in 2019. Supporters of the project say it will bring hundreds of jobs to the region while opponents say the project threatens the climate and the region’s water-rich landscape.