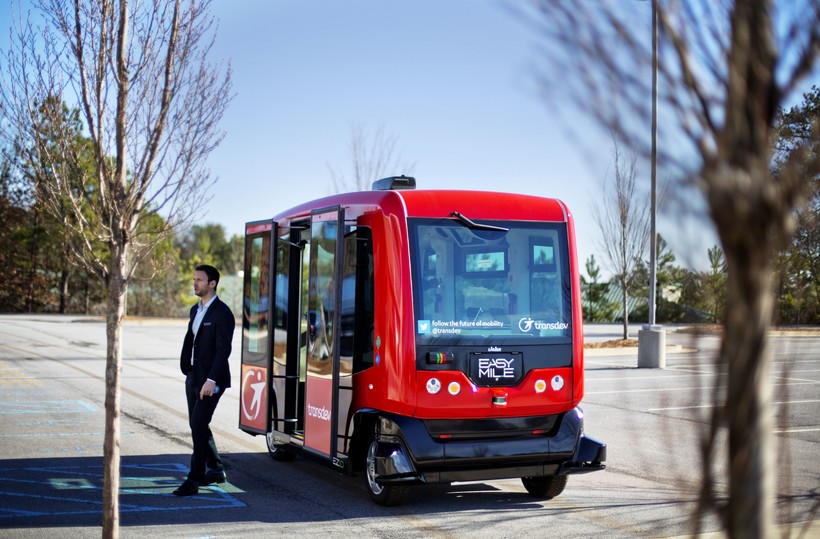 A passenger gets off a driverless shuttle bus on display at the Riverside EpiCenter in Austell, Ga., Thursday, Jan. 26, 2017. David Goldman/AP Photo

Wisconsin continues to prepare for self-driving vehicles, with officials acknowledging potential benefits such as improved safety while pointing out pitfalls of unintended consequences.

"It will change our lives perhaps as dramatically as the rise of digital technology and the internet," said Wisconsin Department of Transportation Secretary Craig Thompson at the first meeting of the Wisconsin Automated Vehicle External Advisory Committee on Sept. 8. "Social media became such a dominant source in our society overnight with little preparation for the consequences."

Autonomous vehicle technology is expected to be more widely available in a decade if not sooner, with far-reaching ramifications, particularly for public transit. That's according to a 2019 report issued by the Wisconsin Traffic Operations and Safety Laboratory, which is located on the UW-Madison campus.

Three years ago, UW-Madison was named one of 10 national testing sites for such vehicles.

Some cities, like Grand Rapids, Michigan, have begun a fully automated transit shuttle pilot program, with a driver on board just in case. The groundwork is being laid for a similar demonstration project in Madison that would use a 15-passenger automated electric shuttle bus in the downtown corridor along East Washington Avenue.

The Wisconsin Automated Vehicle External Advisory Committee — made up of academic researchers, local government officials, and law enforcement — discussed the importance of not letting the technology get ahead of public acceptance at the Sept. 8 meeting.

"Personally, I’m thrilled with the technology on some existing vehicles that are out there today and what the future holds for us," said advisory committee member Iowa County Sheriff Steven Michek. "But also, I speak for my fellow sheriffs about being concerned about accountability and who is held responsible for what when things go wrong."

The TOPS lab conducted a survey last year of attitudes toward self-driving vehicles in Eau Claire that could potentially be considered as part of a transit system in the future.

More than three-quarters of respondents were hesitant about riding a fully automated transit vehicle without a human operator.

According to the National Conference of State Legislatures, 29 states have enacted legislation related to autonomous vehicles.

Wisconsin is one of them. In 2017, Wisconsin lawmakers approved a bill on trucker platoons. This lets two or more semi-trucks coordinate their acceleration and braking electronically, allowing them to travel more closely together than they otherwise could. Human drivers are still in control of steering and can resume control at any time.

That law was the result of a task force created under former Gov. Scott Walker.

In its 2018 final report, the task force said that connected and automated vehicles (CAV) "have the potential to enhance safety, increase mobility and generate economic opportunity. These cars may also disrupt industries, increase traffic congestion, transform land use and impact the environment."

The state report on CAV technology also cautioned about the hazards automated vehicles would face in Wisconsin, where roads can be covered in snow and ice and deer may cross the road unexpectedly.