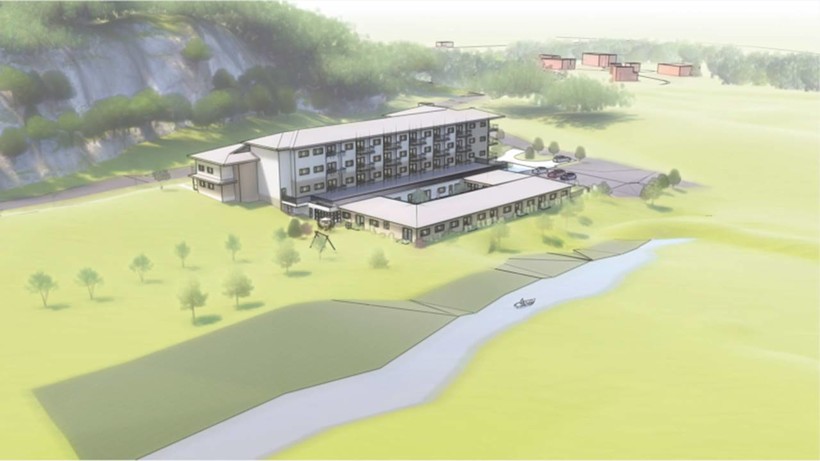 An architectural rendering of the Home of Our Own development.

Home Of Our Own Seeks To Build Affordable Complex In New Glarus By 2020
By Phoebe Petrovic
Share:

In a state where there's already a shortage of quality, affordable housing, people with disabilities often have even fewer options because they may need special accommodations. A group of parents in south-central Wisconsin is taking an unusual step to help their adult children with disabilities find housing that is both affordable and tailored to their needs: they're looking to build it.

Every week, they meet at a cafe in Mount Horeb to discuss their progress and talk over things like grant applications.

They need to raise $500,000 to help build an apartment complex they hope will open in the fall of 2020. They’re calling it Home of Our Own. These parents and grandparents all have adult children with disabilities who still live at home.

The group goes by the same name as the future complex, Home of Our Own, and functions under the anti-poverty organization Southwestern Wisconsin Community Action Program.

Home of Our Own’s leaders, Mary Anne Oemichen and Susan Wallitsch, met more than 20 years ago, when their children, Amy and Frank, were young. Amy Oemichen and Frank Wallitsch both have autism and are functionally nonverbal. The two mothers often spoke about their children's futures, even when they were still small.

They asked questions like, "What happens when our children grow up? And where are they going to live? And what are their lives going to look like?" Wallitsch said. "Because we know these are not going to be children who are going to be independent someday."

Amy is now 25 and Frank is 27, and both still live in their parents' homes. But Oemichen knows their children can't live with them forever. "Let’s face it, we are going to die one day, and we would much rather plan thoughtfully and to not have the planning be driven by a crisis," she said.

The parents of Home of Our Own worry about what will happen when they're no longer able to care for their children. They say they don't want to put them in group homes or isolated apartments because they worry that might expose them to abuse. People with intellectual disabilities experience sexual assault at a rate seven times that of those without disabilities, according to the U.S. Department of Justice.

So for the past six years, the families behind Home of Our Own have met weekly in the cafe, trying to figure out how to build a place where their children can live on their own, safely and affordably, among friends and neighbors, in rural Wisconsin.

Oemichen says they were "completely clueless" at the start of the process, but their experiences as parents to children with autism — and, in Oemichen's and Wallitsch’s case, as former attorneys — helped them keep going.

"If you have spent your entire adult life, pretty much, raising a young person with autism, you hit a lot of walls. You face a lot of obstacles, and you learn from the time they're little bitty children that you have to be an advocate," Oemichen said. "This is a really, really determined set of parents and we just refused to give up."

Home of Our Own dreamed up a specific plan: an integrated community in small-town New Glarus, welcoming residents of all abilities and incomes. They couldn’t find anything exactly like it in the state, or in the rest of the country.

Their model, which they intend to make replicable, has several guiding principles.

Oemichen and Wallitsch say they wanted to prioritize independence, safety, integrated communal living and affordability. They plan to cluster their adult children’s apartments, so the residents may receive assistance from supportive staff and benefit from the group's parents dropping in to check on their children. They hope to include several communal spaces, complete with kitchens and amenities such as raised garden beds and walking paths, so residents may come together as neighbors and community members. One quarter of the apartments will be specially designed for the people represented by the parents group, and the rest of the 40-unit complex will be available for those needing affordable, workforce housing.

The workforce population, Wallitsch says, earns $22 per hour or less, meaning they may have steady employment but still struggle to pay rent. More than half of all jobs in Wisconsin — 62 percent — pay less than $20 an hour, and half of those pay under $15, according to the United Way.

According to Mary Wright, president of Wisconsin Housing Preservation Corp., the nonprofit affordable housing developer partnering with Home of Our Own to build the complex, the rents will range from just above $400 a month to $1,250 a month. Rent will be scaled to income, meaning that the less a tenant makes, the lower their rent will be.

The complex’s income target is between 30 and 60 percent of the area median income, with a few market-rate units thrown in, Wright said.

Oemichen and Wallitsch hope that ensuring affordability at Home of Our Own will draw other tenants on limited-incomes, such as young workers or senior citizens. This, in turn, they hope, will create an diverse and integrated community.

Truttman says they’re hopeful the complex will address the wants and needs of the area, which has several larger employers, such as the New Glarus Brewing Company.

Disability advocates, nonprofit developers, and state officials all say: there's a shortage of affordable, accessible housing in Wisconsin. Even without a detailed wish-list, it's slim pickings.

"There is a very significant shortage of housing stock that is both affordable and accessible for people with disabilities," said Jason Beloungy, assistant director of Access to Independence, which serves people of all disabilities and ages in south-central Wisconsin.

In the past few years, the state has seen an increased demand for supportive housing like Home of Our Own, where some residents receive assistance from caretakers, according to the Wisconsin Housing and Economic Development Authority. David Ginger oversees the organization's allocation of tax credits for affordable developments.

"I suspect I could allocate all my tax credits to supportive housing for next couple of years and still not make a huge dent into the need," Ginger said.

Home of Our Own has applied for these tax credits, which would largely cover the $8 million project. They've also gotten approval to build the project from New Glarus. They've secured a plot of land, which is almost six acres and overlooks the Little Sugar River. With help from an architect, they’ve drawn up building designs.

Oemichen says they're getting closer.

Wallitsch, Home of Our Own’s president, says their children have kept them going, despite challenges.

"Our children are the most amazing teachers and they're the most remarkable people. And if we are strong, it is because our children have taught us to be strong," Wallitsch said.

If the parents succeed, they'll create 40 new homes in Wisconsin. But advocates say there are still thousands of people needing quality, affordable, accessible housing — and to answer that need, it'll take more than just a few dedicated parents.