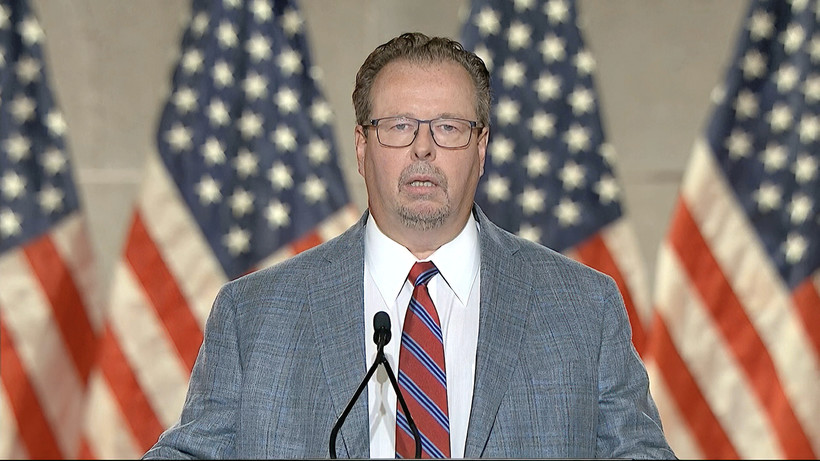 John Peterson, owner of Schuette Metals in Rothschild, spoke Tuesday at the Republican National Convention. Courtesy of the Committee on Arrangements for the 2020 RN/AP Photo

John Peterson, the owner of a central Wisconsin manufacturing business, said his business had suffered during the Great Recession and that the financial reforms championed by President Barack Obama "deprived us of the lifeblood of our industry: capital."

Peterson, who owns Schuette Metals in Rothschild and is a member of the Wisconsin Economic Development Corp.'s board of directors, spoke in the second night of the virtual convention, which included a mix of televised speeches and pre-taped videos. The convention's theme for the night was "Land of Opportunity," according to the party, and Peterson highlighted themes around business ownership and Peterson said of Schuette Metals, "we've been stamping our products and services 'Made in the USA' since 1957."

After laying off workers during the Great Recession, Peterson said "we scratched and we clawed for two years." Since Trump’s election, he said, the business increased revenues by 25 percent for two years in a row.

"But when I hear that (Democratic presidential nominee) Joe Biden is ready to raise taxes, crush us with regulations and weaken our international trade position, I shudder," Peterson said. "We simply cannot endure a Biden-induced recession."

Schuette Metals, which employs 165 people, does metal fabrication and manufacturing. It is also the site of occasional GOP campaign events, such as the Chamber of Commerce’s February endorsement of Republican Tom Tiffany for Congress. Tiffany was elected in a special election in May.

Another Wisconsin speaker in Tuesday’s event, Cris Peterson, is a dairy farmer from Grantsburg and a member of the University of Wisconsin's Board of Regents. She praised Trump's trade policy and said her farm and others have seen conditions improve after a period of sustained low milk prices that drove hundreds out of business.

"As a businessman, President Trump understands that farming is a complicated, capital-intensive and risky business,” she said. “More than any president in my lifetime, he has acknowledged the importance of farmers and agriculture."

Not every dairy farmer agrees that Trump's trade policies have benefited Wisconsin. Wisconsin still led the nation in farm bankruptcies early this year, and the Wisconsin Farmers Union called federal assistance "too little, too late."

Later in Tuesday's program, a Madison mother and her son appeared in a video touting school voucher policies.

Later this week, another central Wisconsin metal manufacturing company leader will speak at the RNC. One of the speakers scheduled for Thursday is Debbie Flood, president of Schofield-based Melron Corp., which makes architectural hardware.

Wisconsin’s politicians have had little or no role in the GOP’s virtual convention this week. On Monday, former Gov. Scott Walker gave the party’s official nomination of Mike Pence for vice president. No other current or former elected leader from Wisconsin is on the schedule. That’s a major change from 2016, when Walker, U.S. Sen. Ron Johnson; former U.S. House Speaker Paul Ryan, former Milwaukee County Sheriff David Clarke and then-Republican National Committee chairman Reince Priebus all spoke at the convention.

The Republican convention follows the Democratic National Convention held mostly virtually last week. That convention was to have been held in Milwaukee, but as with the RNC, plans for an in-person convention were mostly canceled due to COVID-19 risks.