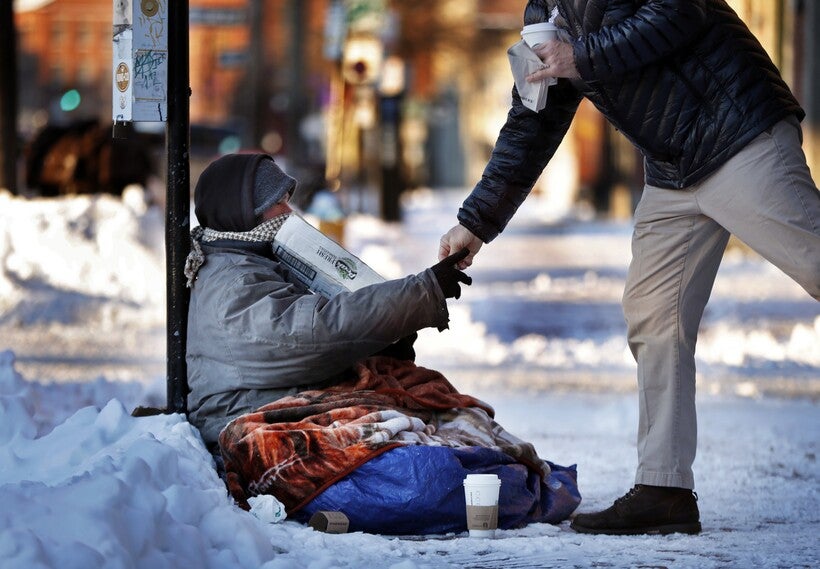 A homeless man sitting outside a coffee shop accepts cash from a customer on a bitter cold morning, Thursday, Jan. 31, 2019, in Portland, Maine, The polar vortex that's bringing misery to the upper Midwest is making an appearance in northern New England, where some places will struggle to reach the single digits. Robert F. Bukaty/AP Photo

Assembly Republicans are proposing $3.7 million to combat homelessness in Wisconsin.

Lawmakers unveiled their plans Thursday at press conferences around the state including in Eau Claire and Madison.

The new GOP proposals include spending $500,000 on a state homelessness prevention program and creating a new $300,000 program to direct those struggling with homelessness into stable housing.

Republicans also want to spend $500,000 more to bolster grants for shelters and add $900,000 annually to a housing assistance program.

Other measures are designed to help families find work and permanent housing and renovate apartments into affordable housing.

Rep. Treig Pronschinske, R-Mondovi, is authoring a bill in the legislative package that would create a $500,000 loan program to fund upgrades and repairs on buildings and homes that will be used to house homeless individuals. Pronschinske said the loans from the program would be forgiven after five years if certain conditions are met.

"This is an issue that’s important across the state," said Pronschinske. "It’s everywhere and I think that that’s important that we’re spreading the money out not just in the large cities but as well as in the rural areas."

When asked why no Democratic lawmakers were invited to join Republicans during the homelessness prevention package unveiling, Pronschinske said he could not answer that question.

"I am terribly disappointed in my Republican colleagues’ decision to hold their Milwaukee press conference on homelessness without speaking to or even inviting members of the Milwaukee Delegation or Black Caucus whose communities are deeply affected by this issue," said Bowen. "Once again, Republicans have chosen to act unilaterally on a critical issue that should not be partisan rather than work with Democrats to truly solve the problems affecting the citizens of Wisconsin and Milwaukee. Homelessness is not a Republican or Democratic issue — it is a Wisconsin issue that needs to be effectively addressed by stakeholders on both sides of the aisle."

Jeanne Semb is the housing services coordinator at Western Dairyland, which operates homelessness prevention programs in Eau Claire, Buffalo, Trempealeau and Jackson counties. She said while the additional funding is just proposed at this point and will have to be spread around the state, it can have a local impact.

But Semb said one of the greatest challenges faced by Western Dairyland and similar agencies around the state is finding landlords willing to rent to people transitioning out of homelessness.

"We’ve got all this money to house these people and we don’t have landlords willing to work with us," said Semb.