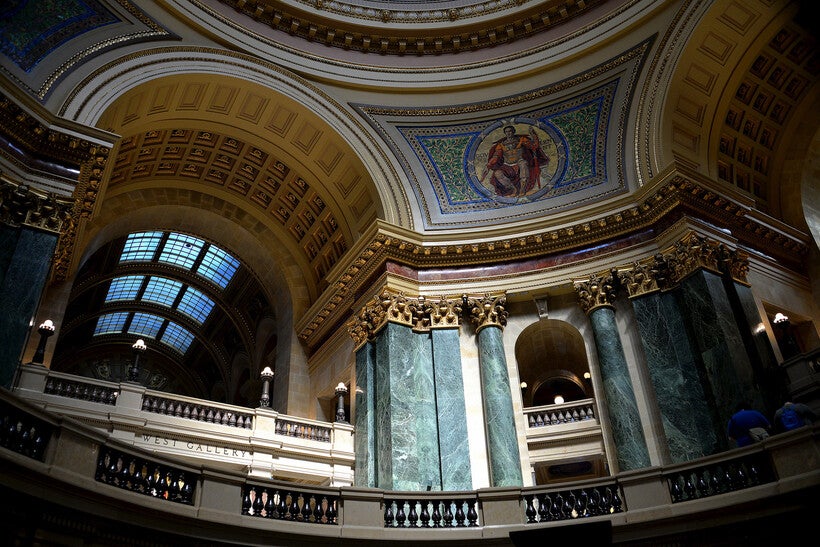 GOP lawmakers forged ahead Wednesday with proposals to spend billions of dollars in federal COVID-19 recovery aid headed to Wisconsin even as a new nonpartisan analysis found some of their plans may run afoul of federal guidelines.

The move marked the latest schism between legislative Republicans and Democratic Gov. Tony Evers, who has the authority under current law to spend the money without consulting the Legislature.

The Legislature's budget committee passed a total of 11 bills Wednesday, each of them on 11-4 party-line votes. While Evers has yet to say whether he'll sign or veto the plans, a spokesperson for the governor was sharply critical of the measures.

Some of the bills called for spending federal money in place of state funding on ideas already included the governor's budget, like replacing lead service lines and expanding broadband in Wisconsin.

But others proposed spending the recovery funds on paying down state debt or preventing a tax increase on employers to pay for the state's unemployment insurance fund — ideas the nonpartisan Legislative Fiscal Bureau indicated may not be permissible under the federal American Rescue Plan Act.

Senate Majority Leader Devin LeMahieu, R-Oostburg, told members of the budget committee during a public hearing that the plans reflected the Legislature's ideas for a "ridiculous amount of money" coming into Wisconsin.

"If that money's going to be spent, we need to make sure it's being spent as wisely as possible," LeMahieu said.

But Democrats described the plans as haphazard, saying they could force the state to repay federal funds in the name of scoring political points.

Wisconsin state government is set to receive about $3.2 billion in discretionary funding under the latest federal law. The federal rules that cover the funding give governors the power to spend it.

While Assembly Speaker Robin Vos, R-Rochester, had recently suggested lawmakers might sue the governor if he spends this funding without the Legislature's approval, LeMahieu testified Wednesday that he had no such plans.

"I've not personally looked at suing the governor," LeMahieu said.

The U.S. Treasury Department has yet to hand down specific guidelines for the funds, but the federal government has said broadly what's allowable and what's forbidden.

For example, the funds can be used to respond to the negative economic impacts of the coronavirus and make investments in water, sewer or broadband infrastructure. But they can't be used for tax cuts, and it's unclear whether they can be spent on expenses not related to the pandemic.

Based on those parameters, the Legislative Fiscal Bureau found several of the GOP bills might not be allowed under federal law. They include:

The Legislative Fiscal Bureau said the rest of the GOP proposals likely would be allowed under federal guidelines. They include:

During debate in the budget committee Wednesday, Democrats accused Republicans of hypocrisy, noting that just last year, many of them co-signed a letter urging Congress not to approve more federal funding for states.

"It's here with no help from you guys," said Sen. LaTonya Johnson, D-Milwaukee.

Republicans, meanwhile, questioned why Democrats were voting against issues they support, like a massive expansion of broadband.

"Why wouldn't the governor sign that bill?" asked Rep. Tony Kurtz, R-Wonewoc. "That is a really good bill."

Evers' spokesperson Britt Cudaback sent a tweet during the meeting that was critical of the GOP plans.

"It’s no surprise Republicans are too busy playing politics to worry about jeopardizing federal funds that will help our state bounce back from this pandemic," Cudaback said. "That’s why Wisconsinites trust (Evers) to work quickly to get help and support to folks who need it."

Cudaback did not respond to an email asking whether Evers would sign or veto the bills.

The latest federal funding is on top of the $2 billion in discretionary funding Evers was granted as part of the first coronavirus relief plan passed by Congress last year, known formally as the Coronavirus Aid, Relief, and Economic Security (CARES) Act. According to the Legislative Fiscal Bureau, the Evers administration had allocated $1.85 billion of that funding.

Evers has until the end of this year to spend the original CARES Act funding according to the Fiscal Bureau. The state has until Dec. 31, 2024, to spend the most recent batch of federal funds.