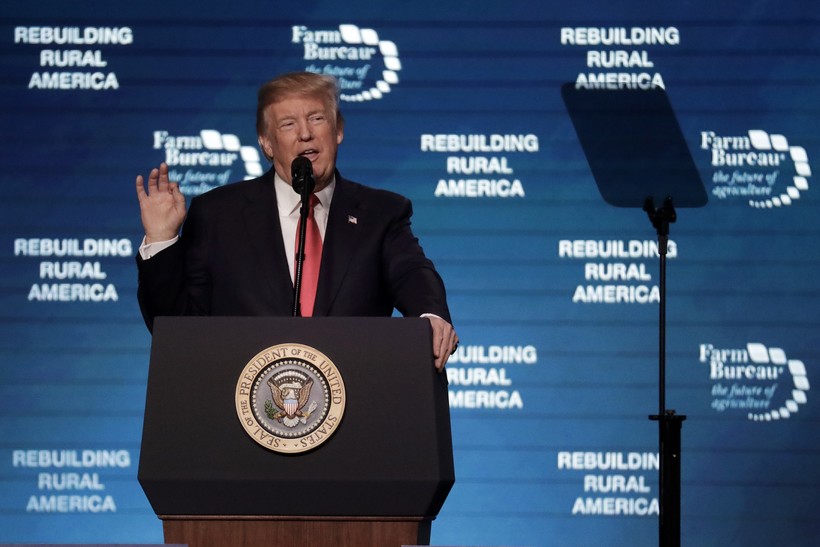 Wisconsin Farmers Weigh In On Trump's Progress On Rural Issues

Some Farmers Celebrated Trump's Attention to Broadband And Trade; Others Say The Administration Has Found Few Solutions To Ag Issues
By Hope Kirwan
Share:

As President Donald Trump marks his first year in office this month, Wisconsin farmers disagree on whether the administration has done enough to address rural needs.

Trump talked about trade, tax cuts and expanding broadband access during a speech at the American Farm Bureau convention this week in Nashville, Tennessee. It’s the first time in 25 years a president has spoken at the event for farmers and ranchers.

But Kara O'Connor, government relations director for the Wisconsin Farmers Union, said the speech didn’t ease her concerns over what she calls a lack of progress on rural issues by the current administration.

"Trump made a lot of promises in his speech about trade and a variety of other topics, but I think the actual record over the past year is more telling," O’Connor said.

O’Connor said the administration has lacked a clear vision for international trade and has yet to address problems with the Dairy Margin Protection Program (MPP), a U.S. Department of Agriculture safety net program that provides payments to dairy producers if milk prices fall below a certain level. Many of the state’s producers feel the program hasn't helped them deal with low prices during the last few years.

"We’re also faced with a real problem that there may not be any easy solutions to our current market challenges," Holevoet said. "When we talk about trade and the need for better market access, that’s probably our best way forward and toward better prices but that’s not a quick or an easy fix."

Milk prices have yet to rebound after falling in 2015 when an oversupply of milk crashed the international market. Milk prices typically rise and fall in a cycle. But agriculture economists say the prolonged down period is starting to take a toll on the state's farmers, especially as price projections for 2018 show little sign of improvement this year.

Holevoet said a high point of Trump’s remarks were his comments on trade, specifically the North American Free Trade Agreement, or NAFTA. Trump has threatened to pull out of the agreement if negotiations don’t lead to a more favorable deal for the United States, a move that would be devastating for Wisconsin dairy farmers and manufacturers. But the president took a different approach to talking about NAFTA this week.

"We’re reviewing all of our trade agreements to make sure that they are fair and reciprocal," Trump said in his remarks. "On NAFTA, I am working very hard to get a better deal for our country and for our farmers and for our manufacturers. It's under negotiation as we speak. But think of it: When Mexico is making all of that money, when Canada is making all of that money, it's not the easiest negotiation. But we’re going to make it fair for you people again."

"Sometimes it's hard to know how much to read into words that are used. But at least the phrasing he used as it relates to NAFTA I thought was encouraging," Holevoet said. "That coupled with other recent actions on NAFTA and sort of a change in rhetoric about it overall makes me more optimistic that we’re heading in a positive direction."

Holevoet said the true test will be whether negotiations follow the change in rhetoric and the administration reaches a new trade deal by the end of March.

Dave Daniels, a dairy farmer on the Wisconsin Farm Bureau Board of Directors, said he is also more optimistic about future trade deals after hearing Trump’s speech this week.

"He’s done trade differently than previous administrations and whether it's the right way or the wrong way, I don't think we’ve seen the end game at this point in time," said Daniels, who attended the American Farm Bureau’s convention.

Some farmers do believe the Trump administration is working to address the needs of rural communities, especially on infrastructure.

The president signed an executive order and a memorandum at the convention aimed at improving access to rural broadband.

Katy Schultz, a dairy farmer on the Professional Dairy Producers Board of Directors, said internet access is crucial for Wisconsin farmers to stay competitive.

"Having a limitation or a lack of internet access really does leave those farmers at a disadvantage, not only in their management style but their technological capabilities at their own farm," Schultz said.

And some farmers are hoping it’s the first step in addressing rural infrastructure in general.

"The president has talked about regaining and helping the infrastructure in our rural areas, that’s the roads, the railroads and even the waterways, with the lock and dams being replaced and repaired," Daniels said. "All of those things along with rural broadband, I think, are going to be just another cog in the wheel that needs to be fixed in the rural areas."

O’Connor said she was also hopeful when Trump announced he would be taking executive action on rural broadband, but after doing some investigating, she's skeptical.

"Actually reading (the executive orders) felt like popping a balloon," O’Connor said. "They relate only to the siting of internet facilities on federal properties and do almost nothing to fix the fundamental problems that we have with the expense of expanding broadband in rural communities."

Broadband wasn’t the only issue some farmers felt let down on. While Trump celebrated the tax overhaul that was passed at the end of 2017 during his speech this week, O’Connor said a new USDA report found not everyone will benefit from the changes.

"While the wealthiest farmers will benefit from the Trump tax plan, farmers with modest incomes will actually be worse off," O’Connor said.

USDA economists found the tax benefits from the latest reforms are not evenly distributed across income levels. The report found 50 to 70 percent of the total tax cuts will go to the top 10 percent of farm households by income, while farms in the bottom 20 percent of incomes will see an increase in the amount of taxes they owe.

Holevoet said it’s still early to tell how the much the tax overhaul will impact farmers in the state, but hearing about possible tax increases is troubling.

"Any additional expenses, whether those are an increase in tax burden or anything else you can think of, are certainly unwelcome by farmers who have already been burning through reserves and cash on hand in the last couple of years dealing with prolonged periods of low commodity prices," Holevoet said.

But he said there are potential positives from the tax bill as well, including the ability to deduct large equipment purchases in the same tax year they bought the equipment.