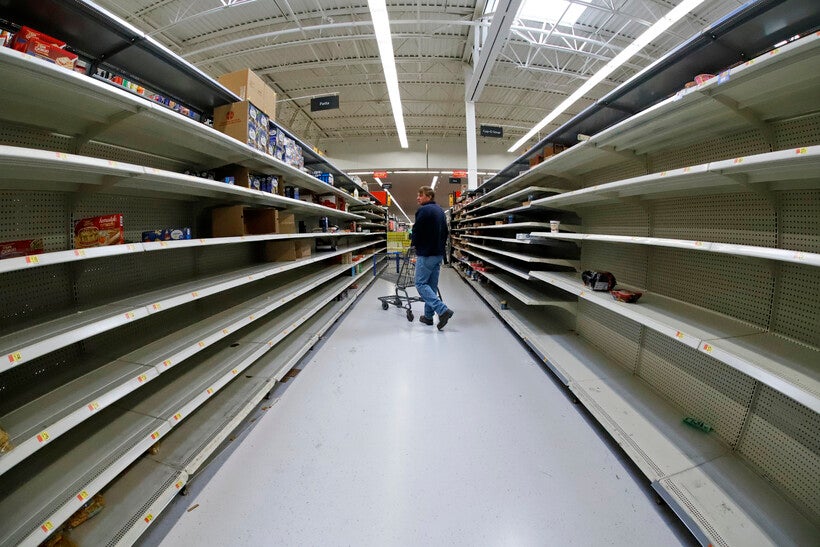 A man shops in an aisle of mostly empty shelves in a Walmart in Cranberry Township near Warrendale, Pa., Friday, March 13, 2020. Gene J. Puskar/AP Photo

Businesses in Wisconsin are adjusting their services and hours or closing their doors as they take steps to stem the spread of the new coronavirus.

The changes come around the same time Gov. Tony Evers directed the state Department of Health Services to issue a ban on gatherings of 50 people or more. The move, announced Monday, follows guidance from the Centers for Disease Control and Prevention issued Sunday.

The state order includes schools, theaters, bars, restaurants and gatherings for worship. Facilities like grocery stores, hospitals, pharmacies and other services that have been deemed critical infrastructure aren't included.

"While it was a difficult decision knowing the impacts on communities, families, workers, and businesses across our state, I believe limiting gatherings to less than 50 people is another critical step we can take in slowing and reducing the spread of COVID-19," Evers said in a statement. "Keeping folks safe and healthy has to be our top priority during this crisis."

The hospitality industry is seeing significant impacts to group business and is taking steps to enhance cleaning measures at facilities. The exact impact to resorts, lodges and hotels is unclear, said Trisha Pugall, interim chief executive officer of the Wisconsin Hotel and Lodging Association.

The association sent a survey to its roughly 600 member lodging properties Monday to gather information about issues facing them, what they're experiencing and steps they're taking to protect guests and employees. Pugall hopes to receive responses within the next two to three days. She said they're seeing a lot of businesses impacted by efforts to limit mass gatherings.

"So, automatically, that had an impact on group business around the state that is being scheduled now (and) the next week or two," she said.

Those that remain open are stepping up cleaning practices with more extensive, frequent disinfecting to protect people's health and safety. Pugall said they're also assessing what the loss of revenue from reduced business may mean for workers.

"Our members are very cognizant of the demands from less revenue, and they're trying to make very prudent decisions and find the best ways to take care of their very valuable employees," she said.

The Tavern League of Wisconsin said it had already experienced a serious hit to business with the recent cancellation of sports events. Spokesperson Scott Stenger said the governor's latest directive is better than what has been seen in other states, adding their members are committed to protecting employees and customers.

"I think first we have to make this work," said Stenger.

Stenger said the league, which represents about 5,000 members, employs tens of thousands of workers in Wisconsin. He said they're hoping members will be able to survive and maintain jobs.

"We certainly need to be at the top of the list of triage after this is over," said Stenger when asked whether members would require financial relief.

Kristine Hillmer, president and CEO of the Wisconsin Restaurant Association, said they're hearing some of their roughly 1,500 members are experiencing a drop in business ranging from minimal impacts to reductions of up to 60 percent. She said they're advising members to follow health recommendations from Dane County, including operating at 50 percent capacity for seating. They're also advising them to maintain social distancing of 6 feet between all tables, booths, barstools and ordering counters.

"We are also suggesting that they stop all self-service operations, such as salad bars, buffets, beverage stations so you can't get your own coffee and soda and so on," she said. "And, then prohibit customers from any self-dispensing of all packaged foods."

Hillmer said this is an unprecedented time for the food service industry. The association is trying to help members navigate changes with food preparation, human resources policies and unemployment as decisions are made by government officials.

States like Ohio and Illinois have already closed restaurants with the exception of curbside delivery. Hillmer said they're suggesting restaurants in Wisconsin prepare for takeout and delivery options.

"Even if it's a fine-dining establishment that may not be something they normally do," she said. "We know there are parts of our state that are food deserts, and so they still need restaurants as a place to go eat. We also know that if we close restaurants, there's a lot of food that's going to be wasted."

Either way, she said the dip in sales means some workers are facing unemployment, citing restaurants' thin profit margins. The U.S. House of Representatives recently passed a bill to provide relief for businesses, but Hillmer said it's problematic because it might be months before businesses see any financial relief. Senate Democrats are proposing $750 billion to increase hospital capacity, unemployment insurance and other aid for families and businesses.

"It's going to be a business-by-business decision," she said. "But, unfortunately, when there's this much business disruption, it's an inevitability."

Wanda Lavender is a manager at a Popeye's in Milwaukee where she makes $12 an hour. She said she and her family learned Sunday they need to self-quarantine for two weeks because her daughter's teacher tested positive for the new coronavirus and her youngest son has a fever.

"I've been at work for the past several days," she said. "I have no idea how many customers, how many coworkers and how many others I may have potentially exposed to this virus without knowing. It's really scary."

Lavender is among several workers and lawmakers who spoke as part of conference call Monday with reporters advocating for paid sick leave. Lawmakers like Rep. Lisa Subek, D-Madison, and Rep. Sondy Pope, D-Madison, have tried to pass measures that would allow workers access paid leave, but it's failed to receive support from republican lawmakers.

Justin Otto works at a theater in Milwaukee that has closed in an effort to prevent the spread of the coronavirus. He also supplements his income as a Lyft driver and by teaching guitar lessons.

"I have no work for the indefinite future," he said, adding he doesn't know what he's going to do.

Other businesses are closing but continuing to pay employees, including Wisconsin-based Lands' End. The apparel retailer is closing all stores across the United States through Sunday, March 29. REI also announced it's closing retail stores across the country through Friday, March 27. The closures include stores in Brookfield and Madison. Walmart has adjusted its store hours from 6 a.m. to 11 p.m. to accommodate stocking and cleaning efforts.