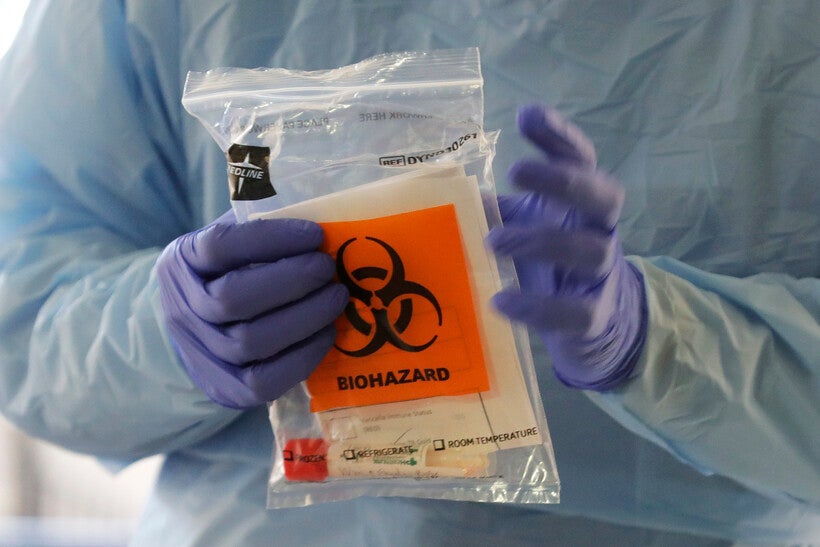 State and private laboratories are working to increase testing capacity for those suspected of contracting COVID-19.

According to UW Health in Madison, its labs are able to run about 100 tests per day, which means tests are being limited mostly to health care workers and those with serious underlying health conditions.

In an interview with WPR, UW Health Chief Quality Officer Jeff Pothof said the hospital is testing as many people as they can but the labs they send samples to have been overwhelmed, which has lead to prioritizing who is tested.

"We have been somewhat constrained by, really, not enough labs to test for COVID-19," said Pothof. "I think until recently, earlier this week, it was really the State Lab of Hygiene in Madison and then the lab in Milwaukee that was doing most of the testing."

According to the Wisconsin State Lab of Hygiene, they along with the city of Milwaukee Health Department, Mayo Clinic in Rochester, Minnesota, and private laboratories like ARUP, Quest Diagnostics and LabCorp are providing COVID-19 testing.

But Pothof said samples are also being sent out to labs in other states that may have excess capacity like the University of Washington, Seattle.

"The issue we run into, though, is as soon as those labs go online within a couple of days they’re over capacity," Pothof said. "There's just not enough. So, everyone in the country is like, 'OK, lets send it to ... You know, pick the next lab that comes online.'"

Currently, Pothof said UW Health is able to run about 100 tests per day with results coming back within 24 to 48 hours. He said he’s heard the U.S. Food and Drug Administration is working to speed up approvals needed to let other private labs around the country begin processing samples as well.

"But instead of 100 tests per day we're hoping to be able to run 1,200 tests per day," said Pothof. "And instead of the state lab, which is taking 28 to 48 hours for a result, we hope to get results within five to six hours. That’s a game changer for us. That changes everything."

But as it stands now, prioritizing is necessary.

The next group that is tested are those patients sick enough to require inpatient hospitalization. After that, Posthof said patients with severe underlying health conditions are tested.

"The last group that we test, and this is the group that I feel can be frustrated right now, is the individual that might have all the right symptoms but is doing OK," said Posthof. "So, their symptoms are consistent with a cold and mild flu."

Posthof said while labs in Wisconsin and elsewhere are overwhelmed now, he is encouraged that testing rates are expected to increase over the next one to two weeks.

In a video posted to Facebook, Mayo Clinic Health System rheumatologist said the system of hospitals and clinics has developed its own in-house COVID-19 testing capability.

According to a press release from Mayo Clinic, it has the capacity to run between 200 and 300 tests daily with results expected within 24 hours from its laboratories in Rochester. Mayo Clinic has hospitals and clinics located in western and northwestern Wisconsin.

Maribeth Schaefer of Milwaukee was in Las Vegas when she started coughing Sunday, March 1. As a light smoker she didn't think much about it, she told WPR. By the next day she said she started feeling other symptoms akin to the common cold.

After returning home a few days later on Tuesday, Schaefer said her symptoms got worse.

Nearly a week later on Monday, March 9, she said she called her primary care physician through Froedtert Hospital and the Medical College of Wisconsin and was told she likely had viral bronchitis. She pressed on and was eventually told to visit an urgent care center. Schaefer said she was tested for influenza and was given a chest X-Ray, both of which came back negative. After that, she said her doctor returned wearing protective equipment.

"He comes in, and he was like, 'I can’t give you a COVID test because your fever isn’t high enough, but I am sure that’s what you have,'" said Schaefer. "So, you need to go home and you need to isolate and your family needs to quarantine and anyone who has been in contact with you, you need to let them know."

Schaefer said she was told that her fever of 100.3 degrees wasn’t high enough to qualify for a COVID-19 test. According to the Centers for Disease Control and Prevention, a fever is 100.4 and is a common symptom of COVID-19.

After returning home she became angry that despite being told she likely had the disease, she didn’t have an official diagnosis.

"You know, when they have a number on the news that says only 30 people are positive, how many more people like me are sitting at home?" asked Schaefer. "And they say they’ve only done 300 tests. Well, you say you have plenty of tests when you put it out to the news. But in practice, I am being told I have it but I can’t be tested. It's crazy."

In response to a request for comment on testing capability, a Froedtert spokesperson sent a statement to WPR stating testing is available for patients upon recommendation of a physician, though it wasn't able to comment on Schaefer's specific situation.

In a text message to WPR at 1:49 p.m. Monday, Schaefer said she had gotten approval from the Milwaukee Health Department to get tested at a drive-thru center set up in an ambulance bay at Froedtert's Moorland Reserve Health Center in New Berlin.

She told WPR in a subsequent interview that after a short wait in her car, she was called by the hospital to drive into the facility and a health care worker took swabs from her nose and throat. Schaefer said she then drove home and is resting in isolation from the rest of her family.

"The testing today and seeing how fast it could be done was promising and it makes me feel hopeful," Schaefer said. "But I also see it could have been Monday and that's a little scary to me on how hard I had to push."

Schaefer said she wasn't told when to expect her test results from the drive-thru triage center.