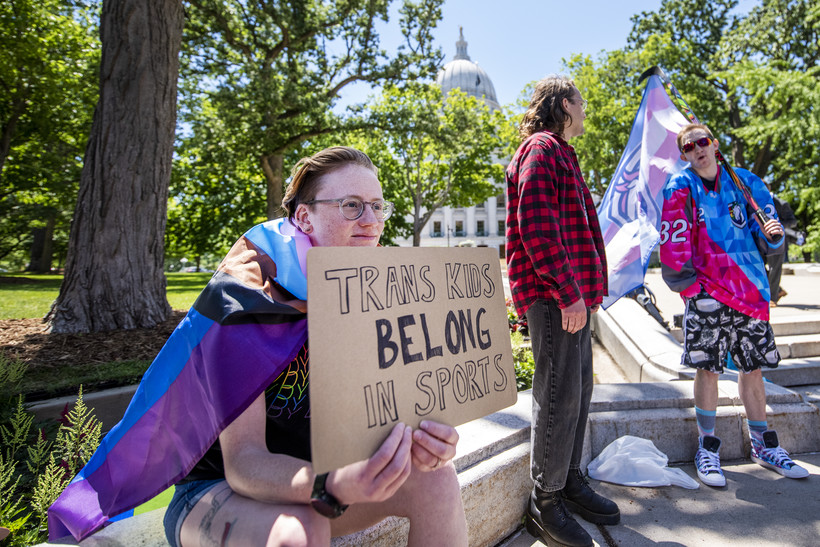 Wisconsin 'Building Equality' for LGBTQ people, according to new report

According to a new Human Rights Campaign Foundation report on LGBTQ-centric laws across the United States, Wisconsin is "Building Equality" going into 2022. The report comes as Wisconsin Republicans push new legislation to ban transgender youth from accessing gender-affirming care.

The eighth edition of the State Equality Index, released in association with the Equality Federation Institute, classifies the 50 states and Washington, D.C. based on both statewide LGBTQ equality protections and anti-LGBTQ laws on the books.

Wisconsin is one of four states in the report's "Building Equality" category, along with Florida, Kansas, and North Dakota. That’s above the 22 states listed as "High Priority to Achieve Basic Equality," but below three states "Solidifying Equality." A further 21 states plus Washington, D.C. attained the report’s highest ranking, "Working Toward Innovative Equality."

"Wisconsin is doing OK," Cathryn Oakley, the state legislative director and senior counsel for HRC, said. "It definitely has some room to improve."

She said Wisconsin’s nondiscrimination laws do not include gender-identity protections.

Wisconsin's Republican-controlled Legislature introduced multiple bills targeting LGBTQ youth in 2021, and is continuing to do so in the first weeks of 2022. Democratic Gov. Tony Evers has signaled he would veto a bill revolving around trans athletes. It’s likely he would veto the other bills if they end up on his desk.

Oakley said that doesn't mean the legislation — even if it doesn’t pass — won't have consequences.

"It's not about any actual issue," Oakley said. "It is 100 percent about marginalizing trans youth and trans youth don't need these bills to actually be passed in order to feel some of the impacts of that marginalization."

Oakley said it's important for people to have more understanding of what it means to be a transgender child.

"I think that's the issue that's in front of us, is making sure that people have a better sense of what it means to be a trans kid, and why trans kids are simply not a threat to anybody," Oakley said. "The best thing we could do for trans kids is love them and support them."

The most recent proposal from Wisconsin Republicans would ban transgender children from receiving puberty blockers, hormone replacement therapy and other gender-affirming care, according to a copy of the bill obtained Friday afternoon by Wisconsin Public Radio.

"Children are especially vulnerable and we must protect them and allow for their natural development," the bill authors wrote in a co-sponsorship memo. "(Y)oung people need to be fully grown to have the mental faculties to make such substantial decisions, and we have deemed it to be within the public interest to restrict parental discretion as well."

The proposed legislation is parallel to bills in other states. Arkansas passed a similar ban on trans youth treatments in 2021, but that legislation has been temporarily blocked as it works its way through the court system.

One set of proposals introduced last year, meanwhile, would prevent trans women and men from playing on K-12 and college sport teams that align with their gender identity. Wisconsin LGBTQ groups lobbied against the measure after its introduction.

Another bill introduced in September would compel schools to inform parents and guardians when a program related to gender, gender expression, gender identity or sexual orientation is set to be provided. That legislation would also allow parents to opt their children out of those programs.

Opponents of the legislation argued it would harm students and exacerbate problems LGBTQ people already face with sexual assault and suicide. Research has found LGBTQ youth are four times as likely to attempt suicide compared to their peers.

Groups such as the American Medical Association and the American Academy of Pediatrics denounced the national wave of anti-trans legislation in press releases last year.

"Evidence-based medical care for transgender and gender diverse children is a complex issue," American Academy of Pediatrics President Lee Savio Beers said in that organization's press statement. "Pediatricians are best able to determine what care is necessary and appropriate for these children, but these bills interfere in the physician-patient-family relationship and would cause undue harm."

Republicans have not officially introduced the gender-affirming care ban bill as of Friday afternoon. The gender and sexual orientation lesson and trans sports bills have not reached the governor's desk.