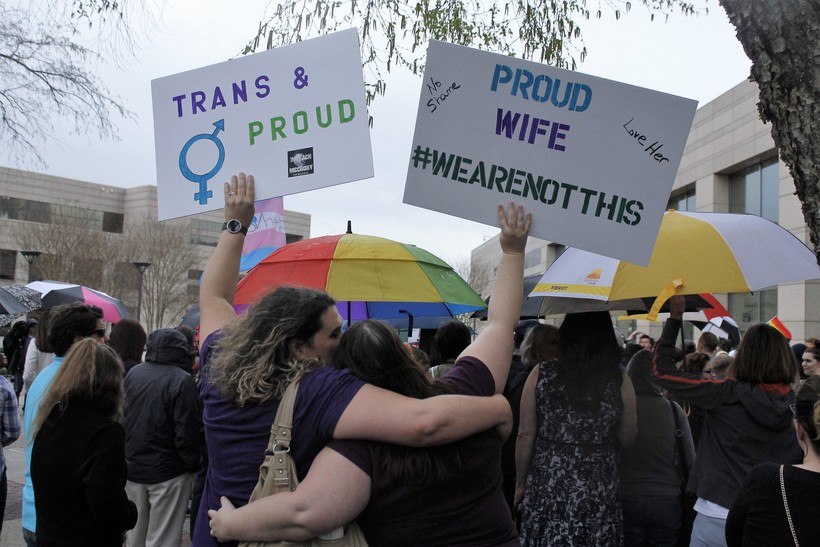 A pair of Republican bills unveiled Tuesday would prohibit transgender athletes in Wisconsin from playing on the K-12 and college sports teams that align with their gender identity.

The proposals, sponsored by Rep. Barb Dittrich, R-Oconomowoc, and Sen. Kathy Bernier, R-Chippewa Falls, would prohibit transgender females and males from participating on the teams that align with their gender identity and create a third team at schools for all athletes.

During a Tuesday press conference at the state Capitol, Dittrich argued biological women and girls are "losing opportunities at titles, records, scholarships and even participation at times" because transgender women and girls are playing on their teams.

"If we remain silent and no one stands for these women athletes, who will?" Dittrich said.

Rep. Janel Brandtjen, R-Menomonee Falls, said women "can't win against men" in sports, arguing someone who is biologically female would lose to a transgender athlete who identifies as female.

"That’s the biology, the reality," Brandtjen said during the press conference. "And, honestly, you'll ruin women's sports forever. Why would you compete if you knew you couldn't win?"

Former Olympic athlete Bonnie Blair Cruikshank also offered her support for the legislation in a recorded message played during the press conference. During the message, she compared transgender female athletes to athletes who use performance-enhancing drugs.

"I just know that athletes should not have to compete in an unfair environment and women’s sports should be protected," Cruikshank said in the message.

Gov. Tony Evers has the power to veto the bills if they are approved by the GOP-controlled state Legislature. He signaled Tuesday he would do so, if necessary.

"My message to Wisconsin’s transgender kids and students today is simple: I see you. You are welcome, you are wanted, and you belong," Evers said in a prepared statement.

During the press conference, Dittrich pushed back on a possible veto from the governor.

"If the governor really cares about women, he should absolutely advance this legislation ... unless he’s a sexist," she said.

Brian Juchems, co-executive director of GSAFE, an advocacy group for LGBTQ youth based in Madison, pointed out the Wisconsin Interscholastic Athletic Association (WIAA) already has a policy that puts barriers in place for transgender girls who want to participate in K-12 sports in Wisconsin.

Under the policy, transgender girls have to receive hormone replacement therapy for at least a year, have a signature from a doctor and parental consent before competing on a girls' team.

Juchems said he has only worked with "one or two" transgender girls who want to participate in school sports, in part because of the complicated logistics and accompanying stigma.

Shelley Gregory, who works with Milwaukee-based transgender advocacy and support group FORGE, said transgender students who choose to pursue athletics are looking for some of the same things from sports that other young athletes are: inclusion, support and a social circle.

"Their needs are no different than any other youth, and the sorts of proposals that are included in this legislation really just create incredible barriers, practically and emotionally, for these students," Gregory said. "Growing up is a difficult enough challenge for any student and to add this kind of barrier to their experiences is very disappointing, and it’s unnecessary."

Gregory said continued advocacy work against the bills will be essential to transgender youth’s mental health.

"Many students are already struggling because of a lack of family (support), and they may be on their own in trying to advocate for their inclusion in athletic teams or other social circles," Gregory said. "Students should know that they have support, they have support from adults in the state of Wisconsin who have their best interests at mind."

GSAFE and Fair Wisconsin, another LGBTQ advovacy group, rallied outside the Capitol during the press conference on Tuesday.

Megin McDonell, executive director of Fair Wisconsin and mother of a transgender high school student, said groups will continue to lobby against the measures.

"It’s already difficult and sort of unwelcoming for trans girls to participate in sports and activities in the school, so a bill like this is really just one more direct message to these youth that they’re not welcome," McDonell said. "It’s a very real impact that it has on these kids’ health and well-being."

Members of the Legislature’s LGBTQ caucus also spoke out Tuesday against the proposals.

"Today’s Republican attacks on transgender youth and children in Wisconsin continue a deeply disturbing trend of legislators seeking to limit the rights and opportunities of LGBTQ+ youth in their schools," the caucus said in a prepared statement. "All young people, including transgender or intersex athletes, should have the right and the opportunity to participate in organized, school-sponsored athletics consistent with their gender identity."

Similar proposals related to transgender athletes have been introduced in more than 20 states across the country, including in South Dakota, North Dakota, Mississippi, Georgia, Kansas, Utah, South Carolina and Tennessee.

Though the chances of the proposals becoming law in Wisconsin are seemingly nonexistent while Evers is in office, legal experts say such laws would likely be blocked by courts anyway.

Last summer, the U.S. Supreme Court ruled that the 1964 Civil Rights Act protects gay, lesbian and transgender employees from discrimination based on sex.

According to Abigail Churchill, founder and director of Trans Law Help Wisconsin, that decision was a landmark one for transgender rights.

"These bills likely won’t withstand a legal challenge made against them," she said.

Churchill said Title VII of the Civil Rights Act, which prohibits discrimination based on sex, has "developed alongside" the Title IX protections against sex discrimination in school sports.

She also pointed out that President Joe Biden signed an executive order in January that applies last year's Supreme Court decision broadly, meaning its protections extend beyond the workplace and into housing, health care and schools.

"Although courts are not bound by the executive order ... most courts so far have interpreted the meaning of 'sex' as prohibiting discrimination on the basis of gender identity," Churchill said.

Churchill said it is "possible, but not likely" that the Supreme Court would ever revisit and reverse its decision on the matter.