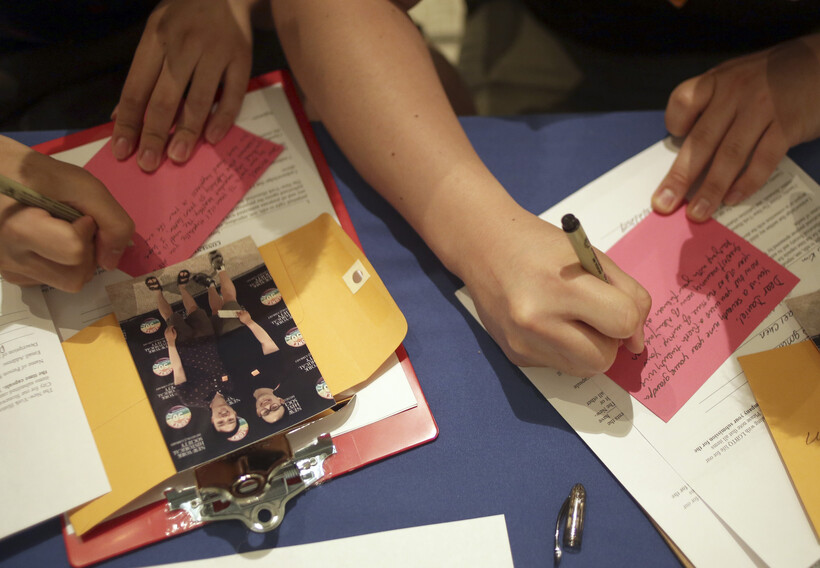 Proponents of a bill introduced Wednesday argue that parents know what’s best for their children and should be entitled to know if information is being taught that may conflict with their religious beliefs so they can excuse their children from the lesson or have discussions at home about it.

"All I see in this bill is a mechanism for those that disagree, they can opt out," said Rep. Robert Wittke, R-Racine. "This is merely just a way to give parents a choice."

However, opponents of the bill noted that schools may be one of the only places children who are LGBTQ+ may hear about gender identities and expressions and sexual orientations that help them understand who they are and affirm that they deserve respect.

"I believe that students should be able to see themselves and their families represented in classrooms," they said. "In my own first or second grade classroom, we all watched a video where people introduced their families — one child had two dads, and another two moms — and then we continued with thoughts of who got to play on the seesaw at recess. We gained a little bit of acceptance, but none of our thoughts were in any way harmed by the information, and none of our lives worsened."

Dana Pellibon, co-executive director of the Rape Crisis Center, said allowing parents to opt their potentially LGBTQ+ kids out of these lessons because of their own beliefs — or opt their kids out of lessons that could help them understand and respect their LGBTQ+ classmates — would harm students.

Pellibon described her child’s own changing understanding of his gender expression and identity. She said the way he identified changed when he was 10, and again several years later — and he was able to be supported in doing so by Pellibon and by his teachers.

"What that taught me is that giving him knowledge and freedom to explore who he was in every aspect allowed him to make his path, and not be pushed in any particular way," she said. "That’s what education does — it gives people the freedom to think for themselves and decide their own trajectory."

LGBTQ+ people are more than four times more likely than non-LGBTQ+ people to experience rape, sexual assault and other violent assault. Nearly half of transgender people are sexually assaulted at some point in their lifetimes.

"Gender identity and gender expression are critical parts of sexual violence prevention," said Ian Henderson, director of legal and systems services at the Wisconsin Coalition Against Sexual Assault, testifying against the bill. "Rigid beliefs about gender, sex and sexuality have been identified as putting someone at higher risk for perpetrating sexual violence."

LGBTQ+ youth also contemplate suicide at nearly three times the rate of heterosexual youth, in part because of bullying and lack of acceptance from family members and peers.

"I would consider student mental health in a state of emergency, but especially for LGBTQ+ students," said Heather Chun, prevention and education specialist at the Rape Crisis Center. "This is suicide prevention."

Lawmakers also disagreed over what constituted a program that would require parental notification under the bill. Several lawmakers questioned whether a school visit from U.S. Sen. Tammy Baldwin, Transportation Secretary Pete Buttegieg, or U.S. Rep. Mark Pocan would qualify, as all three identify as LGBTQ+.

Discussion of what programs would require parental notification centered around those that might touch on sexual orientations and non-cisgender identities and expressions of gender.

Brian Juchems, co-executive director of GSAFE, questioned why lawmakers in favor of the bill were focused solely on LGBTQ+ examples. GSAFE is an organization supporting LGBTQ+ youth in Wisconsin schools.

"Straight people also have sexual orientation, cisgender people also have gender identity, so I’m not quite sure if this bill says that if you talk about people who are straight, if that means that we have to give parental notification, too," said Juchems.

The Wisconsin Catholic Conference registered in support of the bill, alongside Wisconsin Family Action and other groups.

"As the first and primary educators of their children, parents and guardians must be included in assessing when and how best to broach these sensitive topics," said Kim Vercauteren, executive director of the Wisconsin Catholic Conference. "No education policy should substitute the authority of a teacher, school board, school staff or contracted entity for that of parents, especially when it comes to matters that have a far-reaching impact on the emotional, physical and moral well-being of their children."

The state Department of Public Instruction opposed the bill. State superintendent Jill Underly also released a statement objecting to several education-related bills, saying they had been rushed to a hearing — a frequent complaint from lawmakers opposed to the bill, as well, since it was given a hearing only a day after it had been filed.

"At this pivotal moment when we should be focused on doing what is best for our children, our legislative leaders are choosing to focus instead on ramming through bills that stand to cause real harm to students and that have barely seen the light of day," Underly wrote. "Make no mistake, they know exactly what they are doing: using our children as pawns in a culture war."