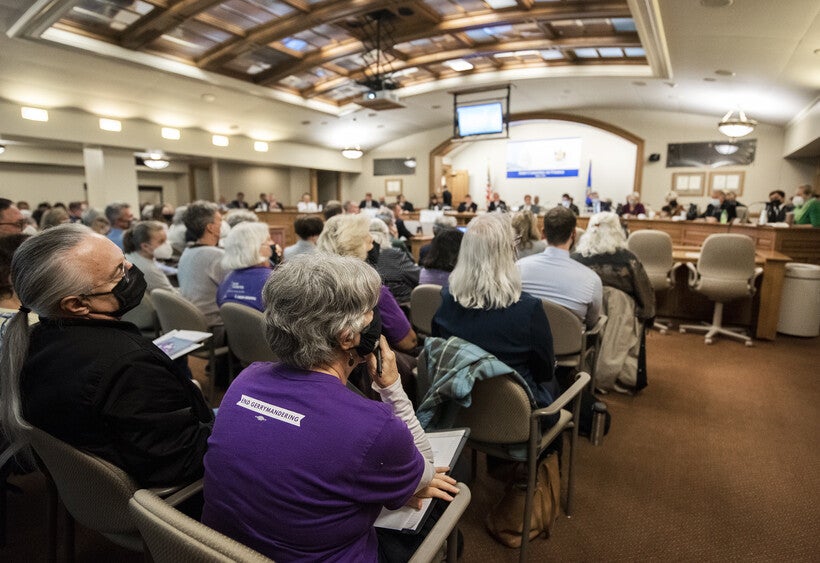 Attendees listen as state legislators discuss redistricting during a hearing Thursday, Oct. 28, 2021, in at the Wisconsin State Capitol in Madison, Wis. Angela Major/WPR

'What you're doing is immoral': Hundreds gather at Capitol to push back on GOP redistricting plan

Hundreds of people packed the state Capitol on Thursday to weigh in on Wisconsin Republicans’ 2021 redistricting plan.

The new political lines could determine how much control Republicans continue to hold in state government and Wisconsin’s Congressional delegation until 2031.

Republican lawmakers who control the state Legislature unveiled their bills for new state legislative districts and Congressional districts last week. Since then, a number of nonpartisan groups have decried the proposed districts — which are very similar to the state’s current maps — as partisan gerrymandering that gives Republicans too much of an advantage in future Wisconsin elections.

During Thursday's public hearing, Assembly Speaker Robin Vos, R-Rochester, argued Democrats don’t hold more seats in the state Legislature because they are "out of touch with their communities." 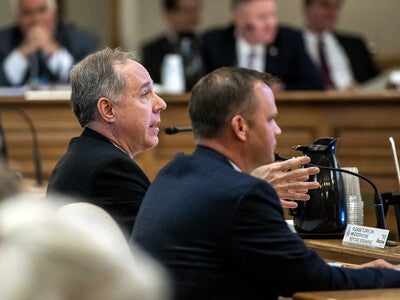 "Democrats have a problem winning in much of Wisconsin because your agenda is clearly out of step with the reality for most of Wisconsin," Vos said. "The frustration of not being able to win elections shouldn’t be blamed on maps."

Democrats on the committee spent more than an hour questioning GOP leaders on their plan before public testimony began. They issued sharp criticism of the proposal, arguing it's an unfair continuation of 2011’s maps, which were challenged in court as a partisan gerrymander. A case against those maps went all the way to the U.S. Supreme Court.

"When does it stop?" said Sen. Jeff Smith, D-Brunswick. "Which decade does it stop, which decade do you believe that people and the voters should be able to determine who they want to lead this state?"

'What you’re doing is immoral': Hundreds line up to offer, observe public testimony

Members of the public filled the committee room and spilled into the halls of the Capitol for the hearing, and dozens from across the state lined up to offer several hours' worth of testimony opposing the Republican plan. 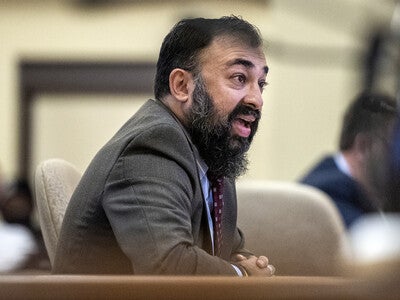 During his testimony, Sachin Chheda, chair of the Wisconsin Fair Maps Coalition, a redistricting advocacy group, said the public showed up in force to push back on the maps and say "enough is enough."

"Right now we have a system in which, when huge majorities of Wisconsinites say they want something, the majority party in the Legislature chooses to not even debate it," Chheda said. "What you’re doing isn’t right — it’s immoral, it’s unethical, it’s anti-American. And the people don’t stand for it."

Grace Quinn of Appleton, who identified herself to lawmakers as representing "the younger demographic" in Wisconsin, said the Republican map proposal makes her "terrified" for her future.

"Our current maps silence our voices and our votes," Quinn said. "If you believe in democracy, you will reject these maps."

Rachel Soliday of Wauwatosa urged lawmakers to "echo the will of the people" and "give all Wisconsinites a fair shake."

According to a 2019 poll from Marquette University, 72 percent of Wisconsinites support mapmaking by a nonpartisan commission, rather than the Legislature and governor. A number of counties across the state have also approved ballot referendums that support a nonpartisan redistricting commission.

Gov. Tony Evers created a new redistricting commission for the state last year, but Republicans have rejected that effort as partisan and refused to use its map proposals as a starting point for the 2021 mapmaking process. Evers has indicated he will not sign the Republicans' proposed maps into law unless they change up their proposal.

John Henderson, who drove from Elkhorn for the hearing, urged GOP leaders to reconsider their position and pursue bipartisan cooperation on the issue.

"I don’t understand why you would pass this bill now, knowing that it’ll be vetoed, and it’ll just waste more of mine and other taxpayer’s money to settle it in courts," he said. 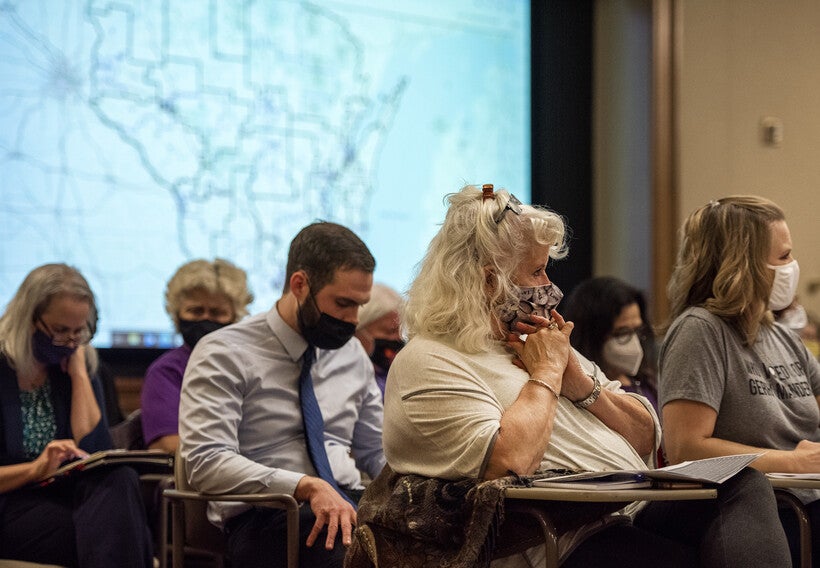 Attendees listen during a hearing about redistricting Thursday, Oct. 28, 2021, in at the Wisconsin State Capitol in Madison, Wis. Angela Major/WPR

Vos has said he expects both chambers of the Legislature to vote on the GOP’s proposed maps before the end of the fall legislative session on Nov. 11.

If Evers vetoes the maps, the mapmaking process will move to the courts. There are already state and federal lawsuits pending in anticipation of a stalemate between the GOP-controlled Legislature and the governor.

The last time the Wisconsin Supreme Court handled a case related to redistricting was in the 1960s, though Republicans are pushing for the court to have jurisdiction over mapmaking this year.