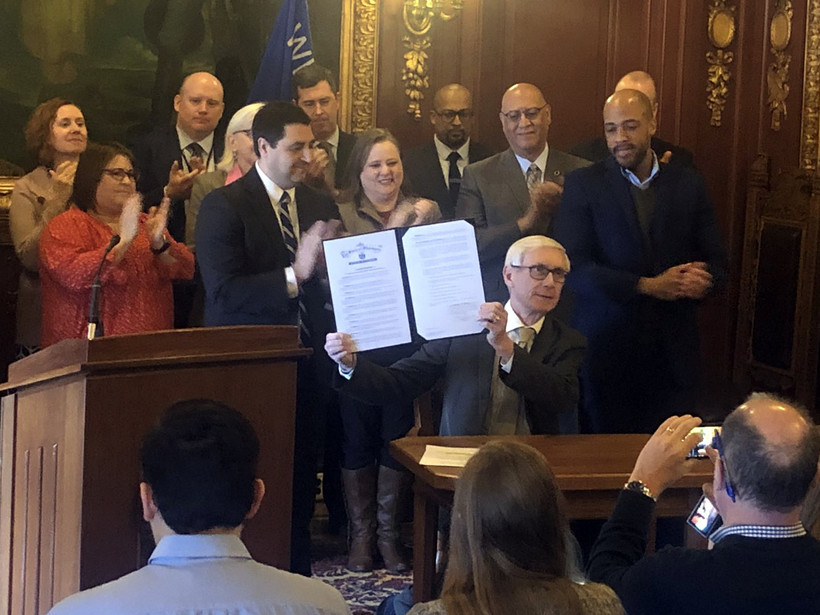 Gov. Tony Evers signed an executive order Monday creating what he calls a nonpartisan redistricting commission in Wisconsin, but it’s unclear how the commission will affect the state’s next set of legislative maps.

The order, which Evers first announced in his State of the State address last week, creates the "People’s Maps Commission" to draw a new set of legislative maps for Wisconsin following the 2020 U.S. Census.

The order mandates no elected officials, public officials, lobbyists or political party officials can be members of the commission. Instead, it will be made up of experts in nonpartisan redistricting, members from "communities of interest" and residents of each of the state’s eight congressional districts.

"People should be able to choose their elected officials, not the other way around," Evers said at a Capitol press conference.

The governor said the Republican-controlled Legislature's choice to not move forward on issues like medical marijuana and expanding background checks on gun sales is proof lawmakers aren't accountable to voters. He pointed to strong public support for those measures, according to statewide polling from Marquette University Law School.

Wisconsin Democrats have pushed for years for a nonpartisan redistricting commission in the state, similar to what exists in Iowa.

However, the new commission differs from Iowa’s system in major ways. Most notably, because it relies on an executive order, any maps developed by the commission will be recommendations and won't carry the force of law.

Assembly Speaker Robin Vos, R-Rochester, has already said Republicans who control the state Legislature will move forward in 2021 with drawing maps separate from the commission.

Speaking on WPR's "The Morning Show" on Monday, Vos reiterated that stance, calling the governor's proposal a "phony, faulty process."

"They can create whatever maps they want to, but the Legislature is going to go through the same process that we always have," Vos said. "This is just Democrats rallying their base, this is not something that has a huge appeal outside of a Democrat activist."

Republican lawmakers moving forward with drawing maps means the new districts will likely end up in court, as they have in previous years.

Under the state constitution, maps must be approved by the Legislature and governor. During the last state redistricting process in 2011, the GOP-controlled Legislature sent new maps to former Republican Gov. Scott Walker, who signed them.

In previous years, split party control between the governor’s office and Legislature — the same dynamic that exists now — has led to lawsuits, court orders for changes to maps and maps drawn by courts.

Democratic Attorney General Josh Kaul, who joined Evers at Monday’s event, said he hopes that can be avoided for the next set of maps.

"We have seen all sorts of money wasted, taxpayer dollars wasted, on litigation about what our maps should be," Kaul said.

Under the governor’s order, members of the new commission will travel the state to provide communities information about redistricting and take testimony from citizens. They will begin drawing legislative maps "as soon as practically possible" after the upcoming census is completed.

The order declares maps must "be free of partisan bias and partisan advantage," as well as "avoid diluting or diminishing minority votes" and "be compact and contiguous."

The order criticizes the current set of maps, signed by Walker, as "some of the most gerrymandered, extreme maps in the United States."

The maps were challenged in court and went all the way to the U.S. Supreme Court. Ultimately, justices there declined to rule on the case.