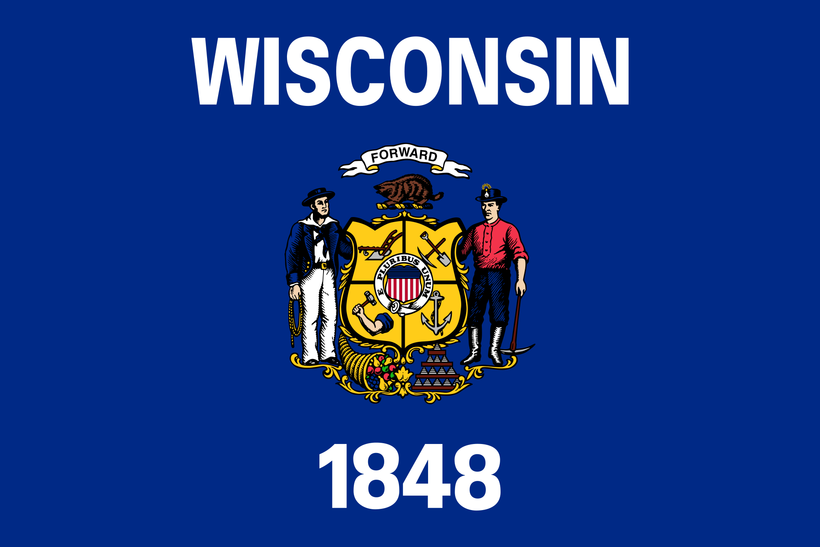 What Do All The Symbols On The Wisconsin State Flag Mean?

A Miner, A Sailor And A Badger Walk Into A Blue Field
By Karl Christenson
Share:

Here’s a classic joke: A miner, a sailor and a badger walk into a busy bar. Actually, it’s not a bar ... it’s the Wisconsin state flag, but many agree that it is busy.

From an anchor to a pickaxe, to a pyramid stack of 13 lead ingots, Wisconsin's state flag is flush with symbols and imagery. But what do they all mean?

Zander, a fourth grader at Mineral Point Elementary School, submitted that very question to WPR’s WHYsconsin. So we turned to a Wisconsin historian to help us parse it all out.

Matt Blessing, director of the Wisconsin Historical Society's Division of Library, Archives and Museum Collections, sat down with WPR to provide some context and help us decipher each of the symbols and elements on the Wisconsin state flag. Here's what he had to say.

History Of The State Flag, And The Blue Background

The Wisconsin state flag was adopted in 1913. And that year is important because that was the 50th anniversary of the Civil War. And there are whole bunch of other states that adopted a state flag during this era, right before World War I.

The blue field — or background — represents traits like wisdom, trust and truth. But in 1913, what was really important was blue represented loyalty. If you look at the state flags that have a blue field, and it’s the states of the old Union during the Civil War.

A Miner, A Sailor And A Badger

At the very top you have the state’s motto: "Forward." And that was adopted by the state Legislature in 1851, just three years after statehood, as the state’s motto. Beneath the motto is a relatively small badger, the mammal, not Bucky Badger.

The miner is a reflection of early Wisconsin history; lead and zinc mining in the Driftless area, and copper mining in northern Wisconsin. But it’s really about work. It’s a tribute to Wisconsin’s workers, not necessarily a miner.

The sailor makes perfect sense especially when you consider 19th century Wisconsin history and more than 1,000 miles of Wisconsin coastline on Lake Michigan and Lake Superior and the importance of commerce.

A Golden Seal Of Trades

Between (the miner and sailor) is a golden seal that has symbols of four different trades: navigation (anchor), manufacturing (arm and hammer), mining (pick and shovel) and agriculture (plow). And in the middle of the shield is a small red, white and blue coat of arms. And surrounding that coat of arms is the national motto: "E pluribus unum" ("One out of many"); a recognition of our role in the larger nation.

Lead And The Horn Of Plenty

Directly beneath the miner is a pyramid stack of (13) lead ingots. That is a little bit of mining history, a little bit of economic boosterism about the state’s mineral resources. But 13 is important because it’s representative of the 13 original colonies.

The cornucopia is central to Wisconsin’s agricultural history. Overflowing out of that cornucopia you have grapes, apples and what look like oranges. Now I don’t think oranges have ever grown in Wisconsin; so that might be something that needs to be corrected.

The Sgt. Pepper’s Of State Flags?

It’s a little busy to the modern eye. I think a lot of 21st century people gravitate to simplicity, which is a central element in a lot of flags that attract people.

People think of the simplicity of Alaska’s flag, or California's. But there aren’t as many teaching opportunities with those flags as what you have with Wisconsin's.

I still like it. I’m biased because I’m an archivist and a historian. But there’s a lot going on in terms of a classroom and a lesson plan.