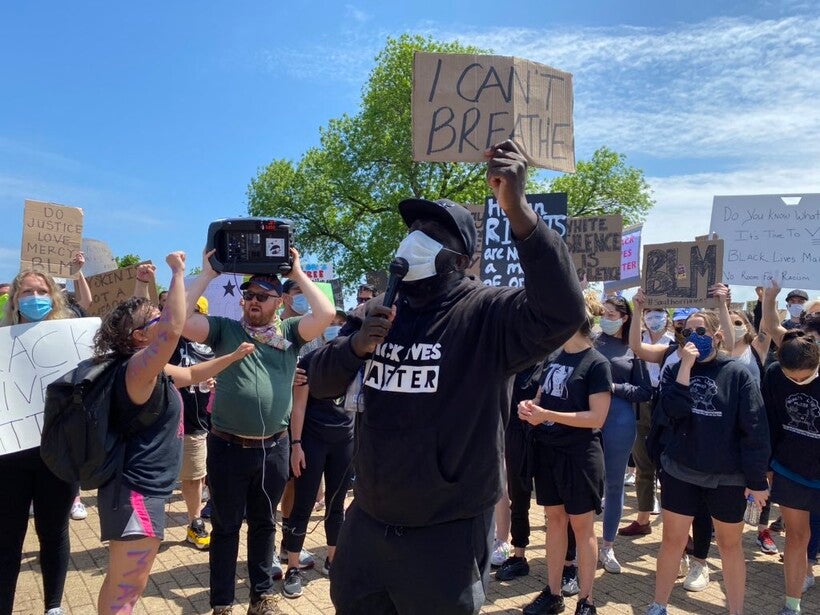 What Black Lives Matter Protesters Want, And Who Has The Power To Give It To Them

People calling for changes to Wisconsin’s criminal justice system, among other things, continue to protest in communities across the state in the wake of George Floyd’s death in police custody in Minneapolis last month.

A number of different groups across the state are organizing protests, and each have their own perspective about needs in their communities. Still, there are common themes to protesters' requests. Those include increased community control over policing, the removal of police officers from schools and more government money spent on supporting black communities.

Here’s a list of some prominent requests, along with a breakdown of who has the power to make the proposed change. These requests were compiled from a letter a Milwaukee advocacy group sent state and local leaders last week, and numerous speeches and social media posts from Madison activists in recent days. WPR's reporting on the protests has outlined similar requests outside the state's two urban centers as well.

Under state law, the governor has the power to order members of the Wisconsin National Guard into service. Mayors, county executives, and local law enforcement officials can request National Guard presence in their communities, but the governor is the one who can activate and deploy the Guard.

3. Remove all police and policing resources from neighborhoods and schools.

Zeroing out a police department’s budget would be done by the local government entity that oversees it. For example, city councils approve city budgets, which include the city police department. The county board approves budgets for the county sheriff’s office. There are also tribal law enforcement agencies, district attorney offices and state law enforcement agencies.

There is also a call from protesters to "defund the police." This may not mean zeroing out police budgets entirely, but rather reducing the amount of money police departments get and what they get it for.

Regarding schools specifically, according to the state Department of Public Instruction, Wisconsin is a local-control state. Decisions like removing police from schools are typically made by local school boards.

Local governments, like city councils, can create and fund things like a civilian oversight board for police. That board, which could be appointed or elected, could have a variety of powers, like the ability to set policies and practices of the local police department.

6. Fire Officer Matt Kenny, who shot and killed Tony Robinson in 2015, from the Madison Police Department.

Under state law, boards called police and fire commissions oversee things like suspensions and firing of police officers. The Madison Police and Fire Commission oversees the hiring, promotion, discipline, and terminations of police and fire personnel in the city of Madison. The five commissioners are appointed by the mayor to staggered, four-year terms.

7. Release all black people from Dane County Jail and transport people who have been diagnosed with COVID-19 to hospitals or secure housing.

The Dane County sheriff doesn’t have sole power to release prisoners. According to a spokesperson for the Dane County Jail, when the jail worked to lower its population by hundreds of inmates during the COVID-19 pandemic, the sheriff worked with a number of other officials, including Dane County judges and local probation and parole agents, to authorize the releases.

There are also a number of inmates at the county jail being held there temporarily on federal charges, waiting to be moved into the state prison system. The county doesn’t have power to release those inmates.

Congress could end the federal program that transfers excess Department of Defense equipment to law enforcement agencies. A bill prohibiting things like transfer of military-grade firearms, armored vehicles and weaponized drones was introduced in 2015, but did not pass.

Individual police departments could opt out of participating in the program.

Between 1994 and March 2020, Wisconsin police departments statewide received roughly $42 million of military equipment, including mine-resistant vehicles, according to data released by the federal government.

These things could be done by a number of levels of government, from city to county to state, in their respective budgets.

10. Audit all government institutions to identify racist practices and deliver a comprehensive plan to address the problem.

The nonpartisan Wisconsin Legislative Audit bureau handles state audits, but can also conduct audits of local government. According to the bureau, most audits are requested by state lawmakers through the Joint Legislative Audit Committee. In addition to individual lawmakers, county and city governments can also initiate audits. For example, the city of Madison hired a California-based company to conduct an independent audit of the Madison Police Department several years ago. The report was released in 2017.