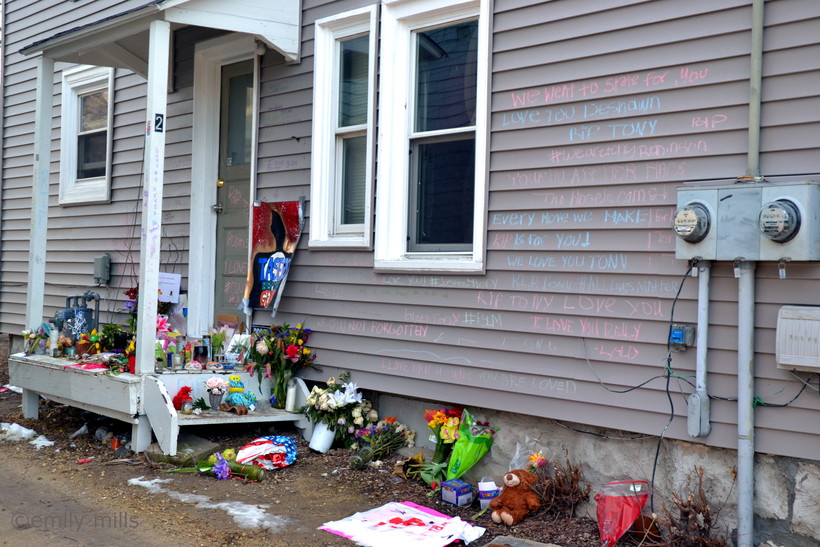 The memorial outside the house where Tony Robinson was killed by a police officer in Madison in March. Photo: Lost Albatross (CC-BY-ND) A white Wisconsin police officer has been cleared of wrongdoing in an internal investigation of his fatal shooting of an unarmed 19-year-old black man.

The Madison Police Department on Wednesday issued a summary of its finding that Officer Matt Kenny did not violate its deadly force policies in the March 6 shooting death of 19-year-old Tony Robinson on the city's near east side. The review comes after Dane County District Attorney Ismael Ozanne decided no criminal charges were warranted in the case last month.

The Wisconsin Professional Police Association supports the finding of no wrongdoing.

"It's not lost on (Kenny) that a family has suffered a loss and this incident will affect him for the rest of his life. But he is eager to get back to doing the job that he loves," said Kenny's attorney and WPPA Executive Director Jim Palmer.

Police Chief Mike Koval said that while Kenny will be put back to work this week, he won't be returning to patrol duty in the near future. He said that Kenny will be assigned to the department's training division with no firm timetable on when he might be back patrolling the streets.

Koval said Kenny will be working with the department's trauma counselor.

The American Civil Liberties Union has called for an outside review of the Police Department's decision to reinstate Kenny, but Koval said there's no need for an investigation of the investigation.

Kenny shot and killed Robinson during a confrontation, in which police say Robinson hit Kenny in the head while high on hallucinogenic mushrooms. He has been on paid leave since the shooting.

Editor's Note: This article was originally an Associated Press story. It has since been updated with reporting from Wisconsin Public Radio.