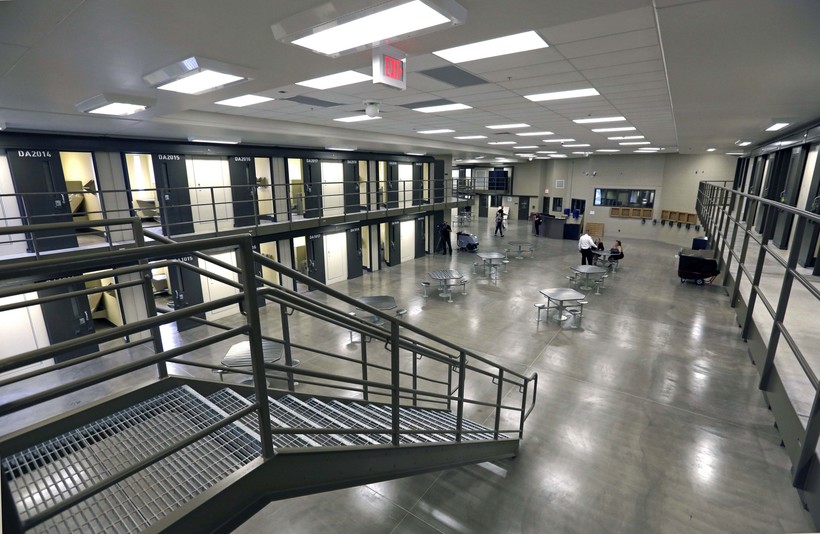 This June 1, 2018, photo shows a housing unit in the west section of the State Correctional Institution at Phoenix in Collegeville, Pa. Pennsylvania Gov. Tom Wolf is issuing an executive order Friday, April 10, 2020, to authorize the early release of up to 1,800 inmates from Pennsylvania state prisons in an effort to minimize the spread of the coronavirus. Jacqueline Larma/AP Photo

Wisconsin sheriffs' offices have introduced temporary actions to reduce jail populations by as much as half in hopes of preventing inmates and staff from contracting the new coronavirus. Measures include allowing inmates with work release privileges to stay at home rather than reporting back to jail.

Two weeks ago, the Chippewa County Sheriff's Office conferred with county health officials, judges and the district attorney's office on an initial plan to begin reducing its average inmate population. Sheriff Jim Kowalczyk said the first step was to let inmates working in the community under the state's Huber Law return home after shifts instead of returning to jail.

"That all went fine," said Kowalczyk. "And it worked so well the first week or so we decided we would then release our non-working Hubers that had the opportunity to be released and could be out in public going to and from work, and we decided that that was our next step and we implemented that."

Kowalczyk said additional restrictions were added to the county's work release program, which included daily breathalyzer tests administered via a kiosk in the county jail's lobby, random drug tests and in-home verification when inmates aren’t working. He said around 10 inmates on Huber have had their privileges revoked and are currently back in jail.

"All our arrests are followed up with a citation, a court date, rather than taking them into custody and bringing them into our jail and then releasing them shortly thereafter," Kowalczyk said. "So, we’ve kind of eliminated daily bonds."

As a result, Kowalczyk said the county jail population has gone from an average of around 120 inmates to between 50 and 60.

In Barron County, Sheriff Chris Fitzgerald said they too are telling prisoners with Huber privileges to stay home. He said they've contracted with a company to provide inmates with GPS ankle monitors to automatically track their movements.

"They were already people that could be out in the public and instead of having them come back from their workplaces and cross-contaminating other inmates, we put them on electronic monitor," Fitzgerald said.

He said inmates are paying for the ankle monitors rather than paying for work release privileges associated with overnight stays in jail. Fitzgerald said the program doesn't add additional costs to the county as a result.

Fitzgerald said the changes to Huber has created additional space to reduce contact between inmates and staff. He said all new inmates are now screened using a thermometer and a questionnaire asking about potential COVID-19 symptoms.

"We have an area where if you get brought into jail ... you will be quarantined in a cell for 14 days and then moved into general population," Fitzgerald said.

During a press briefing Wednesday, Eau Claire County Sheriff's Office Capt. of Security Services Dan Bresina said they've reduced the overall jail population from 281 inmates on March 1 to 143, a reduction of about 49 percent. Bresina said they've also suspended fingerprinting and DNA collection in the county courthouse and worked to reduce the number of new inmates.

"We have reduced average weekly bookings from 92 to this last week of 10," said Bresina. "So, about an 89 percent reduction in our intakes at our facility since March 1 of 2020."

In Dane County the new coronavirus has already made its way into the Dane County Sheriff's Office's three jail facilities. Sheriff Dave Mahoney said they've had 11 inmates report temperatures above 100 degrees with two testing positive for COVID-19. He said sick inmates were removed from the general population and isolated in individual housing units.

There were 11 deputies with high temperatures as well, said Mahoney.

Currently, Mahoney said there are no new positive cases of COVID-19 in his county facilities.

Mahoney said efforts to reduce the number of inmates in Dane County began when the United States began seeing its first outbreaks of COVID-19 infections.

He said they began with diverting the number of new arrests going into the jails by issuing more citations for non-violent crimes in lieu of arrests. But Mahoney said violent offenders or those committing obvious felonies are still being arrested and jailed.

"We reached out to a company by the name of Skytron, which historically provides UVC, high intensity light, disinfecting robots for hospitals and surgical units," said Mahoney.

The robots look like large cylinders. When activated, they expose multiple ultraviolet lights that kill bacteria and viruses. Mahoney said deputies have been taking cultures from jail surfaces before and after the robots do their work. He said they've been highly effective at killing germs.

As counties work to reduce their inmate numbers, a March 20 order by Gov. Tony Evers suspending the transfer of people to the state's prisons has somewhat complicated those efforts. Now, county inmates who were scheduled to move to Wisconsin Department of Corrections custody must stay in place.

"Right now, Wisconsin's overcrowded prisons are a ticking time bomb that threatens the health of all Wisconsinites, especially people of color who are disproportionately impacted by mass incarceration," said Chris Ott, ACLU of Wisconsin executive director. "The very modest steps taken so far by state officials are simply not enough to prevent an outbreak that would strain our hospital system, endanger public health, and claim thousands of lives. State officials have the power to avert this catastrophe — and they have to act now."